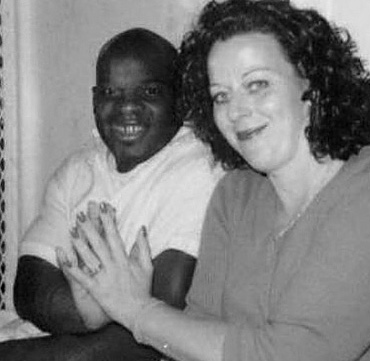 HUNTSVILLE, TX.—Hasan Shakur, aka Derrick Frazier, aka #999284, is dressed all in white. He has a little ‘80s afro and solemn eyes. Despite towering over the prison guards, he retains the youthful face of a 15- year-old. Visiting is only through glass, and Hasan sits in a cage, the telephone pressed to his ear. It is Aug. 29, just a breath away from the 31st. I am visiting someone who has an execution date set. The glass between us reflects the light from the vending machines behind the cages, and it looks like ‘Pepsi’ is written sliding down Hasan’s skin like tears, his face cracked right down the middle.

“Whether they murder me or not on Friday, I’m telling you, watch what Ima do, the ancestors are gonna be proud,” he tells me. Two days later, Hasan Shakur was executed by the state of Texas. The victim’s family cheered when he was pronounced dead, while only his wife and support coordinator Debbie Frazier had been there to support him. Shakur told her to stay strong and that he would love her forever, and tried to get her to smile even as they slid the needle into his arm, according to the Associated Press. He was the 20th Texas prisoner executed this year.

His execution occurred less than one hour after the U.S. Supreme Court rejected three appeals and requests for reprieves, based on affidavits stating evidence that Shakur’s co-defendant Jermaine Herron was the one to commit the actual murder, and an affidavit detailing jury misconduct during his original trial.

Shakur was sentenced to death in October of 1998, at the age of 21. He was convicted of killing Betsey and Cody Nutt, but maintained his innocence in the murders until the very end. “I’ve professed my innocence for nine years and I will continue to profess my innocence for another nine years,” he said on August 31, while strapped down to the death chamber gurney.

There was considerable doubt about Shakur’s conviction. There was a lack of physical evidence at the scene of the crime. Possessions belonging to a neighbor of the Nutts were found with Shakur at the time of his arrest. However, the only substantial evidence linking him to the actual killing was a coerced confession. He was intimidated by the interrogating officer, and promised a 30- year deal in return for his confession. In the videotaped interrogation, the officer informed the 20-year-old of his right to an attorney, to which he responded, “If I could afford one, I would.” The officer began to question Shakur, despite his obvious desire for a lawyer.

“The videotaped ‘confession’ became the prosecution’s smoking gun,” wrote the National Coalition to Abolish the Death Penalty on Aug. 31, 2006. “With no physical evidence linking Frazier to the scene of the crime, the district attorney relied on the coerced confession to convince a nearly all-white jury that this young black defendant was, in fact, guilty of killing a white mother and child.”

Shakur’s lawyer did not mount a defense to show any mitigating circumstances, the fact that he had an abusive father, a drug addicted mother he loved dearly who overdosed when he was 15, or that he didn’t finish the 7th grade. He did not work to show Shakur as a human being. The attorney’s career was marred by prior complaints of misconduct, and he was investigated by the State Bar and placed on probation for three years shortly after trying Shakur’s case.

Shakur’s life reads like a textbook case of black ghetto existence, “I always felt more comfortable in the ghetto, you know?” he said, eyes clear as spring water. But, in his nine years on death row, Shakur transformed himself into a political organizer, prison activist and revolutionary. I met Hasan six years ago when I helped to found the Texas Human Rights Coalition, a prisoner family organizing group. Shakur was an organizer, and worked to build organizations, institutions and more importantly other people’s capacity for leadership. He worked with a number of dynamic prisoners on death row in the Polunsky Unit of his Texas prison. Shakur knew that these men would continue the work they all started and hoped his supporters on the outside would continue working for their release.

“Our people don’t prepare for the future, you know?” Shakur said. “It took us damn near thirty years to recover after we lost Malcolm. We have to set it up so that things will continue even if they take us out, cause you know that’s what they’re going to do.”

He founded Operation LIFE, an organization and newsletter to improve conditions in and out of prison. He organized anti-violence concerts, events, meetings, provided guidance and support, networking, strategic planning and visioning for a number of different organizations. He also served as the Minister of Human Rights for the New African Black Panther Party, a recently-formed organization that works in line with the principles of the original Black Panther Party.

A believer in revolution, Shakur supported all conscious people and all prisoners, especially political. He knew that the conditions he suffered and the judicial railroading he received were inseparable from poverty, from poor education, from criminalization, from racism and white supremacism and capitalism. He knew that the astronomical rates of poverty and incarceration around black people were not a glitch in the system, even if some black people bought into that myth. “That’s where we go wrong, believing that simple shit,” he said on Aug. 29. “The system is on track… it’s on track to ride over us.”

In the wake of his execution, Shakur’s wife and support coordinator Debbie Frazier feels it is important to continue to show his innocence and to bring light to the inherent flaws in the system. “We have to keep working, that’s what we’re going to do,” she said. “We’re just going to keep working, for him, for the others. We’ll free his name.”