THE U.S. VS. JOHN LENNON (2006)
DIRECTED BY DAVID LEAF AND JOHN SCHEINFELD

Flush with all the drama of an illicit affair, John Lennon’s gradual decision to “leave” the Beatles for Yoko Ono remains a major cultural event in American history. With poor Ono still blamed for the dissolution of perhaps pop music’s greatest songwriting team, the political significance of this decision is too often overshadowed – as is

Ono’s role in Lennon’s increased awakening as an activist. A rebel and virtual orphan practically from birth, Lennon had an innate mistrust of authority and a knack for provocation, traits that once filtered through Ono’s gift for performance art, turned them into major figures on the political world stage, equally loved and despised.

The new documentary, The US vs. John Lennon, all too briefly touches on Ono’s influence while, rather unsurprisingly, reinforcing Lennon as the ultimate counterculture icon. Starting with the inception of the Lennon/Ono relationship, the film examines Lennon’s life as a self-consciously political artist whose high profile and very public demonstrations led to an eventual investigation by the Nixon administration, the FBI, and the INS. Co-produced by VH1, this plays like a socially conscious Behind the Music episode (oxymoronic, I know), complete with flashy transitions, interviewees both relevant (Bobby Seale, Tariq Ali, G. Gordon Liddy) and irrelevant (Geraldo Rivera, Ron Kovic), and, thanks to Ono’s involvement, fantastic music. Excepting Liddy, it’s a love-fest from frame one, with everyone chiming in on Lennon’s brilliance while deftly ignoring his infidelity, glibness and Springsteen-esque abuse of the working-class-origins card.

Still, the real prize here is archival footage of Lennon himself, that increasingly rare rock star who, despite his faults, offers an articulate voice for change, and who cuts through the film’s unrepentant asskissing with a genuine sense of focused commitment. Unlike many of his contemporaries, Lennon actually did raise awareness about key issues of the era (especially Vietnam), and his Gandhi-inspired pacifist stance was so noble it looks almost quaint today. As one interviewee comments, Lennon always sacrificed his own image for the greater cause, refusing to bother with what other people thought of him as long as they got the message. Try and imagine greedy Paul McCartney (the George Lucas of music) ever even considering this…

Talented, witty, photogenic, confident, Lennon was in many ways the anti-Nixon, so it’s not terribly shocking to learn how the disgraced president and his cronies put concerted effort into tapping his phones, trailing his car, and eventually starting deportation proceedings. 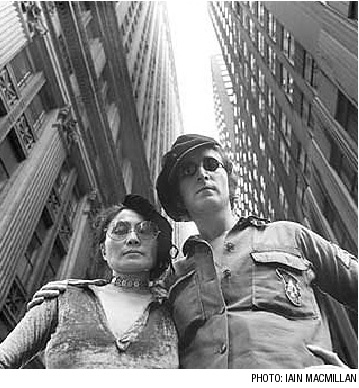 The U.S. vs. John Lennon is currently playing at Landmark Sunshine Theatre
at 143 E. Houston St.