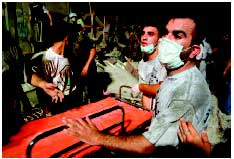 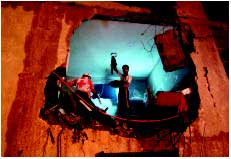 BEIRUT, Lebanon—All 20 members of Ali Hussein’s family thought they were safe. They had escaped the constant bombing in South Lebanon and found refuge in the Beirut suburb of Shiyah. It was far enough away from the heavily bombarded neighborhood of Dahiye to offer them a sense of security.

All that changed on the night of Aug. 8. At 8 p.m. Israel bombed the residential building in which the Hussein family was staying, resulting in the single deadliest attack of the 34-day war.

At least 41 people were killed. Ali, his wife and a 9-year-old son survived only because the balcony they were sitting on was blown off the building and thrown across the street when the missile hit. His wife’s back is broken and his son is burned badly.

When Ali found out his mother died he cried. When he discovered 16 other members of his family died he fainted.

Speaking to him in his hospital room, Ali said he didn’t have the courage to tell his wife and son the news. Instead he lied and told them they were safe in another hospital.

As some sense of normalcy returns to Lebanon’s streets and the news media move on to other events, one can only think of Ali. The war may be over, for now, but the effects of it are long-lasting and profound.

Dahiye, the southern suburb of Beirut hardest hit by Israel, looks like the aftermath of Sept. 11, about a hundred times over. Almost 200 buildings were completely demolished in this residential neighborhood during the war. Another 200 were badly damaged. The smell, the cement-filled air, is an instant throwback to that day in New York City.

The U.N. Interim Force in Lebanon estimates that Israel dropped 5,000 bombs per day on the country or 170,000 bombs in all.

Nine hundred factories, 600 small businesses and at least 15,000 homes are gone. The country’s two main power plants look like twisted junkyards. The oil spilled from these destroyed facilities has spread 75 miles up the coast, turning Lebanon’s tourist beaches into blackened wastelands. It will cost an estimated $180 million to rebuild the electricity grid; the water treatment and delivery system requires another $70 million.

“I have never seen destruction like this,” said water and sanitation specialist Branislav Jekic in a UNICEF statement. “People want to move back to their communities. But whether they stay or not will depend on the availability of water.”

Two weeks into the ceasefire Israel is maintaining its air and sea blockade. Beirut still doesn’t have 24-hour power.

In every village in the South a top priority is campaigns to inform people on how to avoid the estimated 300,000 unexploded cluster bombs. One woman in the town of Yahmour, which is rife with the live bomblets, lost her leg as she swept away debris in her kitchen. At the time of this report, 39 people have been injured and 12 killed by these devices since the ceasefire was established. The toll rises daily; many of the casualties are children playing in the rubble.

Tobacco and banana fields, primary sources of income for families in the south, are also littered with bomblets. De-mining groups say it will take over two years to make farm lands safe. But many families can’t wait that long and are already risking their lives to put food on the table.

Israel hoped that by bombing the infrastructure of Lebanon, the Bush administration’s neoliberal showcase in the Middle East, the Lebanese would blame Hezbollah and its leader Hassan Nasrallah for the devastation. The Israeli Chief of Staff, Lt. Gen. Dan Halutz, told the New York Times on July 15 that the airstrikes were intended to deliver “a clear message to both greater Beirut and Lebanon that they’ve swallowed a cancer and have to vomit it up, because if they don’t their country will pay a very high price.”

Instead, support for Hezbollah soared to 87 percent and crossed all religious lines, according to a poll conducted on July 26 by the Beirut Center for Research and Information. Many seemed to agree with Water and Energy Minister Mohammed Fneish, one of Hezbollah’s two cabinet officials, who said, “If joining the government’s parliament is a national duty, then so is defending the country.”

“Hassan Nasrallah is the only one acting like a true leader right now,” said Nancy, a Christian living in the northern city of Tripoli.

Indeed, Hezbollah is winning even more support with its quick response to the urgent needs of people. Hezbollah has offered furniture and up to $12,000 in cash for one year’s rent to any family made homeless by the war. That is six times the dollar amount that survivors of Hurricane Katrina received from FEMA. They are even helping families through the difficult process of finding available apartments.

“I lost my home,” Hassan Bashir, father of four, told The Indypendent minutes after he received $12,000 at a makeshift Hezbollah compensation center. “The government has done nothing. If I had to lose my home again for a victory against Israel, I would do it.”

The Lebanese government has a compensation plan also, but it is only for families who lost a loved one. So far, there is no government plan to help the country recover.

Meanwhile, in Dahiye, bulldozers and teams of volunteers coordinated by Hezbollah’s “Construction Jihad” (which includes participation from the Christian Free Patriotic Movement Party) are busy clearing roads of debris and removing dangling chunks of concrete from partially destroyed buildings. One demolition crew we talked to said they were not contracted by anyone. They have an agreement with Hezbollah to clear the rubble from a destroyed bridge in exchange for any scrap metal they can recover.

The sophistication of the rebuilding effort is remarkable. Hezbollah divided the suburb into a grid. Each square in the grid is represented by a team of building coordinators who pool resources. Each building has one coordinator and a team of volunteers, most of whom are residents. This ensures that the aid is both efficient and tailored to the needs of each family in the area.

Many wonder where the government is and say it is being sectarian by not taking an active role in the rebuilding efforts.

“We are represented in the government,” Dr. Ahmad Malli, a member of Hezbollah’s Political Council said. “I don’t want to make apologies for the government but we have to be objective. There are no existing governmental institutions that are ready to face this kind of destruction. Yet, we have an ethical responsibility towards our people, and we can’t accept that so many are homeless. That is why [Construction Jihad] took the initiative.”

The Bush administration has offered $230 million in reconstruction aid and assistance (including military), but it also stands ready to prosecute any American who assists in Hezbollah’s efforts as it is labeled a “foreign terrorist organization” by the U.S. State Department.

To Hezbollah, the U.S. aid offer is part of “the same story of profiteering” from both war and peace. Abbas Yasine, a coordinator of the Hezbollah compensation committee in Dahiya told us, “On the one hand they sell the bombs, and on the other they want the contracts that will repair the damage. We don’t want any help from the American government. We will only accept popular help from [individual] Americans.”