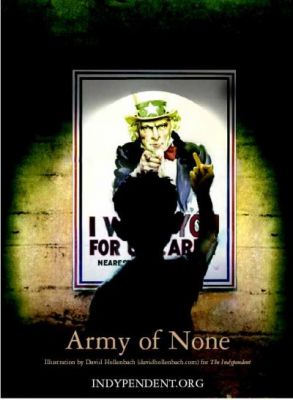 In response to popular demand, The Indypendent has turned the striking illustration by David Hollenbach, entitled “Army of None,” into a four-color poster that is sure to be a big hit among students, youth and peace activists.
The Indypendent received so many requests for copies that of the graphic, which was the cover illustration of its special counter-recruitment issue dated October, 19 2005, that the paper decided to turn the original artwork into a high-quality, four-color glossy poster measuring 18″ x 12″ that is now being offered for individual and bulk sales here.

With a readership of more than 50,000, The Indypendent is New York City’s leading alternative paper, having won more awards from the Independent Press Association for reporting, opinion writing, design and photography than any other local paper for three years running.

The Indypendent has also been at the forefront of covering the antiwar and counter-recruitment movements that have grown up around the country for the last five years. The counter-recruitment movement is a grassroots student- and youth-led response to aggressive military recruiting methods used by the Pentagon to attract soldiers for an
unpopular and open-ended war in Iraq.

The armed services have responded to declining enlistment rates by hiring thousands of new recruiters, spending billions on slick ads and marketing, lowering educational standards, forcing soldiers to stay in the military, overlooking histories of criminal violence and substance abuse and raising the enlistment age to 42.

Many activists say current recruiting methods amount to a “poverty draft,” targeting urban and rural youth with limited economic or educational prospects by dangling offers of enlistment bonuses of up to $40,000.

An “Army of None” gives dramatic expression to how many people feel about the Pentagon and its wars.

As the poster promises to be an excellent fundraising tool for activist groups, The Indypendent is offering copies in bulk at a special discount rate to antiwar, counter-recruitment and youth and student groups. For more details about bulk purchases email contact@indypendent.org or call 212-221-0521.

Individual copies of an “Army of None” can be purchased online or by email — Contact@indypendent.orgor by phone at 212-221-0521.