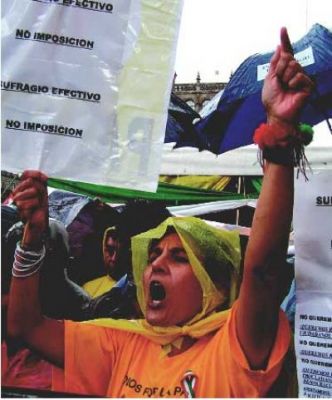 JOHN GIBLER REPORTS FROM MEXICO CITY—On July 29, Antonia Acevedo Perez, 59, locked up the Star Eatery – a lunch stand outside a popular market in Oaxaca City – and left for the nation’s capital. She was among tens of thousands who left their homes and jobs in rural Mexico not to head to the border or seek employment in bigger cities, but to defend their votes. On July 30, in what became the largest political mobilization in the country’s history, more than two million people took to the streets of Mexico City to demand a vote-by-vote recount of the 41 million ballots cast in the July 2 presidential election.

After months of illegal campaign tactics against him and serious anomalies in the official vote count, the center-left opposition candidate, Andrés Manuel López Obrador, alleged fraud and initiated a series of massive marches and protests in Mexico City. At the July 30 march and protest gathering, López Obrador called for his supporters to set up encampments down several major avenues and the Plaza de la Constitución, or Zócalo, the symbolic heart of Mexican politics, and to stay there until the federal electoral court granted the vote-by-vote recount. Thousands of people from every state in the country, and from every neighborhood in Mexico City, heeded his call, covering the Zócalo, Madero, Juárez, and Reforma avenues with the plastic roofing of large, white tents.

But the court denied a full recount, and instead, on Sept. 5, certified the results of the election and declared right-wing Felipe Calderón Hinojosa of the National Action Party (PAN) president-elect. The court’s ruling chided President Vicente Fox from the PAN for illegally campaigning on behalf of Calderón and acknowledged the illegal use of slanderous television advertisements calling López Obrador “a danger for Mexico,” but failed to make public the results of an official recount of 9 percent of the ballots, further fueling the widespread belief that the election had been stolen. Calderón is scheduled to be inaugurated on Dec. 1. Amid the hundreds of protesters who had gathered outside the guarded courthouse to await the ruling, Lilia Mogel, a hairstylist in her early 40s, covered her face in her hands and wept. She stepped back from the swarms of reporters and photographers and leaned against the wall. “They mocked our votes,” she said. “Just because we are poor, they ignored us.”

Millions who supported López Obrador’s focus on addressing poverty and uprooting corruption share Mogel’s outrage and her opinion that the poor in Mexico are objects of scorn and derision for the nation’s politicians. The presidential campaigns drew attention to sharp class divisions in Mexico, which the post-electoral conflict has exacerbated.

Now, after six weeks of camping out in the streets, López Obrador and his supporters are raising the stakes. They called for a National Democratic Convention on Mexican Independence Day, September 16, during which more than a million “delegates” were convoked to vote on forming a “government in rebellion,” naming López Obrador their “president in resistance,” and laying the foundation, they claim, for a New Republic. “There are going to be two presidents here, one for the rich and one for the poor,” Acevedo Perez from Oaxaca said after registering for the convention at a sign-up table on the edge of the Zócalo encampment. “We, the poor, are going to be with our president, hence the convention, hence the resistance.”

The ambition behind the National Democratic Convention is staggering: nothing less than naming an alternative president and setting in motion the overhaul of the three branches of government. López Obrador spoke in the grandest of terms in the days before the convention, saying that it would mark “the abolition of the regime of corruption and privilege” and serve as the foundation of a new, “legitimate government.” But he also backtracked a bit. “What would it mean in practice if the convention decides to build a new government?” he asked during a recent speech. “A protest against the usurpation.”

Jesusa Rodríguez, an accomplished actress and theatre director, is López Obrador’s Master of Ceremonies for his daily speaking events in the Zócalo and one of the main organizers of the convention. One day last week, in between meetings, cell phone calls, handing files and papers to helpers and introducing actors on stage, she sat down for a brief interview. I asked how were they planning to organizing the discussions and voting of more than a million people packed into the Zócalo and surrounding streets.

“That is the big question,” she answered. “When you hold a speech before 2 million people that is one thing, but how do you hold a convention? Thus, what this is all about is a founding act, and the convention will continue for the months or years necessary. The point is not to begin and wrap everything up on the 16th. It will be the founding act of a New Republic. Then the work will begin.”

The convention organizers set out to register more than a million “delegates,” more than twice the number of people that can be packed into the Zócalo. The delegates, proudly wearing their registration badges, were asked to vote on whether they recognize “the government of usurpation,” whether they will create a government in resistance or a national civil resistance coordination committee, and whether they will elect a president, a government chief, or a coordinator. During a recent speech in the Zócalo, when López Obrador listed these options, the crowd chanted, without hesitation: “Presidente! Presidente! Presidente!”

A MILLION IN THE STREETS

On Sept. 16, the Zócalo housed the forces of two different Mexicos. At 9:20 a.m., President Fox watched as over 20,000 soldiers held an Independence Day parade in the Zócolo, emptied of its tents and protesters only the night before. But by 6:20 p.m., the Zócalo and all surrounding streets were filled to capacity with over a million “delegates” there for the National Democratic Convention.

Billed grandiloquently as a National Democratic Convention, López Obrador’s gathering leaves much open to criticism. López Obrador and his inner circle laid out the choices, leaving the million or so participants to vote only yes or no on either/or issues. The “voting” itself was carried out by hand raising, violating one of the principle tenets of electoral democracy: the option of vote secrecy. The million or so “delegates” represent less than one percent of the population. Moreover, the differences between the choices were mostly symbolic; whether, for example, one calls López Obrador Coordinator or President in Resistance, his plans will be the same. López Obrador and the Convention organizers blatantly ignored the vote of the people when it came to the membership of the National Commissions of the government in resistance. Point number ten on the “ballot” was the approval of 30 members for three different commissions – the leadership of the movement. Voters were asked to approve all 30 with a single show of hands. The crowd unanimously supported the proposal with their hands in the air, while shouting in unison: “No Ímaz! No Ímaz! No Ímaz!” Carlos Ímaz, discredited in a national bribery scandal in 2004, was on the ballot for the Civil Resistance Commission. But López Obrador and his organizers waited for the shouting to die down, and then moved on without so much as addressing the issue.

The symbolic power of the convention itself, however, is significant. López Obrador is able to mobilize massive numbers of supporters – too many for the state to attempt a police or military repression – and his emphasis on addressing endemic poverty and the marketing of influence in the government resonates deeply with millions upon millions of Mexicans. But López Obrador is not alone in calling people out of political complacency. This has been the year of living quixotically on the Mexican left, of dreaming up new ways of organizing and protesting and of taking these new ways into the streets.

Since Jan. 1, the Zapatista Army of National Liberation has set out on a nationwide listening tour called The Other Campaign (see p.10) where Subcomandante Marcos has traveled as the anti-candidate, calling out the voices of the underdogs of the Mexican left to share their stories of organizing and resistance. Also, in Oaxaca, a radical teachers union protest exploded into an unarmed grassroots uprising after Governor Ulises Ruiz Ortiz unsuccessfully tried to break up the teachers’ encampments with teargas and truncheons on June 14.

The teachers and outraged citizens shut down the state government and took over statewide television and radio stations in a continuing, pitched battle to oust Ruiz Ortiz.

López Obrador has pulled the largest numbers of people to his mobilizations, but has failed to allow them to take proactive roles in the movement beyond standing in the sun and the rain, filling encampments and raising their hands. I asked Acevedo Perez what she hoped to see come out of the convention.

“What we hope for is to improve Mexico,” she said, “to no longer be trampled on by the rich, those that invalidated our votes. We want the people to choose their government. Without the people, a president is nothing.”

PHOTO: A supporter of López Obrador shouts against electoral fraud at a Sept. 1 rally in Mexico City. PHOTO: JOHN GIBLER