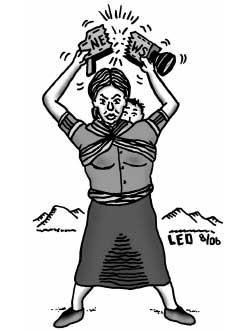 Calling the Aug. 29 ruling by Mexico’s top electoral tribunal rejecting any significant fraud in the July 2 presidential election a “true coup d’etat,” leftist Democratic Revolution Party (PRD) presidential candidate Andrés Manuel López Obrador has called for increased civil disobedience. Tens of thousands of López Obrador’s supporters have been camped out for weeks in Mexico City’s zocalo (center plaza) and along major thoroughfares to protest alleged voter fraud, and millions have mobilized in other cities to demand a full recount.

The tribunal rejected a full recount. A partial recount was conducted in 11,839 precincts or about nine percent of Mexico’s 130,000 precincts, and found “irregularities” but said both candidates lost votes. According to Narco News, the partial recount found 45,890 votes above the number of voters in a total of 3,074 precincts and 80,392 ballots of citizens who did vote are missing in 4,368 precincts. If these trends continue in the remaining precincts it would mean that more than 1.5 million votes were either stolen or stuffed – rightist National Action Party (PAN) candidate Felipe Calderon leads by only 243,000 votes. The tribunal must declare a winner or annul the election by Sept. 6. —Bennett Baumer
OAXACA UPRISING INTENSIFIES

Meanwhile, in the southern Mexican state of Oaxaca, an annual teacher’s strike has turned into a massive uprising as more and more splinter groups join the protesters, demanding Gov. Ulises Ruiz Ortiz resignation, better working conditions and an end to free-for-all capitalism.

APRIL 29 Oaxaca teachers begin a strike demanding improved conditions in schools. The teachers’ strike, which occurs every spring, usually last a few weeks and ends with a slightly better contract

MAY 22 At least 70,000 teachers and supporters establish a peaceful protest encampment in the main square of Oaxaca de Juarez, the state’s capitol.

JUNE 14 Gov. Ruiz Ortiz launches a crackdown on the strike. Riot police descend on the protesters with tear gas, smoke grenades, stun grenades and firearms. They forcibly remove some of the protesters.

JUNE 15 The teachers reoccupy the square, joined by thousands of students and leftists who refuse to leave.

JULY 5 The Popular Assembly of the People of Oaxaca (APPO), a broad coalition of dozens of unions, indigenous groups and aid organizations declares itself the governing body of Oaxaca. They begin a series of mega-marches, involving up to 500,000 people, no longer demanding wages but the removal of Gov. Ruiz Ortiz from office.

AUGUST 7 Indian Organizations for Human Rights in Oaxaca call for a Red Alert, seeking reinforcements for blockades of government buildings. During the week of Aug. 14, approximately four members of the APPO are fatally shot by police. Arrest warrants are issued for over 50 activists.

AUGUST 21 The encampment at Channel 9 is attacked, rendering the antenna unusable in the ensuing damage. Moments later, APPO takes over at least ten commercial radio stations.

AUGUST 29 Stores and businesses in the state capitol strike to demand an end to violence and blockades. As we go to press, a mega-march is scheduled for Sept. 1, starting in the community of San Felipe and ending in the center of Oaxaca de Juarez.