The people of Oaxaca are waiting anxiously to see if Ulisses Ruiz Ortiz, the state’s embattled governor, will be forced out of office in talks between the federal government and the Popular Assembly of the Peoples of Oaxaca (APPO), a broadbased social movement that emerged this summer out of a failed attempt to crush a striking teachers union.

“Can you imagine what is going to happen to us if Ulises doesn’t fall,” says Emma, a twenty-something secretary, mother-to-be and daughter of a retired teacher. “We’ll all be screwed. It will be so much worse than before.”

Located in the rugged mountains of southern Mexico, Oaxaca (pronounced “whuh-hahk-uh”) is one of Mexico’s poorest and most indigenous states with over 60 percent of the population being of native origins. 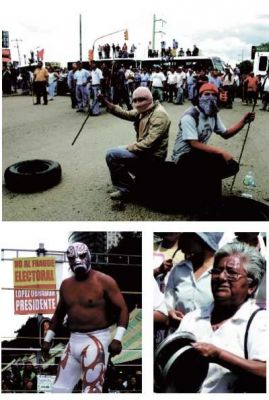 Filling the vacuum left by a discredited state government that is unable to meet in public buildings now blockaded by outraged citizens, APPO claims to be the voice of the people and their organized political expression. However, it could not endure without the decisive participation of the general populace.

RED DAWN
A clear example of this has been public reaction to the 70,000-strong state teachers union. Every year the union goes on strike in May leaving emptying classrooms throughout the state empty and filling the streets of the capital with protesters. Traditionally, the union and the state government both flex their political muscles until an agreement is reached concerning wages, hours and conditions. The people, normally apathetic to the demands of the union, quietly put up with the inconveniences involved. “The teachers only fight for their own personal benefit at the expense of the children and their education” was a refrain I repeatedly heard.

This year was different. At first, Oaxacans stood by and watched as Ruiz Ortiz undertook public works that destroyed much of the cultural patrimony of this colonial-era city as a pretext to divert public money to the campaign of the PRI’s presidential candidate and other lesserknown politicos. More brutal than his predecessors, Ruiz Ortiz maintained order through a campaign of repression and harassment against social organizations and the press. The tide turned when Ruiz Ortiz tried to violently repress the annual teachers’ strike with riot cops and tear gas. On the morning of June 14, now known as the Red Dawn, teachers mounted a counteroffensive against the attack, regaining control
of the city’s central plaza and winning the hearts and minds of a generally apathetic and powerless populace.

Waking up to a city filled with tear gas and violence, the people took charge of the situation through collective action. Suddenly, everyone was against Ruiz Ortiz. People were mobilized throughout the state by the teachers union and a heterogeneous mix of social and political organizations. As seemingly everyone in Oaxaca has a family member who is a teacher, a tidal wave of resentment against the government grew as a total of five “megamarches” were organized with the largest reaching the astonishing number of around 300,000 people, or one out of ten people who live in the state.

In the ensuing weeks, radical social movements of workers, peasants, students, women and others aligned with the teachers literally kicked out the state government by blockading public buildings and repelled paramilitary style attacks by barricading the city. The government violence helped to maintain the spirit of resistance alive and fortify public support for the protests. The radio stations occupied by protesters endlessly repeated the battle cry of Oaxacans: “Ya Cayó, Ya Cayó, Ulises Ya Cayó” (He Has Fallen, He Has Fallen, Ulises Has Fallen) and the song “Venceremos” (We Shall Overcome.) After years of mistreatment, poverty and the depopulation of rural communities due to migration, the general populace was ready for change.

“For a long time nobody said or did anything. It was only the teachers who stood up for us,” Emma explains. “But we never did anything about it. We never knew what to do. We didn’t think change was possible.”

“I JUST WANT IT TO BE OVER WITH”
Now over three months have passed and there seems to be no end to the conflict. Living behind barricades and trying to earn a living in a collapsed economy in a lawless city suddenly overrun with crime and insecurity has created doubts among the people as to the probability of Ruiz Ortiz’s departure. Popular participation has fallen lately and putting up with disturbance has become a natural part of life.

Excesses committed by the leadership of the APPO and their continuing radical discourse in times of dialogue and relative peace have created a widening gap between the “masses” and the supposed “vanguard” formed by the diverse social forces coalesced into the APPO.

“At first it was something really beautiful,” Emma says, referring to the bonds of unity and solidarity built among the people in opposition to the government. “Now I just want it to be over with.”

Fatigue has befallen even the teachers. In many of the barricades protecting occupied radio stations and their antennas, the number of teachers who turn out has significantly dwindled. The teachers, whose strike pay is normally protected under Mexican labor laws, have now gone nearly a month without pay and the effect on morale is huge. Some teachers are looking for parttime work to make ends meet. “I can’t believe the apathy even among my fellow teachers. It is scary being out here, sleeping here at night because you never know when they will come for us. It is scary but even scarier is the thought that this guy doesn’t go,” explained Yadira, a single mother and teacher manning the barricades in El Rosario neighborhood.

Oaxacans are waiting on word from Mexico City where movement leaders have traveled to initiate formal talks with the federal government to resolve the crisis. If the conflict isn’t resolved soon, it will continue until December when Ruiz Ortiz will have fulfilled two years in office and his allies in Oaxaca’s state legislature can choose a successor instead of having to call statewide elections.

Should Ruiz Ortiz and the PRI hold onto power, it is clear who will bear the brunt of the coming tide of repression: the same common people who rose up in joyous defiance against an unjust government believing in their personal and collective capacity to affect change. “They know who we are. They know who has been helping,” explained Emma.“If we don’t win, they will be coming for us.”

Masked wrestlers play out the conflict between Felipe
Calderón and Andrés Manuel López Obrador at the protest
encampment on Reforma Avenue on Aug. 6, 2006. PHOTO:
JOHN GIBLER;

On Aug. 1, more than 3,000 women from the Popular
Assembly of the People of Oaxaca (APPO) marched through
Oaxaca de Juárez banging on pots and pans to demand the
ouster of Gov. Ulisses Ruiz Ortiz. PHOTO: JOHN GIBLER