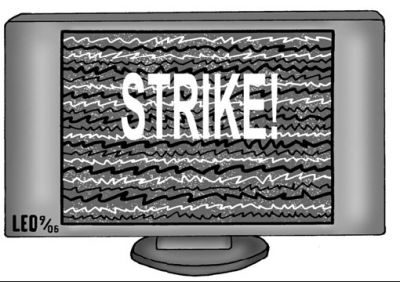 A reality show that features Tyra Banks putting a group of wannabe models through fashion boot-camp hardly seems a likely candidate to be at the center of a potentially industry-altering movement. Yet it is.

On July 21, the twelve-person writing staff of America’s Next Top Model became the first reality TV writers to go on strike.We ask to be represented by the Writer’s Guild of America West (WGAw). We ask for a fair wage and basic benefits such as health insurance, pensions, wage minimums, residuals and credits. Although no other reality TV writers have gone on strike, over 1,000 have signed cards indicating that they want union representation.

While reality TV writers do not write dialogue, we are storytellers who take hundreds of hours of footage and create structured stories in script form. We have contributed greatly to the success of a highly profitable TV show which is about to start its seventh season.We are only seeking the basic benefits that others in our industry enjoy. The new CW network (which is born of a merger between UPN’s parent company CBS and Warner Brothers) is adamantly opposed to this. Why all this resistance over 12 people seeking relatively inexpensive benefits? Conceding will open a Pandora’s box for the entertainment industry.

Reality shows have become a significant source of revenue for the entertainment industry, largely because these shows are generally non-union. When “The Real World” came along in 1992 and kicked off the reality TV genre as we know it, no one thought reality TV would be around long. The shows became a free-for-all in terms of wages and working conditions. Fourteen years later, reality shows are a mainstay of the industry. Nine of the top 20 television shows for the 2005-06 season were reality programs. While revenues have risen, the cost to make these shows remains a fraction of that of traditionally scripted shows.

Unionization in reality TV is strongly discouraged. No reality show writers have been able to unionize. A few positions, like editors on some reality shows, have been able to organize with other unions. With the WGAw, however, there is an even greater incentive for the network to dig its heels in against us.

The proliferation of reality shows has resulted in less covered work for WGA members, and thus has weakened the guild’s power. The WGA will be renegotiating its master contract with the networks in 2007, and an industrywide strike is a distinct possibility. Reality television, it turns out, could be a major bargaining chip if that happens. If reality writers are part of the WGA we will be part of that strike. If not, the network will maintain a source of cheap programming to help them ride out a long WGA strike.

So the 12 of us are caught between a rock and a hard place. The network and the union have locked horns, while we linger on the picket line, stuck in a stall-riddled National Labor Relations Board process that will likely last longer than our jobs. My hope is that a mediator will emerge to find a way to remove us from the middle of this tug-of-war and get us a fair deal. Then again, fair deals don’t seem to be much in fashion these days.