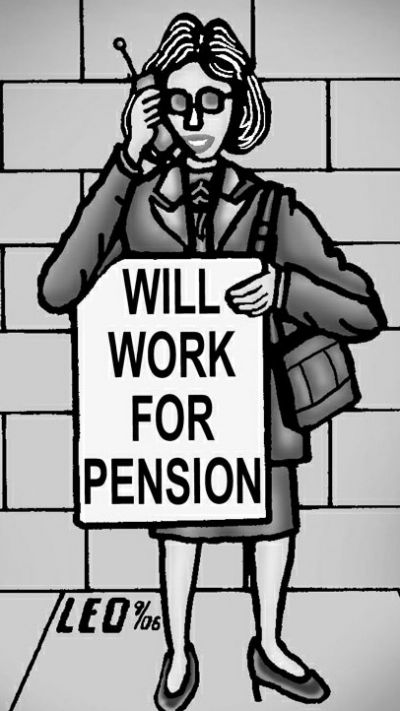 After a debate that ground on mind-numbingly, for years, Congress in August birthed one of the most momentous pieces of domestic policy legislation in decades. The troublesome infant was the Pension Protection Act of 2006, and it affects every working person in the United States.

Briefly, the bill compels companies that offer traditional, guaranteed pension plans to their workers to cover 100 percent of their long-term liabilities within seven years. Many employers’ plans are now seriously underfunded, meaning they aren’t projected to have the money to pay all benefits to their retirees going out the next several decades. Airlines, which have especially serious pension shortfalls, were gifted an additional 10 years to get their houses in order. Taxpayers benefit, congressional sponsors of the bill contend, because the government, which insures traditional pension plans, would otherwise be on the hook should any of these companies go bankrupt. Some 44 million workers and retirees are in traditional pension plans today.

The bill provides a big boost to the financial services industry, too, which has made billions supplying investment services to 401(k) plans – the vehicle that’s quickly replacing traditional pensions. 401(k)s give workers a retirement savings account, sometimes with employers chipping in a contribution, but with no guaranteed minimum benefit when they retire. More than 45 million American workers have 401(k)s.

Previously, conflict-of-interest rules made it difficult for firms that manage retirement accounts for 401(k) participants to also offer them broader investment advice. The Pension Protection Act eases these rules, with supporters arguing that workers desperately need advice and encouragement to save if they’re going to build up a substantial nest egg to retire on. It also makes permanent the $15,000 limit on annual 401(k) contributions, which was upped from $11,000 in Bush’s 2001 tax-cut bill.

What does all this mean – especially for workers in their 20s and 30s, who probably don’t have a job that offers a pension, or who have a 401(k) to which they can’t contribute much since they’re too busy repaying college loans or just keeping up with rent or health insurance premiums?

Not much at all, say George W. Bush and the 93 senators who voted for the bill. Companies still have every reason to want to scrap their traditional pensions, because the bill makes them more expensive to maintain. It actually could undermine healthy plans by making it easier for companies to pull money out of them. But traditional pensions aren’t much good to younger workers anyway, proponents say. The workplace isn’t like it was in the days of lifetime employment: A person in her 20s is likely to change jobs frequently between now and the time she retires. A 401(k) account you can take with you – benefits built up in a traditional plan you can’t.

But were the old days so different? According to studies by the Employee Benefit Research Institute, younger workers were always more prone to change jobs than veterans, even privileged whites in the 1950s. They gravitated toward stabler jobs that offered traditional pensions when they reached their 40s and 50s and started to think about retirement. Today, workers are likely to remain peripatetic for longer, but they still need to accumulate some substantial assets once retirement looks to be only a couple of decades away.

Mutual fund companies and other financial services providers have been touting 401(k)s as the solution for years. Congress, through legislation dating back to the last round of pension reforms in the 1970s and including the Pension Protection Act, has been encouraging employers to get out of the retirement business and workers to shoulder more of the responsibility.

But the record of 401(k)s enabling workers to build up assets has been dismal. Fully one-third of employers in a recent study by Deloitte Consulting said that only about 70 percent of their workers participate in their 401(k)s, and less than a quarter reported participation rates above 90 percent. Only 13 percent of companies in the survey agreed that most of their employees “are/will be financially prepared for retirement.”

Then there’s Enron. “America’s most innovative company” (according to Fortune magazine) was just one of thousands of employers that loaded up their 401(k)s with company stock. Settlements last year with the defunct energy company and this August with the estate of Ken Lay, the late Enron CEO, are likely to net the 20,000 ex-employees only a fraction of what they lost. Yet a survey last year by consultant Greenwich Associates showed that company stock still makes up an average 23 percent of 401(k) plans’ assets.

A RECIPE FOR DISASTER

Are workers to blame for low participation rates and, often, poor investment decisions? Financial services firms, employers, and conservative lawmakers generally think so. Education and professional advice are the answer, to be supplied by the same firms that sell investment products to workers. But the evidence is that the crushing cost of health care, education and housing have destroyed Americans’ ability to save and turned the United States into the world’s biggest debtor society. In a recent ACNielsen survey, 22 percent of Americans said they have no spare cash after paying their living expenses. If you’re a worker in your 20s or 30s, the pressure may be compounded when your Baby Boomer parents need elder care, and skyrocketing medical costs force you to step in to help – maybe even caring for them yourself.

Thus, the Pension Protection Act encourages employers to slough off their traditional pension obligations while leaving employees with little ability to build up assets on their own. Ironically, Bush signed it into law just as he was testing the waters for a revival next year of his proposal to let Social Security partially dissolve into a system of voluntary private investment accounts.

Few long-time observers believe there’s much chance that employerbased pensions can be revived – employers simply don’t want to offer them anymore. With hard-pressed workers unable to save, Social Security’s role as the only truly guaranteed retirement benefit becomes more crucial than ever. With Bush again stumping for privatization, the November elections will help determine its chances of survival.