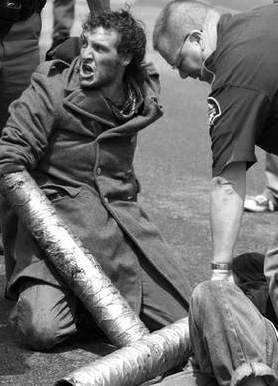 Most early SDS activity was oriented toward civil rights in the South, where the Student Nonviolent Coordinating Committee (SNCC) played a key role in inspiring SDS, both philosophically and by example.

April 17, 1965 – First National March Against the Vietnam War in Washington, D.C. SDS assembles over 20,000 against the Vietnam War and begins its meteoric growth. Refusing to exclude communist sympathizers or members, SDS breaks with its “parent” organization, the League for Industrial Democracy.

April 4, 1968 – Martin Luther King assassinated. Over 100 cities erupt in rebellion. Revolution is in the air.

From April 23-27, 1968 — Columbia Strike Protesting both the university’s close ties with the Pentagon and its racist treatment of residents of the Morningside Heights neighborhood, 700-1,000 rebellious students take over and occupy a number of campus building for five days before they are violently cleared out by 1,000 cops. National SDS proceeds to issue a public statement calling for “two, three, many Columbias.”

Aug. 19-25, 1968 – Chicago DNC. Confrontations occur between Chicago police and antiwar protesters during the Democratic National Convention. Under the direction of Mayor Richard Daley, police in many cases indiscriminately club not only antiwar protesters, but also bystanders, neutral observers and reporters all on prime-time national television.

1969 – SDS splits. SDS’s final national convention ends in factional chaos between strait-laced Maoists and the weed-smoking bomb throwers who would become the Weather Underground, an urban, clandestine guerrilla army that took its name from a Bob Dylan song.

March 6, 1970 — Weatherman. Three Weatherman killed in a Greenwich Village townhouse when bombs they were making exploded prematurely. The Weather Underground carried out hundreds of non-lethal bombings of high-profile corporate and governmental targets over the next six years before peetering out.

May 6, 1970 — Student Strike. 1,000 campuses go on strike against government killings at Kent and Jackson State, the expansion of the Vietnam War into Cambodia.