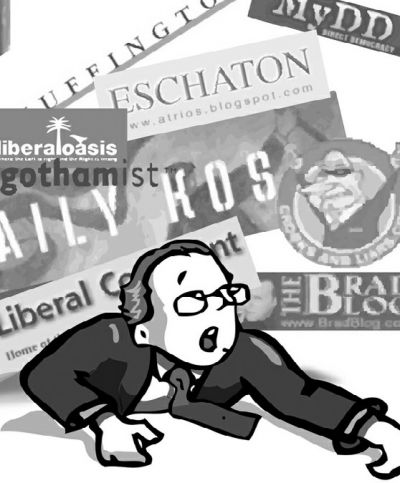 When anti-war candidate Jonathan Tasini soundly lost his Sept. 12 primary bid to unseat Democratic Senator Hillary Clinton – and yet still managed to double his expected percentage of the vote with 17 percent – most of the liberal blogosphere reacted with a giant yawn.

Why the difference between the chilly reception afforded Tasini as opposed to the rapturous embrace of Ned Lamont, the millionaire cable TV executive who recently toppled Sen. Joe Lieberman in Connecticut’s Democratic primary? A number of explanations have been offered – Clinton is (slightly) more liberal than Lieberman, Tasini ran a poor campaign, Tasini was vastly underfunded compared to Lamont, the vote isn’t just about the war. But in the end, there can be little doubt that Tasini was seen early on by much of the “netroots” – the leading lefty blogs (Daily Kos, MyDD, Eschaton, the Huffington Post) that dominate the liberal wing of the internet – as a “loser.”

Perhaps the defining characteristic of the most powerful liberal political blogs is their pragmatism, their passion to win. The absence of such a killer instinct among segments of the American left has long been a source of frustration for many progressives; as ex-60’s radical turned Democratic Party activist Todd Gitlin wrote in the summer of 2001:
“The right also tends to win in the great game of organization – and in a mass democracy, that means the great game of politics. Our side likes to have fun… the left will not beat them until it is just as serious – yes, just as fanatical – about winning.”

For pragmatic progressives like Gitlin, then, there seems to be a new reason to hope. The netroots “crashing of Washington’s gates wasn’t about ideology, it was about pragmatism,” wrote Daily Kos founder Markos Moulitsas in The Washington Post in the summer of 2006. Closer to home, and even more bluntly, Daily Gotham contributor Michael Bouldin had this to say about his vision of politics: “I believe strongly that politics is not about “taking a stand” or “expressing feelings” or other such therapeutic drivel; it is about winning.”

Some longtime progressive activists fear, however, that the realism of much of the liberal netroots may be sacrificing a long-term vision in the name of a short-term electoral strategy.

It was Tasini’s candidacy, as much as anything else, that demonstrates both the playing- to-win mentality of much of the liberal blogosphere and the potential cost exacted by this pragmatic outlook. Most lefty blogs, with the exception of the Huffington Post, either ignored Tasini entirely or systematically denigrated his candidacy, especially in comparison for the near-holy crusade that became the Lamont (or rather, the anti- Lieberman) campaign.

Despite the numerous “member diaries” written about Tasini in the past few months on the Daily Kos, there was no “featured” diary about the Democratic candidate for the month leading up to the primary. Atrios of the Eschaton blog ignored Tasini entirely. MyDD, one of the prime movers and shakers behind the Lamont campaign, had this to say about Tasini: “I had interest in Tasini early on, but I did some research and concluded that Tasini didn’t have the infrastructure ready to seriously challenge Senator Clinton. I didn’t blog about Tasini.” And MoveOn.org, perhaps the leading internet-based organization representing the so-called “liberal wing” of the Democratic Party, resisted months of pressure from their members before they held a last-minute members primary pitting Tasini versus Clinton (no candidate ended up winning enough votes to secure a MoveOn endorsement).

The internet has become the driving new force in Democratic Party politics and a handful of key sites have come to have disproportionate clout because of the tendency of web traffic to cluster around “first adopters,” i.e. sites that have established themselves early on in the emergence of a new internet-based niche markets.

These sites, which emphasize pragmatic, election-focused, win-at-any-cost politics of the Daily Kos and related blogs like MyDD, exploded in popularity during the run-up to the Iraq War, powered by a potent combination of savvy anti-war rhetoric, advanced interactive technologies, and their position as one of the few online websites that simultaneously spoke to mainstream Democrats and affected a semi-radical edge (Makos Moulitsas is famous for his blunt dismissal of the murder of four American contractors in the Iraqi city of Falluja in 2004, a comment he would certainly never make today: “They are there to wage war for profit. Screw them.”)

When the dust settled in the aftermath of John Kerry’s loss to George W. Bush in the 2004 election, the election-minded netroots was poised to seize the mantle of the Democratic Party. “They want to make me into the latest Jesse Jackson, but I’m not ideological at all,” Moulitsas told the Washington Monthly in January 2006. “I’m just all about winning.”

The key for the future of netroots-based politics will come if and when the Democratic Party finally ends its losing ways and returns to political power – possibly as early as this coming November. Will the liberal activists of the internet remain harsh but loyal critics once their party grabs hold of levers of government? Or, as seems more likely, will they repeat the mistakes of the Clinton era and simply be thankful to have temporarily arrested the Democrats’ slow but steady decline?