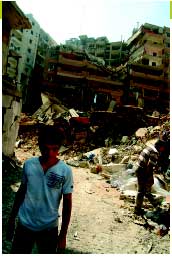 After Sept. 11, there was a moment where one could imagine an intelligent response: Instead of bombs and belligerence, the United States could have used discussions and development to address the root causes of terrorism. But that was too much to expect of the American Empire.

To the Bush administration, the dead of Sept. 11 represented a unique opportunity to remake the world through war.

It took mere hours for Rumsfeld to direct his underlings to find intelligence that could serve as a casus belli against Iraq. It took nine days for Bush to impose a with-us-or-against-us mentality upon the world. And it took barely six weeks for the structures of a police state to come into being with the Patriot Act.

There was little doubt at the time that the eagle was soaring. Few opposed the power grab at home, the Taliban were scattered in a few weeks, and nations rushed to enlist in the “war on terror.” It was no longer just cranky Marxists who talked of imperialism; liberals and conservatives alike hailed a reinvigorated Pax Americana.

Five years later, however, the Bush administration has dragged the world into three wars – Afghanistan, Iraq and Lebanon – that have diminished U.S. power dramatically. The U.S. military is being ground down by guerrilla warfare in Iraq, reviving fears of post- Vietnam impotence. With a civil war, of U.S. making, raging in Iraq, troop levels are on the rise and GIs are having to conquer Baghdad once more, leading to a surge in combat deaths in the last half of August. White House plans to draw down troops to influence the November elections have been dashed.

The cost in treasure is enormous, adding to huge budget deficits that burden the U.S. economy. Diplomatically, the Bush administration has lost credibility because of the weapons of mass destruction fable, constraining its attempts to attack Iran under similar pretexts. Russia, most visibly, has signaled that it will not back economic sanctions against Iran.

In Lebanon, the Bush administration hoped that Israel could bomb Hezbollah into submission and check an increasingly confident political Shi’ism. Instead, Sunni Arab regimes in Egypt, Saudi Arabia and Jordan were exposed as U.S. tools by lining up with their patron against Hezbollah. The American Empire’s desperation for allies is so great that the paper of record describes Saudi Arabia’s hand-chopping theocracy as a “moderate.” U.S. leverage in the region is at a low. Israel is suffering an existential crisis from its historic defeat, and Iran, Syria and Shi’ite parties in Iraq have been strengthened. Most of all, the Arab world has found a new hero in Hezbollah and Hassan Nasrallah.

Yet this only hints at the global chaos that has been unleashed. Historians will define the post-Sept. 11 era as one of geopolitical instability, as the Atlantic Alliance fragmented and new power centers and regional blocs took shape. It’s also marked by state-sponsored barbarism that has swept away any pretense of international law, the accelerating shift of power from West to East, wars fought and governments toppled for access to energy reserves, and the triumph of neoliberal economics.

Approaching the fifth anniversary of Sept. 11, what began as a war against political Islam has become a wider war of the haves against the have-nots. The war on terror has become a convenient excuse for Israel, India and Russia to justify their mayhem in the Middle East, Kashmir and Chechnya. All three play the victim, using the inevitable backlash from bloody occupations as justification for yet more repression.

There is a host of camp followers: Japan’s nationalists, eager to exploit North Korea’s missiles as an excuse to re-militarize; Egypt’s nepotistic regime warring against its own people; Colombia’s strongman Uribe waging a dirty war for the benefit of oil companies and narco-trafficking paramilitaries; thuggish, U.S.-aligned regimes from El Salvador to the Philippines. Even France, darling of left-leaning Europhiles, has joined in, threatening nuclear strikes against “terrorists.”

Afghanistan was supposed to show the new U.S. approach, how it would rebuild the country to lift the yoke of extremism. But as in Iraq, blinded by a free-market ideology, the U.S. reconstruction effort has failed. What’s left is an impotent government dependent on warlords, a resurgent Taliban that controls much of the country, and a populace bitter at unfulfilled promises of security and development.

However desperate the situation is in Afghanistan, with Western troops being bled by guerrilla warfare, Pakistan may be in worse shape. Ruled by a dictator, Pakistan has abandoned its populace. Corruption and military spending consume the budget, leaving almost nothing for health, education and social welfare. Gen. Pervez Musharraf is considered an ally, perhaps because he’s allowed the country to be flooded by FBI agents, offers no protest when hundreds of its citizens are disappeared and has launched his own war in the border regions.

But that war, or wars rather, is going poorly. Northwest Pakistan is convulsed by a low-intensity conflict between U.S.-equipped Pakistani troops and militant Islamists, many of them backers of the Taliban and Al Qaeda. Now, Musharaff has inflamed inhabitants of Baluchistan by killing a venerated leader. The conflict there mirrors many others the world over – a poor people who gain nothing from extensive oil and gas reserves that are developed for the benefit of ruling elites and global energy hogs. Add a nuclear arsenal into the mix and Pakistan is one of the world’s most dangerous powder kegs.

Even as the U.S. Empire declines, neoliberalism still holds the center. The China-Wal-Mart model dominates the economy: rock-bottom wages, workers with no rights and monopoly capital clear-cutting everything in its path. China is the obvious beneficiary from the global chaos as manufacturing facilities and dollars flow its way. It’s biding its time, however, knowing that it is decades behind the United States economically and militarily.

Not all is bleak. South America is breaking the Washington consensus on free trade that demands the global South prioritize loan payments over social welfare. Venezuela is the most visible opponent of U.S. elites and has dabbled somewhat successfully with grassroots development and regional trading alliances.

The war on terror has revealed an atrophied U.S. political system. With little opposition from the Democratic Party, the media, business elites or the public, the Bush administration has assumed unprecedented powers. The notion of the “unitary executive” – that all lawmaking power inheres in Bush – is a modern-day version of the divine right of kings. Whatever judicial or legislative restraint is put on the presidency has been summarily rejected in hundreds of instances so far.

After Sept. 11, some scholars pointed out that the American Empire was in decline. The choice, it was suggested, was between a controlled descent and a crash-and-burn landing. The Bush administration has chosen the later. Even as a wounded giant, the United States can wreak havoc for decades to come.

The most pressing issues of the coming decades are not ones of fighting terrorism, which is but a cover for authoritarian rule and transferring wealth to the rich, but the environment, global warming, sustainability and the redistribution of resources. The choice is between a Hobbesian world – “A war of all against all” – over precious resources or a global solidarity of fulfilling needs versus consumption. It’s not very American, but it’s the best option we have.