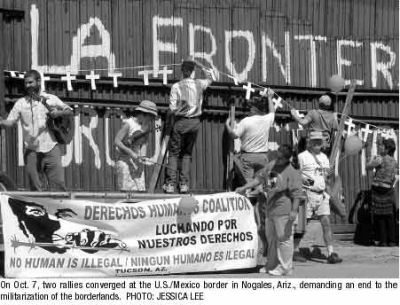 TUCSON, Arizona—A consortium of private defense contractors led by Boeing received the go-ahead from President Bush Oct. 4 to begin work improving the “virtual fence” along the U.S./Mexico border based on integrated technology including satellites, sensors, aerial drones, and infrared cameras.

“The strategic partnership allows the department to exploit private sector ingenuity and expertise to quickly secure our nation’s borders,” said Chertoff in a Sept. 21 press release.

DHS and Boeing plan to approach border security through a “threat-based approach,” in which localized segments of the U.S. border are prioritized by the perceived risk of terrorism. Within eight months, Boeing plans to have a “model of the entire solution mix” deployed within southern Arizona.

“The first initial task is to place additional mobile towers, equipped with sensors, radars and cameras for U.S. Border Patrol to use along the 28-mile U.S./Mexico border within the Tucson Sector. This equipment will be deployed without too much distraction to local communities,” said Robert Villanueva, spokesperson for Boeing Integrated Defense Systems. The next phase would be to place permanent larger towers with similar detection technology in the more remote areas of the border, Villanueva said. An estimated one million undocumented workers crossed into the United States last year.

The most controversial part of SBInet is the construction of a 700-mile-long border wall, which would cross most of Arizona, and portions of New Mexico, California and Texas. Environmental organizations have spoken out against the plan, noting the detrimental consequences to unique biodiverse regions in the southwestern U.S. “The only living things the walls won’t stop are people,” said Michael Finkelstein, executive director of the Center for Biological Diversity, in a press release.

Earlier this year, Defenders of Wildlife released On the Line: the Impacts of Immigration Policy on Wildlife and Habitat in the Arizona Borderlands, a report detailing the detrimental environmental affects of border policy in Arizona over the last 15 years. In the 1990s, immigration enforcement efforts increased in border cities of San Diego, Calif. and El Paso, Texas, forcing undocumented migrants to risk crossing the border in remote, undisturbed areas. More than 3,000 people are estimated to have perished in the southwestern deserts attempting to cross into the United States since the 1990s.

However, speculation arose recently about whether the wall will actually be built after the U.S. House and Senate agreed to distribute the funding to a variety of border projects. Congress members also pledged that Native American tribes, members of Congress, governors and local leaders would get a say in the precise placement of any structures.

Border communities have spoken out against the possible fence. On Oct. 7, two rallies converged at the U.S./Mexico border in Nogales, Ariz., demanding an end to the militarization of the borderlands.

“Just like private contractors in Iraq, the entire point of SBI net is for private companies to make a killing off of the situation,” said Geoff Boyce, media spokesperson for No More Deaths, a coalition of border activist and humanitarian groups. “Militarization of the border is a diversion from the real issue, that U.S. neoliberal policies such as the North American Free Trade Agreement (NAFTA) are much of the reason behind the immigration into the United States”.

Indigenous voices cried out against the wall during a three-day Border Summit on the Tohono O’odham Nation in southern Arizona at the end of September. A Border Summit Draft Declaration was released noting that the wall would further damage environmental, cultural and natural resources for the Nation, which was already split in half by the creation of the U.S./Mexico border.

“Since 9-11, the U.S. government has ratcheted up its attacks against the indigenous residents of the United States. In southern Arizona, these attacks have come in the guise of borderland defense,” said Ofelia Rivas in an interview posted on the website O’odham Voices Against the Wall.