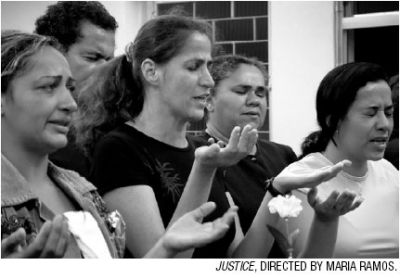 Justice, a documentary by filmmaker Maria Ramos, tells the story of several young men going through the Brazilian court system. Petty criminals, or accused of being such, they pass through a system that is totally lacking in humanity. The court’s bureaucracy is revealed in its processing of the accused with the disinterest and apathy that we might expect at the DMV. Defendants are pushed through the system regardless of their innocence or basic human needs.

Ramos allows the viewer to be the proverbial fly on the wall as defendants and their families go through Brazil’s judicial system from the courtroom to overcrowded jail cells. Ramos refrains from using narration and “talking heads,” preferring to let the images and sounds captured by the cameras speak for themselves. At no time does the action appear unnatural, and the subjects never acknowledge the camera’s presence, even in the few scenes where we look at the family life of the public defender. This lack of acknowledgement hastens the question that all documentaries inevitably face: How “real” is what’s happening on the screen?

Ramos’ unobtrusive style, which has been praised by some, often leaves issues unaddressed. The film makes no attempt to establish a sociopolitical context for what we are seeing and is often predictable in simply displaying Brazil’s “third worldness” without furthering the viewer’s understanding of the images it presents. While the film tells the personal story of the defendants effectively, those looking for an in-depth analysis of the Brazilian judicial system will leave the theater unsatisfied.