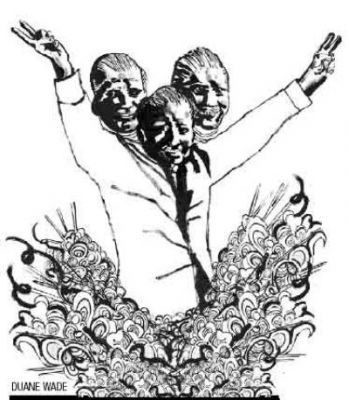 There’s the Richard Nixon of the history books, and then there’s Nixon’s Nixon – a powerful satire by Russell Lees. Set on Nixon’s last night in office, the play follows a fictional conversation between Tricky Dick and his secretary of state, in which the two men plot to keep the doomed president in power.

Nixon (played by Gerry Bamman, whose mannerisms sometimes resemble Jack Nicholson’s) is desperate, uninhibited, and sometimes hilarious. Stuffy, intellectual and also desperate, Kissinger (Steve Mellor) listens to his boss spew expletives like “pig shit” and “cock-suckers” without so much as a smile. In one particularly amusing scene, Kissinger impersonates Mao Zedong so that the president can reenact his pre-Watergate glory days.

For all its humor, the play is not without an important political message. Protesters stood outside the theater, calling on passersby to overthrow the current administration, and it’s easy to imagine Kissinger replaced with Condoleezza Rice and Nixon with George W. – never mind that the script was written in the late nineties. When the fictional Nixon plots to provoke a crisis along the Chinese-Soviet border in order to detract attention from Watergate, one can’t help but think of the very real mess in the Middle East.

At Kissinger’s prodding, Nixon abandons his dream of going down in history as a hero and resigns, convinced that his reputation is beyond repair. “This cloud over your head is more than a cloud,” the secretary of state tells his boss, as if referring to recent fiascos such as Guantánamo or Katrina.

The real-life Nixon called his resignation in 1974 the start of a healing process “so desperately needed in America.” A similar process is needed today, though chances are slim that Bush will follow in the 37th president’s footsteps – or Tony Blair’s, for that matter. What America needs is a Kissinger to convince Bush to resign.

Nixon’s Nixon will play at the Lucille Lortel Theatre through Oct. 28. For more information see www.impactfestival.org.