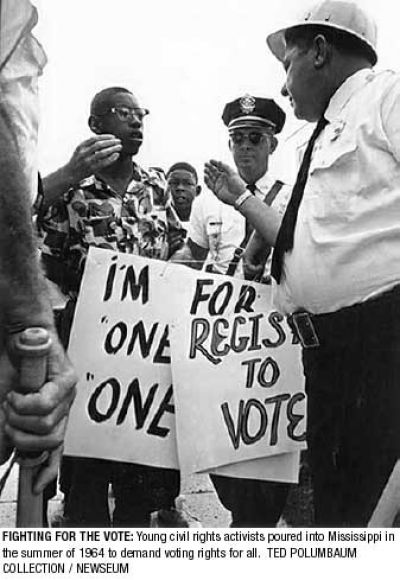 While many voting rights activists are focused on problematic new voting machines, others are working to fend off an onslaught of new state and local voting initiatives that could restrict access to the vote.

Among the new voting requirements recently contested in courts are state-issued photo IDs and tight restrictions on voting registration drives. Proponents of such requirements tend to be conservative white Republicans who argue that tighter rules are essential for preventing voter fraud. However, critics say such laws will unfairly impact the poor, the elderly, the disabled, and college-age students, all of whom tend to vote more for the Democrats.

According to the Brennan Center for Justice, more than 25 percent of the voting-age citizen population is not registered to vote. Many non-profit organizations and advocacy groups have long responded by sponsoring voter registration drives, but attempts to closely regulate their activities are impeding their efforts.

In New Mexico, registration applications must now be submitted within 48 hours of completion and all employees and volunteers must disclose their identities with the state. In Colorado, applications must be submitted within five business days. Failure to do so could result in $500 per day fine per late application. A federal court in Miami recently blocked enforcement of a Florida law that would have placed hefty fines ranging from $250 to $5,000 for noncompliance of application submission deadlines.

In Ohio, a pending federal lawsuit charges state officials with failing to provide voter registration opportunities in public assistance offices, as required by the National Voter Registration Act (NVRA). The plaintiffs charge they were not informed of their right to register to vote during visits to public assistance offices. According to the lawsuit, only 68 percent of Ohioans in households making less than $15,000 a year were registered to vote in 2004 versus 92 percent of individuals in households making $75,000 or more. According to a July 2005 report by the advocacy groups Demos, Project Vote and the Association of Community Organizations for Reform Now (ACORN), virtually no states are complying with NVRA.

Efforts by some states to require voters to show photo IDs have also sparked a number of legal battles. Georgia and Missouri recently struck down laws requiring voters to present state-issued photo ID’s, however in Florida and Indiana this requirement still exists. Acquiring a state-issued ID can be time-consuming, costly, and may entail obtaining additional government documentation such as a birth certificate or social security card. Critics argue that such a mandate is akin to reinstating the poll tax, which existed in some southern states until it was abolished by constitutional amendment in 1964. Supporters of the ID card argue that it will protect against voter fraud, particularly among undocumented immigrants. However, very little evidence of “imposter voting” has been produced.

Arizona recently passed a new voting regulation that requires providing proof of citizenship at the polls that could unfairly impact more mobile populations such as low-income residents and college-age students, who are less likely to have access to the required documents and who may lack transportation to obtain them.

Further hampering of new voter registrants has occurred through a database matching program in states such as Maryland and Florida that require first-time voter registrant applications to match personal identification numbers to the Motor Vehicle Administration or Social Security Administration databases. If an accurate match is not made, the application is rejected. This method has been criticized for common errors in entering data entry such as transposed fields and misspellings. Women that have changed their last names and people who may have unfamiliar names are disproportionately affected. A September 2004 test run in New York resulted in 20 percent of eligible new voter registrants rejected due to data entry errors.

State laws that deny felons the right to vote disenfranchise more than four million people. This disproportionately affects Black men – an estimated 13 percent of whom cannot vote, according to the Sentencing Project. Civil liberties advocates recently filed a petition with the Inter- American Commission on Human Rights citing that New Jersey and other states with disenfranchisement policies, particularly against those on parole and probation, violates universal human rights.