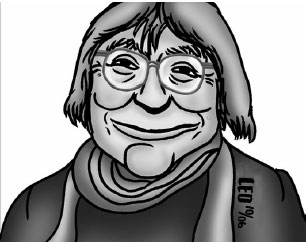 Activist attorney Lynne Stewart could receive as much as 30 years in prison on Oct. 16 when she is sentenced by a judge for her conviction of giving material aid to terrorism. Her defense team, which has gathered 800 letters from fellow attorneys, former clients and supporters, asks for no jail time in light of her age and compromised health.

Stewart, 67, a longtime member of the National Lawyers Guild, wrote a letter to Judge John G. Koeltl, who will sentence her, offering an explanation for her violation of the Special Administrative Measures (SAM), which forbid her to pass on communications from her client Sheik Omar Abdel Rahman. It is not an apologia, as has been represented in the major media. She does, however, confess to naivete, to being spread too thinly, and to giving insufficient attention to the possible repercussions of her representation of the Sheik.

Ever eloquent, she writes, “My greatest regret is that this case may bring added burdens to my fellow lawyers who already understand that to be intimidated by one’s adversaries precludes being able to fully represent the client.”

Stewart’s letter reminds the judge that many judges have called upon her in the past to represent difficult clients.

If the conviction of Lynne Stewart was unjust, even more so is the conviction of Mohammed Yousry, the York College adjunct professor whose only crime was to translate for the Sheik when Stewart visited him in prison. Yousry was pre-cleared for this assignment by the Department of Justice. He was never asked to sign the SAM and only translated what was approved by Stewart. Tapes of the attorney-client conferences reveal the Sheik’s growing irritation with Yousry who drinks, smokes and is married to an evangelical Christian. For his translations services, Yousry was convicted of conspiracy to materially aid terrorism and faces 21 years when he is sentenced with Stewart. He refused several offers to turn state’s witness against Lynne Stewart.

The National Lawyers Guild, the National Association of Criminal Defense Attorneys, the Conference of Black Lawyers, and the Center for Constitutional Rights have all issued statements in support of Lynne Stewart. The American Association of University Professors has defended the academic freedom of Mohammed Yousry.

Ann M. Schneider is a member of the Lynne Stewart Defense Committee.