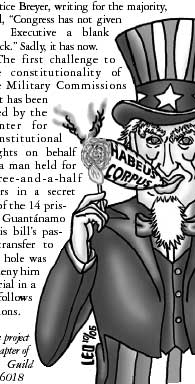 When Congress approved the suspension of habeas corpus for “unlawful enemy combatants” on Sept. 29, it thrust the United States back nine centuries in time to a world where subjects could disposed of at the whim of kings who ruled by divine right.

Habeas corpus, from the Latin “produce the body,” started as a straightforward means to require prisoners to present themselves for testimony at trial. What began as a weapon of the courts became with time protection against arbitrary detention, and still represents the cherished principle that unlawful detainment can be immediately challenged.

Writs to this effect first appeared in the 11th century, making habeas corpus common law in England by the time rebellious barons forced King John I to codify it in the 1215 Magna Carta (or “Great Charter”), the foundational document of the Anglo-American legal system.

Article 39 read: “No freeman shall be taken or imprisoned or disseised or exiled or in any way destroyed, nor will we go upon him nor will we send upon him except upon the lawful judgement of his peers or the law of the land.”

To prevent kings from whimsically interfering in matters of detention, habeas corpus was further codified into English law in 1679. The principles of habeas corpus were also embedded in the U.S. Constitution when the 5th and 6th Amendments were approved in 1791.