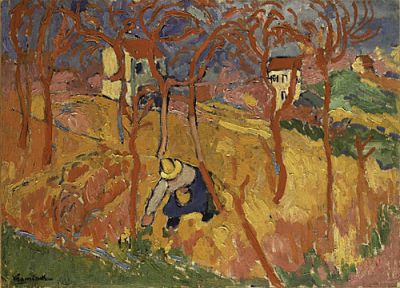 Review Of Cezanne To Picasso: Ambrose Vollard, Patron Of The Avant-Garde At The Metropolitan Museum Of Art Through Jan. 7, 2007.

Art is one of the few things of marketable worth produced by Western society since Napoleon Bonaparte overturned the French Revolution in the coup d’état of 1799.

Disastrous events followed at intervals – the Napoleonic era and continental wars of the early 19th century, the Metternich system, the failure of the Revolutions of 1848, the Franco-Prussian War of 1870, the French Commune, World Wars I and II, the termination of the Soviet Union, and the present Middle East catastrophe. As those events occurred, artists throughout the 19th and 20th centuries endeavored to counter them with their works.

Generations of artists in France presented a different vision of life from industrialization, national aggrandizement, accumulation of wealth, colonization and war. One manifestation of their efforts is now on exhibit at the Metropolitan Museum of Art in a celebration of Ambrose Vollard (1866-1939), the Parisian art dealer, author and publisher of art books.

The exhibit is a triumph – it glows with Vollard’s personality (his “unique blend of ‘somnolence and evasion’ was the opposite of the hard sell,” writes curator Ann Dumas) and with his alertness to the great artists he represented, from Cézanne to Picasso, Van Gogh, Gauguin, Renoir, Degas, Matisse, Bonnard, Redon, Rouault and Maillol, along with the numerous portraits the artists painted of him.

Other splendid examples of their work on exhibit include a Cézanne self-portrait of monumental solidity; Van Gogh’s Starry Night Over the Rhone, an affecting complement to Starry Night in the MoMA and Gauguin’s masterpiece, Where Do We Come From? What Are We? Where Are We Going?