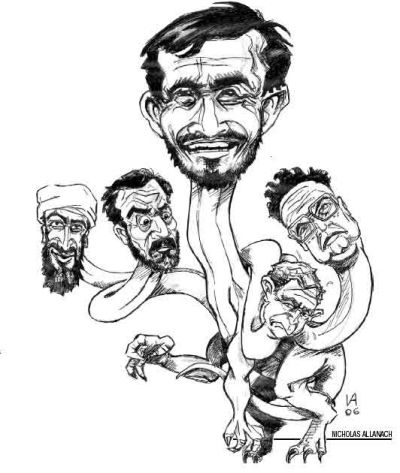 It should come as no surprise if the Bush administration undertakes a preemptive war against Iran sometime before the November election.

The steps will be these: Air Force tankers will be deployed to fuel B-2 bombers, Navy Cruise missile ships will be positioned at strategic points in the northern Indian Ocean and perhaps the Persian Gulf, unmanned drones will collect target data, and commando teams will refine those data. The latter two steps are already being taken.

Then the President will speak on national television. He will say this: Iran is determined to develop nuclear weapons; if this happens, the entire region will go nuclear; our diplomatic efforts to prevent this have failed; Iran is offering a haven to known al Qaeda leaders; the fate of our ally Israel is at stake; Iran persists in supporting terrorism, including in Iraq; and sanctions will have no effect (and besides they are for sissies). He will not say: …and besides, we need the oil.

Therefore, he will announce, our own national security and the security of the region require us to act. “Tonight, I have ordered the elimination of all facilities in Iran that are dedicated to the production of weapons of mass destruction…” In the narrowest terms this includes perhaps two dozen targets.

To have any hope of success, such a policy would require attacking at least 400 targets, including the Revolutionary Guard. But even this presumes the Iranian people will respond to a massive U.S. attack on their country by overthrowing their government. Only an administration inspired by fantasy could believe a notion such as this.

For a divinely guided president who imagines himself to be a latter-day Winston Churchill (albeit lacking the ability to formulate intelligent sentences), and who professes not to care about public opinion at home or abroad, anything is possible, and dwindling days in power may be seen as making the most apocalyptic actions necessary.

Gary Hart (D-Colo.) served in the U.S. Senate from 1975 to 1987 and was a two-time presidential candidate. This is excerpted from a longer article that originally appeared at huffingtonpost.com.