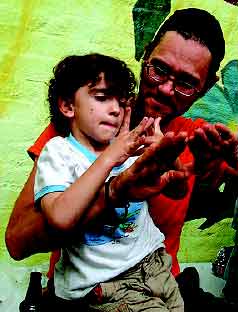 Brad Will was someone who seemed to be everywhere.

Most knew him as an Indymedia activist, but he was also a passionate environmentalist, freedom fighter, musician, and anarchist who was also close to the Earth First! movement where he was a beloved character by many. Here are some of the campaigns he was involved in:

STEAL THIS RADIO 88.7 FM – Brad was an active participant in this irrepressible Lower East Side pirate radio station that defied the Federal Communications Commission (FCC) and helped spark a movement that culminated in 2000 when the Clinton Administration reversed itself and began granting Low Power FM broadcasting licenses to hundreds of community groups around the country.

SQUATTING – Brad was a part of a movement that turned abandoned buildings on the Lower East Side into free housing. With squatters already under siege from the Giuliani administration by the time he moved to New York in 1995, Brad stunned his fellow squatters in Feb. 1997 when he snuck back into an East 5th Street squat and emerged atop the roof to try and stop a giant wrecking ball which had begun battering the building.

FOREST DEFENSE – Freight hopping and dumpster diving back and forth across the country, Brad hooks up with old-growth forest defenders in Oregon. The forest defenders used an innovative range of innovative direct action techniques including “locking down” to blockade logging roads and “tree-sitting.” Will once conducted a tree sit while living in a helicopter cargo net dangling 200 feet up in the canopy of giant Douglas firs and hemlocks

COMMUNITY GARDENS – As Mayor Rudy Giuliani moved to wipe out hundreds of community gardens (see page 8) in the late ‘90s, Brad helped energize the community gardens movement by introducing non-violent direct action techniques learned in the Pacific Northwest. The More Gardens Coalition that Brad helped found would later migrate from the Lower East Side to the South Bronx to help mobilize community support for dozens of endangered gardens in Melrose Commons and Morrisania.

BATTLE OF SEATTLE – Experienced forest defenders like Brad train thousands in non-violent direct action and spearhead mass protests that shut down a World Trade Organization meeting in Seattle in November 1999. Images of police firing tear gas and rubber bullets into throngs of mostly youthful protesters speed around the world and help inspire a new generation of radical activists here in the United States.

GLOBAL JUSTICE MOVEMENT – Brad travels to Prague, Quebec City and Quito among other locales to participate in mass convergences against corporate-dominated trade summits and international financial institutions like the World Bank and the International Monetary Fund. As he travels, he continues to develop a far-ranging network of friends and allies that enables him to immerse more deeply in the global justice movement, especially in Latin America. When he’s in New York, he continues to actively participate in Food Not Bombs, Critical Mass bike rides and efforts to save community gardens in the South Bronx.

INDYMEDIA – Inspired by the Zapatistas and launched on the eve of the Seattle WTO protests, Indymedia’s innovative self-publishing newswire inspires thousands of activists to “become the media.” Local Indymedia Centers quickly take root in over 100 cities on all six continents. In 2001, Brad becomes involved with the New York City chapter and contributes as a writer, photographer, videographer and audiographer.

SOUTH AMERICA – Brad makes his first extended trip to South America. Living on the outer edges of Buenos Aires, Argentina, he finds an economically-devastated populous organizing and mobilizing through neighborhood assemblies, factory takeovers, communal soup kitchens and more to regain control over their lives from the bottom up. Inspired by the militant, grassroots social justice movements that were flourishing throughout Latin America, he would return again and again to chronicle and share in the struggles of the oppressed in various countries including Bolivia, Ecuador and Brazil. In February 2005, he was nearly killed when Brazilian police violently raided an encampment of 12,000 landless squatters who had occupied an abandoned industrial park for nine months.

GLOBAL WARMING – Brad played a founding role this summer in the creation of Rising Tide North America, a decentralized network of groups and individuals organizing against the root causes of climate change.

MEXICO – In January 2006, Brad chronicles the first leg of the Zapatista’s Other Campaign, a national listening tour that travels to the poorest and most exploited communities in Mexico and encourages them to organize “from below and to the left.” In June, striking teachers in the state of Oaxaca spark a popular revolt against an unpopular governor. Sensing the showdown in Oaxaca was heading toward a pivotal moment, Brad returns to southern Mexico at the beginning of October with a video camera in hand.