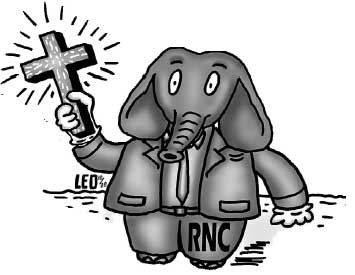 Tempting Faith is the story of a devout Christian who tried to put his ideals into action in the Bush administration’s Office of Faith-Based and Community Initiatives. As disillusioned evangelical voters weigh their allegiance to the Republican Party in this year’s mid-term elections, the book also reads as a parable for what happens to decent people when they go to Washington.

David Kuo, the bass-fishing son of a Chinese immigrant, landed his first major political gig at age 24 as an aide for William Bennett. “I was in awe,” he writes. Anyone familiar with Bennett’s gambling addiction or his vindictive leadership of the “War on Drugs” during the Reagan years would be amazed that Kuo was so enthusiastic about working for him.

There are moving moments in Tempting Faith in which Kuo’s commitment to uplifting the poor is painfully clear, painful because he then goes on to outline how his faith and the faith of those around him were used by the Bush administration for political gain. Kuo is a tragic character: We want him to do the right thing, but he keeps falling in with the wrong crowd. In short, he is naïve, or has at least acted naïvely.

Tapped in 2003 to be deputy director of the Office of Faith-Based Initiatives, he coined the term “Compassion in Action” to describe compassionate conservatism and the thrust of his office. Kuo’s work centered around the Charity Aid, Recovery and Empowerment (CARE) Act, which sought to increase funding for faithbased groups that provide social services. However, as social services are of little interest to Bush’s religious backers, Kuo found only minimal congressional support despite months of pushing for his legislation.

Kuo writes, “A senior leadership staff member was the clearest: ‘Forget about the ‘f*#$ing CARE Act.”

Kuo pressed on and helped organize conferences in key swing districts. The conferences sought to educate small faith-based groups on how to obtain government funding. These conferences had the potential to lure community groups with people-of-color constituencies into the Republican fold and and were supported by Karl Rove, Bush’s top political strategist.

However, funding for these groups dropped to $30 million per year, down from the $200 million promised. Kuo eventually resigned in December 2003 when it dawned on him that the Bush administration was backing these conferences solely for political advantage. Upon his exit, Kuo expressed his viewpoint in a forceful way for the first time:

“I turned in my badge and on my way out did the customary thing by delivering my resignation letter to Andy Card. He accepted it, shook my hand, thanked me for all I’d done, wished me well on my future and health, and asked me if I had any thoughts on how the White House could improve. I had been through too much not to say something… The president had made great promises but they hadn’t been delivered on. Worse than that, the White House hadn’t tried… ‘And finally, sir, this thought. I don’t know if you are aware of this, but your staff frequently refers to faith-based initiative as the ‘f*#$ing faith-based initiative.’ That doesn’t help.”

Nonetheless, Kuo goes on to defend the character of the Machiavellian politicians who bamboozled him. “Did [President Bush] ever care about his antipoverty agenda? Personally, I doubt he could have cared more.” Karl Rove, Kuo says is, “a peerless political operative with a soft heart.”

Despite Kuo’s naïvete, Tempting Faith is intriguing because of its discussion of Christianity as a political tool in the Bush administration, and Kuo’s startling conclusion that religious conservatives need to take a two-year hiatus from politics.