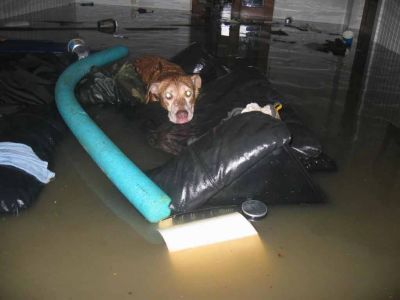 A Corner of Her Eye
A Film By Konrad Aderer
Showing Friday, November 17, at 8pm, ABC No Rio
156 Rivington Street (between Clinton/Suffolk Streets)

Catching it on tape is an American tradition. So is drinking beer when you can’t do anything else. Filmmaker Konrad Aderer and his brothers are stuck inside their dad’s house 22 feet above sea level and about a mile off shore in the eye of the most devastating hurricane in American history. Reality seems too much like a reality show for the first half of the doc, with Cribs kitchen pan-ins on the beer-filled fridge. The brothers provide choice insights on dad’s use of Hurricane Katrina as part of his larger Psyops training program for his sons. Themes such as: Are you going to pussy out, or are you going to take it like man? and “What kind of action does this bitch got,” emerge. Fear comes into the fore as the brothers brace themselves with their weather.com, beers and each other. . . and the kayak.

The footage gets very tense as the camera documents the rapid rise of the water line on the SUV out front. This amazing footage provides a strong narrative structure and is amplified craftfully with background alarm noise and ambient panic.

But like water off a duck’s back, the gravity of the situation doesn’t seem to stick to the brothers in the aftermath of the storm. Nor does it seem to inspire them to go find others who need help. As the water rushes out, the boys fire up the grill and wait out their days of glorious anarchy with guns at the ready. There is a sense of reigning victorious over the flood and celebrating with burgers. No one got hurt, the boys get a natural-disaster badge from dad, and hell, it wasn’t even their house to rebuild. It is only after the shock and giddiness of surviving an ambush has faded that this film brings in the element of reflection.

This documentary starkly and unapologetically exhibits how young, cavalier teenagers react to natural disaster. The filmmaker chose to exclude any characters but his family members, mirroring the isolation they sought during the storm.

Unlike other docs on the aftermath of Katrina, Alderer chose not to blame FEMA or the Bush administration. In fact at one point one of the brothers confesses that if he had listened to the government he wouldn’t be in this mess.

I admire the filmmaker for not trying to reconstruct the weathering of his band of brothers through a martyrizing lens. Instead he shows his family in all of its humbling regularity. It feels tragically common to watch the brothers try to laugh-off their father’s wishes for them to feel as “alive” as he did fighting in Vietnam. The brothers do, at one point, pose with their guns, but these soft city boys continue to seek dad’s approval; gauging their fathers love by the flood lines on the walls of his salvaged home.