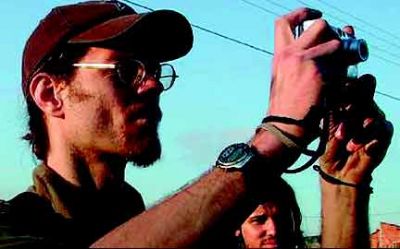 what can you say about this movement – this revolutionary moment – you know it is building, growing, shaping – you can feel it – trying desperately for a direct democracy – in november appo will have a state wide conference for the formation of a state wide assemblea estatal del pueblo de oaxaca (aepo) – now there are 11 of 33 states in mexico that have declared formation of assemblea populares like appo – and on la otra lado in the usa a few – the marines have returned to sea even though the federal police who ravaged atenco remain close by – the new encampment in mexico has begun a hunger strike – the senate can expel URO – whats next nobodies sure – it is a point of light pressed through glass – ready to burn or show the way – it is clear that this is more than a strike, more than expulsion of a governor, more than a blockade, more than a coalition of fragments – it is a genuine peoples revolt – and after decades of pri rule by bribe, fraud, and bullet the people are tired – they call him the tyrant – they talk of destroying this authoritarianism – you cannot mistake the whisper of the lancandon jungle in the streets – in every street corner deciding together to hold – you see it their faces – indigenous, women, children – so brave – watchful at night – proud and resolute

and now alejandro waits in the zocalo – like the others at their plantones – hes waiting for an impasse, a change, an exit, a way forward, a way out, a solution – waiting for the earth to shift and open – waiting for november when he can sit with his loved ones on the day of the dead and share food and drink and a song – waiting for the plaza to turn itself over to him and burst – he will only wait until morning but tonight he is waiting for the governor and his lot to never come back – one more death – one more martyr in a dirty war – one more time to cry and hurt – one more time to know power and its ugly head – one more bullet cracks the night – one more night at the barricades – some keep the fires – others curl up and sleep – but all of them are with him as he rests one last night at his watch.