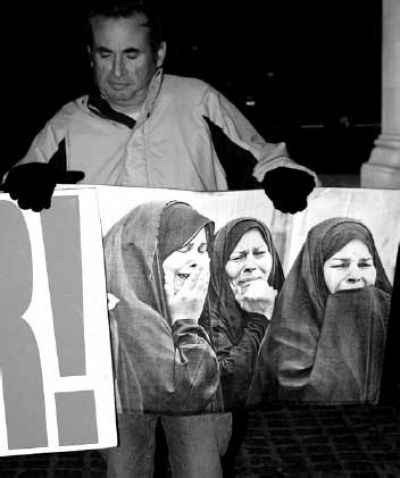 Stretching along the north end of Washington Square Park is the scene of a massive car wreck, part of a set for an upcoming Will Smith film. Standing among the flurry of attention the set has drawn, Jim Klicker and Eleanor Preiss in their designated spot in front of the arch, hold an anti- Iraq war placard, with quiet resolution.

“I’m here to break the silence – to articulate people’s rejection of the war,” Klicker said.

For the past two years, Klicker, 50, a member of the War Resisters League, has held a daily vigil from 5:30 to 6:30pm to protest the ongoing war in Iraq, while a steady stream of passers by stop to stare, sometimes approach him, often continue walking ahead, or on occasion join the vigil.

“I asked what can I do to help and they said ‘here, pick up a sign,’” said Andrew Lewczuk, an 18-year-old student from Pace who joined a Saturday evening vigil.

A few minutes later Alex Ducruet, a 16-year-old high school student walking by in the area joined the group. “I don’t like war. I’m against this,” he said pointing to the large photograph he was holding of a wounded Iraqi.

Klicker, a former software engineer at Coherent Medical Group, is a co-organizer of the Fallujah Witness Vigil that began on Nov. 8, 2004 in response to the intensified attacks on Fallujah while the city was under siege by U.S.-led forces. Message boards circulated on the internet calling to assemble at the park on a nightly basis until the attacks ended. Two years later, Fallujah and the rest of Iraq are still occupied and Klicker remains a daily presence.

“There is no active peace movement, an absence of an open, organized movement. It’s important to be here. I’m middleaged. I don’t look too marginal. I make it seem respectable to be part of a dissidence. People are more likely to be inspired to act,” Klicker said.

From victory signs and thank yous from students, tourists and an occasional veterans to sporadic jeers from passing drivers, Klicker has seen a variety of responses.

During the spring, Klicker was approached, after a prolonged exchange of hard stares and avoidance, by a former sergeant in Iraq who was part of the forward reconnaissance that identified targets to blow up on the field.

“Something happened there and he couldn’t talk about it without choking,” Klicker said. “He suffered from post-traumatic stress disorder. He walked through the streets of Brooklyn because he couldn’t sleep. His vision of the war had completely changed.”

Eleanor Preiss of Brooklyn Parents for Peace has attended the vigil every other night since its onset. “I’m super consistent during the winter and reasonably good during the fall and spring. It seems more important in the winter; it’s more meaningful to be suffering a little in the winter,” Preiss said.

According to a study published on October 11 by public health scientists at Johns Hopkins and the University of Baghdad, more than 600,000 Iraqis (including both civilians and insurgents) have died as a result of the war, which translates to 2.5 percent of the population. This study yielded widely divergent results from the Iraq Body Count, a volunteer- run organization that tallies civilian deaths based on news media sources, which currently numbers civilian deaths at approximately 45,000.

Klicker has no intention of abandoning the vigil until the complete withdrawal of U.S. troops from Iraq.

“This isn’t going to change policy but it affects people’s mentality. I never not wanted to show up. This is a good use of my time – a better use of my time. I like doing it,” Klicker said.