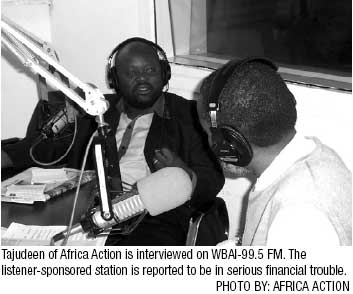 The vitriol spilled in the most recent WBAI Local Station Board (LSB) election campaigns has created one of the nastiest political contests north of New Jersey. But the continuing financial crisis at the venerable radical radio station threatens to overtake the plans of whomever wins the annual vote of the station’s membership.

Founded in New York City in 1960, WBAI’s 50,000-watt signal, found at 99.5 on the FM dial, has a potential audience of more than 20 million people in the tri-state area. In addition to New York, the station’s owner, Pacifica Foundation, operates high-powered FM stations in Berkeley, Los Angeles, Houston, and Washington, DC that can reach approximately 20 percent of the U.S. population, and rely on listener-contributors for the bulk of their funding.

The current elections for the Local Station Board are the latest in the series of political contests that emerged out of the conclusion of a longrunning battle, waged throughout the 1990’s, to reclaim Pacifica Radio stations from a corporatizing leadership. Although hopes were high before the first WBAI experiment in listener democracy, in 2004, several ugly, racially charged elections have soured many former activists and created deep factional disputes at the station.

The disputed financial status of WBAI is only one of many items about which different sides disagree, but it is perhaps the most important current area of conflict. WBAI has perennially teetered on the edge of financial ruin, with accusations of falling listenership and fiscal mismanagement long having been used as weapons in the various factional battles over the station’s direction. The plain, hard numbers, however – obtained from several anonymous LSB members and from public documents – paint a depressing picture.

Carol Spooner, lead plaintiff in the Pacificia Listeners Lawsuit of 1999 and a former member of the Pacifica National Board, recently wrote in an email that “WBAI has been losing listeners and listener support since 2003. It currently cannot pay its bills and also cannot pay its share of Pacifica national programming and administrative expenses.” The station, she concluded, was “functionally bankrupt.”

Spooner’s email was part of a political document written in support of a LSB faction opposed to current WBAI station management, and the details of her message have been hotly disputed by other political elements within WBAI. Nevertheless, a review of WBAI financial statements lends credence to fears that WBAI is sinking under the weight of its expenses and declining listenership.

“Pacifica finances are not exactly clear so its difficult to say what exactly the story is at the station,” independent board member James Ross wryly notes.

Although representatives of the LSB faction more sympathetic to current station management, the Justice and Unity slate, did not return The Indypendent’s calls requesting comment, a Justice and Unity campaign document attributes the accusations of fiscal crisis to “ board members … [attempting] to slash the budget and thus the skeletal paid staff, and attack the staff’s union rights.” Justice and Unity’s campaign literature contends that the current board “raised thousands of dollars for the station, including the funds to launch the WBAI online audio archives, and recruited many new listeners and paid members through outreach at community events.”

Nevertheless, numbers obtained from current WBAI board members document a decline in listener membership. After peaking in the Fall of 2005, membership at WBAI has declined steadily until, in October, it stood at 16,600 members (an 11 percent decline from Fall 2004 and a 20 percent drop from fall 2005).

Coinciding with this membership decrease, the number of days spent fundraising at WBAI have steadily grown, from 72 in fiscal year 2002 to 93 in FY 2006 (a growth of 25 percent). At the same time, the average pledge income per day has plummeted, from $33,806 per day in 2002 to $25,350 in 2006. WBAI’s total days of on-air fundraising stand at double those of most other Pacifica radio stations – KPFT in Houston spends 52 days a year in pledge mode, while KPFA fundraises for 59 days.

We need to “examine our fundraising performance over the past few years and see what we’re doing well and what we’re not,” concludes Ross. “We have to come to an understanding of what we can get from our listeners in a year. We can’t keep relying on 90-plus days of funding. We need to spend less money, at least in the short-term.”