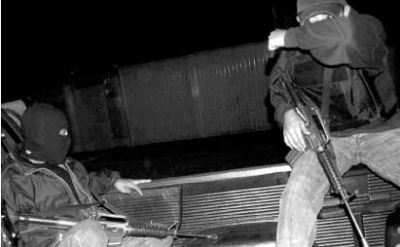 John Gibler began covering massive anti-government protests in the impoverished Mexican state of Oaxaca earlier this summer. As the movement grew, paramilitary death squads linked to embattled Gov. Ulisses Ruiz Ortiz began “softening up” protester barricades with the kind of hit-and-run attacks that would later claim the life of NYC Indymedia journalist Brad Will. In an eerily prophetic dispatch submitted to The Indypendent one day before Will’s murder, Gibler recounts an earlier experience he had with the perils and uncertainty of trying to cover the violent no-man’s land that Oaxaca’s capitol city had become.

OAXACA DE JUAREZ, MEXICO—On Aug. 22, I came to the Fiesta Inn on the outskirts of Oaxaca on to catch a ride with the national press corps as they wound about the city looking for the death squads. The national reporters from Mexico City were all staying here as well as a local reporter with connections to the police chief.

These reporters knew the scene. They have the cars, and they have the serious cameras. At night my little camera is useless. The local reporter sitting next to me was working for a young hotshot journalist from one of the main national newspapers in Mexico City. This reporter, call him Rodrigo, went upstairs to his room to charge his cell phone and left me and the local correspondent, call him Andres, at the restaurant with an open tab. Andres refused to eat – he was on the receiving end of a club recently and had the taste of pain still on his tongue. He couldn’t sit still, couldn’t settle his gaze for more than a moment. He was smoking. He looked constantly up to the screen, around the room, out to the doors. He held two cellular phones, one in each hand. He knew what was going to happen; they told him.

Oaxaca had been in the grip of a bizarre, unarmed uprising for over 100 days. It started as an annual teachers’ strike demanding better wages and higher budget allotments for school repairs and student meals. Section 22 of the National Union of Education Workers has been symbolically occupying the historic town square every year since 1980 in their struggle to bring greater federal and state funds to meet the education needs of one of the poorest states in the country. On June 14, for the first time in the 26-year history of the teacher’s movement, recently elected (or imposed, depending upon whom you ask) Governor Ulises Ruiz Ortiz of the Institutional Revolutionary Party (PRI) sent over 1,000 state police to lift the teachers’ improvised tent city. The police stormed the sleeping teachers at 4 a.m., shooting tear gas grenades from helicopters and brutally beating men, women, and children with their truncheons. The police, however, did not do their math: the teachers’ union has 70,000 members, some 30,000 of whom were in Oaxaca for the protests. Within hours of the raid teachers and outraged local citizens took to the streets to defend those camped out in the town square. By midday they evicted the police with rocks, sticks, and Molotov cocktails. Since that day, not a single uniformed police officer had set foot in downtown Oaxaca City.

Throughout the rest of June and July the teachers – joined by hundreds of regional and statewide social justice organizations all grouped together in the Oaxaca People’s Assembly, or APPO – waged an increasingly intense campaign of mass, coordinated civil disobedience aimed at paralyzing the state government and forcing the resignation of Ruiz Ortiz. They cancelled the state’s largest tourism event, the Guelaguetza, blockaded all major state government buildings, including the capitol, forced Ruiz Ortiz and other state officials underground, and took over the state television and radio station. The state government made no appearance, though thugs and gunmen began to pick movement leaders off the street and cart them off to prison and showed up at protests, first shooting into the air, and later into the crowds.

During the predawn hours of Aug. 22, a convoy of over 40 cars and trucks filled with both uniformed police and gunmen clad in black fatigues and ski masks, all brandishing pistols and AR-15 machine guns, cruised through Oaxaca de Juarez as part of the Governor’s officially dubbed “Operation Clean-up.” As they pulled off towards their first target – a local radio station occupied by protesters – gunmen in the last few trucks of the convoy shot at two newspaper photographers who had been taking pictures of the caravan. They missed, by inches. A few blocks away, they opened fire on protesters and killed one man, Lorenzo San Pablo Cervantes, a 52-year-old architect who had recently joined the protests helping to guard the radio stations. A cameraman with an international press agency told me: “On Monday I felt like I was in Africa or Haiti in drive-by shootings. It was fucking awesome.”

Earlier in the night, at 7:30 p.m., the restaurants and sidewalk cafes on the town square had begun to gather up their outdoor tables and draw metal doors down over their windows. “The police told us to close early, that they were going to come tonight,” one café manager told me.

He balked. “They called someone, everybody is closing. It is going to get dangerous.”

I saw Rodrigo and Andres at a café several blocks from the town square at around 9:30 p.m. They told me: it is coming. Tonight. Andres had been on the phone with the police chief. I sat down. Andres got a call for a lastminute press conference at the headquarters of the teachers’ union and we left Rodrigo typing his story to see what it was about.

The rumors had already run through most of downtown. The colonial cobblestone streets were empty, the bars and restaurants all closed, and the only light came from the burning tires in the center of each intersection where the men, and a few women, with their long shadows guarded makeshift barricades assembled from scraps of sheet metal, stone, and wood. Every sound seemed suspect. The hard gunning of a motor. A sudden wave of barking dogs. Every sound, for a moment before its logic could be understood, seemed to signal imminent violence. Molotov cocktails, rocks, plastic water bottles filled with gasoline, and piles of tires were stockpiled on the sidewalk.

“Don’t you feel scared?” Andres asked me out of the blue as we walked down the street. I had heard rumors early on that Andres had connections with the police and thus never spent much time around him. He is a gregarious fellow, chummy and always cracking jokes, but I could not shake the distrust. A few weeks before, when protesters apprehended two plainclothes police officers that had threatened the family of one of the APPO leaders, Andres arrived on the scene asking questions without presenting his press credentials. Someone shouted: “he’s a cop!” Andres got scared and ran. One protester then clocked him on the back of the head with a club. Andres fell; people from the crowd kicked him repeatedly until someone stepped forward to call them back. Andres was taken to the hospital and released later that day. The APPO issued a formal apology, but apologies do little to uproot such a thrashing.

“No,” I said. “Perhaps luckily, or perhaps stupidly, I don’t feel scared.” Though I did feel somewhat ridiculous telling a man who had recently been beaten down by a mob that I didn’t feel afraid.

“Not me,” Andres said. “I don’t want to get into this stuff anymore.”

At the press conference we heard testimony from two teachers who suffered second-degree burns the night before when the police convoy pulled up alongside their car and tossed a Molotov cocktail in the front window. The man in the passenger seat immediately opened his door and rolled out into the street to escape the flames. He had little skin left on his forehead and yet there he was in front of the local and national press denouncing what happened to him the night before.

We walked back to the café, now closing, and then headed off to the Fiesta Inn.

Andres had just hung up the phone moments before. Tonight the convoy would strike. He wanted to stay indoors, to stay away. They told him: don’t go out, there will be no holding back tonight and press badges won’t keep you safe. But Rodrigo wanted to see for himself what would happen. Rodrigo had been playing Andres’s police connections precisely so he could be at the right intersection at the right time and watch what went down. I was a parasite on this operation, sitting there waiting. I too was under the spell of wanting to be where no one should want to be.

As I saw it, the smackdown would happen whether I witnessed it or not, but if I witnessed it then I could write about it with some authority. There was no need to worry about tipping off the protesters; they already knew and will have organized barricades across the city to stop the convoy, with hundreds of barricades interrupting intersections, guards waiting in the shadows with gasoline, Molotov cocktails and clubs. We too were waiting, in a bright hotel restaurant, now looking up to the 11 o’clock news. Ivan Saldaña, the Televisa reporter who would give the report, was standing by a tree in the parking lot just beyond the front doors of the Fiesta Inn. Andres and I were at a table overlooking the empty lobby. We ordered nothing.

The news came on and we stood without a word and walked right under the television screen, looking up as if to a UFO arrival, necks cranked, eyes unblinking. Saldaña described the mood on the street and then cut to the report he put together on the events of the previous night.

The images were damning: this was a death squad. And these were the people who would come that night. But tonight, Andres has been told, there will be no holding back.

The news report finished and we returned to the table. I looked to Andres: “That was intense. I can’t believe they showed that on national television. This will be very damning for the Governor if the police carry out a major raid tonight.” Andres nodded, lit a cigarette, and then dialed a number on the cellular phone in his right hand. He called the chief. He mumbled, asked again, verified, and hung up. I did not understand a word. He looked at me: “They cancelled it; they aborted the operation.”

“That’s what he said. They cancelled it.”

Andres called the waiter over and ordered a steak.

Later, when I saw Saldaña, I pat him on the back and said: “Hey, good report. I think you might have saved a few lives tonight.”