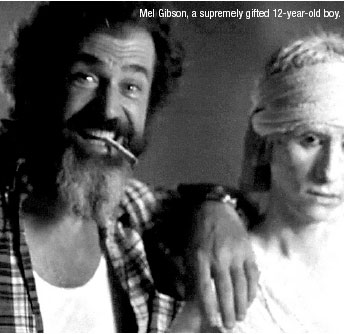 Mel Gibsons’s Apocalypto is the work of a supremely gifted 12-year-old boy. This fact is evident from the film’s opening scenes which detail, in turn: the gory hunting of a tapir, a tapir-testicle-eating prank, and another prank involving crotchburning herbs (not to mention that ridiculous title – a lost rap-metal album from 2002?) Clearly, the world’s most notorious drunken anti-semite has yet to outgrow the emotional immaturity which has long been a part of his public persona. Ostensibly Gibson’s take on the fall of the Mayan civilization, which peaked in what is now Mexico and Central America 1,200 years ago, Apocalypto wants to be both a kick-ass action adventure film and a deadly serious parallel to our own civilization’s hedonistic decline. The only problem with this is that poor Mel possesses neither the strengths as a filmmaker nor the morally complex world view it takes to pull these contradictory impulses together.

Fleshing out his characters may have helped this, but having tethered his film to an unknown world, Gibson can only manage a handful of universal traits: strength, nobility, chivalry and, naturally, vengeance. Following the prank scenes, a vague but peaceful Mayan village is overrun by marauding “more civilized” Maya who slaughter, rape and pillage like they’re in a Mel Gibson movie. Our barelyintroduced hero Jaguar Paw (Rudy Youngblood) lowers his pregnant wife and toddler son into a hiding pit and then watches as his father sacrifices himself to save him. As the rage grows inside, Jaguar Paw marches off to a sacrificial temple, where his friends are all beheaded or speared, before he escapes and sprints home for the remainder of the film with vicious men in hot pursuit.

To give Gibson his due, everything from the sets to the photography to the costumes to the faces of the extras looks astounding. The escape with subsequent chase sequence, lasting half the film, is genuinely gripping, edge-of-yourseat suspense filmmaking. It’s all brilliantly shot and cut, but blunt and meaningless: Men rip out still-beating hearts, women give birth standing up, toddlers never cry out in pain, and the hero is endlessly speared until you’re either vomiting or giggling at the twisted absurdity of it all.

Thus, at best, the film comes across as a tense, efficient, detailed chase film made by a callous moron with nothing to say about world history, political upheaval or ancient cultures, beyond this: Humans are barbaric. Well, thanks for that, Professor Gibson, but aren’t there any rituals worth depicting besides celebratory beheadings? Evidently not for a man whose taste for bloodshed could not even be satiated by flogging the bejesus out of Jesus for two hours in his last film. Indeed, it seems that Gibson’s decision to make a film about the Maya was just an excuse to dive deeper into his obsession with extreme violence – to recreate scenes of truly despicable barbarism. To wit: Only in a Gibson film would we see someone not just receive a jaguar to the face, but also watch as said jaguar bites off the guy’s mouth. Thank god there weren’t any Jews around…