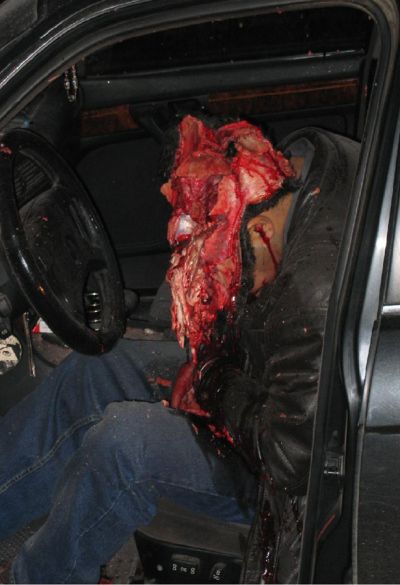 PEACE ON EARTH: The website www.nowthatsfuckedup.com displayed graphic Iraq War photos such as the one above. This is a photo of an Iraqi man killed by American soldier for failing to stop in time at a roadblock. Soldiers in Iraq caused a quiet controversy recently when an underground economy of war photos were being traded for pornography online.
PHOTOSFROMIRAQ.REVOLUTIONWEB.ORG
The end of the year means the release of serious films jockeying for Oscar contention. This year, violence and gore play the leading roles in many heavyweights: Apocalypto, Blood Diamond, The Departed and Flags of Our Fathers.

These movies excel in make-believe violence that keeps getting more graphic and extreme over time. Hollywood is forever chasing realism even though we see the movies to escape. No matter how real the bloodletting – the screams of anguish, the reverberations of explosions – we know it’s staged.

Yet we block out the real violence in front of us. Even as the Iraq War dominates the news month after month, we have insulated ourselves from it.

Recently, Bob Herbert commented on this in the New York Times. He noted that the media images the day after Thanksgiving were of more than 200 Iraqis massacred by car bombs in Sadr City the previous day juxtaposed with “holiday shopping zealots… storming the department store barricades.”

We don’t want to know what the war looks like. That’s why, when I heard about nowthatsfuckedup.com last year, I had to see it. Part of it was voyeurism, but I also wanted to see the sordidness of the Iraq War, the military and America all at once: soldiers trading pictures of war gore for access to amateur pornography.

More than that, I simply wanted to see what the war looked like. I’ve been writing about the Iraq War for four years running. I’ve read well over 30,000 articles about Iraq in that time, but the war still seemed distant and antiseptic. I wasn’t disappointed.

The website contained hundreds of photos of indescribable mayhem. We’ve all seen photos of cars and buses turned into twisted, smoldering hulks. But instead of steel, imagine the impact on flesh and bone.

It’s not the tidy Hollywood aesthetic, a shot in the forehead leaving a small hole and a trickle of blood. Things explode. Heads are turned inside out like a flower in full bloom, but little is identifiable. Bodies are charred, pulverized, shredded and rent asunder.

In perhaps the most disturbing picture, a bowl holds flesh and blood. A head becomes recognizable but all the features are distorted and mutilated. It dawns on you that the head must be missing the skull, collapsed like a mask in oozing fluids. The photograph is a contradiction: you understand the incomprehensibility of war. What type of violence could leave the hair on a man’s head while blowing out his brains and skull?

The name of the website, shut down because it violated “obscenity” laws in Florida (and the webmaster was briefly arrested), makes sense. The juvenile male giddiness, “Now THAT’S Fucked Up!”, a jangly response in extremis.

The soldiers were admonished for bad taste. The Pentagon’s only concern was to caution troops not to publish pictures that might reveal military vulnerabilities. Ditto for the torture shots. War enthusiasts dismissed them as sophomoric hi-jinks or attacked the media for publishing images that serve as a recruiting tool for the enemy.

A few years ago I stumbled across a site called “terroristmedia.com.” It sounds like a joke, but in fact links to hundreds of resistance videos from Iraq, many shaky and of poor quality. But they show military operations with horrific consequences for U.S. troops caught unwittingly on camera. Some videos linger over dead Americans and captured war booty.

For the guerrillas, it’s proof of their skill, even righteousness, and shows their enemy as vulnerable. It took the media more than three years to start airing these readily available videos, most notably when CNN recently showed excerpts from the sniper videos.

Many Americans were livid that it would broadcast “enemy propaganda.” They didn’t want to see what the war looked like. They crave the illusion of a noble war where Iraqis die only at the hands of terrorists and American dead are seen only gift-wrapped in flag-draped coffins, if at all.

It’s there to see, but that’s the problem: You have to want to see it, evidence of concern or sadism. A few seconds is all it takes to Google graphic war videos and pictures. Many sites now offer DVD compilations for sale, the perfect stocking stuffer.

The proliferation says a lot about the heart of darkness. New media is always exploited for sex and violence. Vietnam was the first television war. The Gulf War was the first videogame war, and the Iraq War is the first Internet war.

The combination of digital media technology and the web made the flood of unfiltered gore and sadism inevitable. What we see is a trickle. Many soldiers bring back these visual mementos. It’s proof of their prowess in combat and an indifference to human life.

If so many soldiers are bringing back virtual souvenirs how many are bringing back war trophies made of flesh and bone? We can dismiss it as savage and primitive, scalps and shrunken heads, but desecrating war dead surely continues today as it has for millennia.

During the Vietnam War many American soldiers collected ears, scalps, gold teeth and hands. A Pulitzer-prize winning investigation by the Toledo Blade three years ago revealed the barbarism practiced by an elite unit known as Tiger Force during a seven-month period in 1967.

Sgt. Larry J. Cottingham told Army investigators about collecting body parts: “There was a period when just about everyone had a necklace of ears but as the men were wounded they thought it was bad luck and got rid of them. Scalps were a kick for a time also but there were lice in the hair and they got rid of those too and it didn’t last long.”

This was a feature of the “Good War.” The desecration went far beyond lampshades of skin and soap from human fat. The primal slugfest between the Japanese and Americans was one of unrelenting brutality. E.B. Sledge describes in his memoirs, With the Old Breed at Peleliu and Okinawa, Americans urinating in the mouths of corpses, extracting gold teeth from soldiers still alive and displaying cut-off hands as trophies.

A war correspondent for the Atlantic Monthly wrote of how troops “boiled flesh off enemy skulls to make table ornaments for sweethearts, or carved their bones into letter openers.” The media are loath to show this; it mars the notion that an oasis of heroic nobility remains in the landscape of horrors. And it is incapable of recreating the stench, filth, disease, rotting corpses, insanity and paralyzing fear of the battlefield. But what it can do is show war unvarnished. If we saw the obscenities of real war on a regular basis there would be little stomach for it. We couldn’t exit the cinematic black box and let the sunlight wash away the images. We might be shocked out of our rollicking consumer orgy.