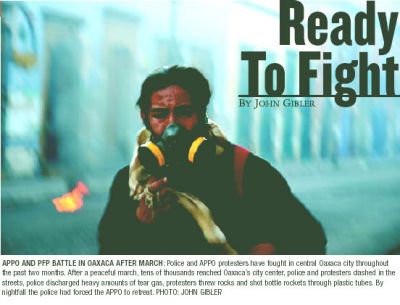 On Dec. 1 one president – appointed by a stacked electoral tribunal – slipped into the Mexican Congress through the back door for a four-minute inauguration ceremony held on a dais occupied by the conservative National Action Party (PAN) and suited Secret Service agents, while a second president – self-appointed in a massive rally in Mexico City – led a tame protest march to a prepackaged stage and sound system waiting in front of the police barricade half a mile away from the march’s proclaimed destination.

Both in congress and on the streets, December 1 was a show. The two strongest electoral forces in the country, the PAN and the Party of the Democratic Revolution (PRD), fought for the image of legitimacy. Both lost. The former dinosaur of Mexican political power, the Institutional Revolutionary Party (PRI), didn’t even try; the PRI was nowhere to be seen on Dec. 1.

Behind the parties, two men sought to appeal to the masses watching through the lenses of Televisa and TV Azteca, Mexico’s national television networks.

President Felipe Calderon stood amongst his huddle of senators and bodyguards to receive the presidential sash with an unpracticed stone face fit for a junior high yearbook. Off camera, Secret Service agents held PRD senators against the wall. Arnold Schwarzenegger, guest of Calderon and decoy used to divert press attention from the PRD protests inside the chambers, commented to Ioan Grillo from the Associated Press that the scene had “good action.”

Out in the streets, the “legitimate president,” as supporters now call him, Andres Manuel Lopez Obrador shouted, waved his arms, and pointed his finger with the uncertain fury of someone trapped in perpetual candidacy. His large – though smaller than usual – crowd of supporters hung on his every word and obeyed his every command. “I don’t want one wall painted on, nor one window broken,” he told the crowd before the march, “I want everything in order.” The crowd obeyed, engaging a wellbehaved march and rally that did not get within sight of its goal: Calderon’s gathering with foreign dignitaries in the National Auditorium.

The parties concluded both ceremonies and protests before lunchtime.

Mexico’s brief experiment with electoral legitimacy ended on Dec. 1, six years after President Vicente Fox’s inauguration interrupted 71 years of continuous PRI rule. Felipe Calderon stepped into the presidency – guarded and through the backdoor – with the weakest mandate in history. Even according to the discredited official results, Calderon won by half a percentage point. Lopez Obrador turned a massive movement organized to protest the vote-count irregularities into a political charade after the electoral tribunal denied his recount demand, corralling hundreds of thousands of supporters into Mexico City’s Plaza de la Constitución, or Zócalo, only to have them raise their hands in support of his proposed “legitimate government.”

But just as Mexico’s system of electoral representation eroded into a stage act with two presidents and a congress engaged in shoving matches and fist fights, the country’s grassroots social movements stepped in to fill the vacuum of legitimacy, carrying out in 2006 some of the most ambitious and creative acts of resistance in Mexican history.

The Zapatista Army of National Liberation began the year launching its Other Campaign, a national listening tour to gather voices and stories of resistance and autonomy from the forgotten corners of the country, and thus set in motion a process of joining anti-capitalist left movements into a national organization, a coming together that does not flatten the rich diversity of the left or subordinate any one organization or cause to another. As usual, the idea behind the Zapatista initiative – uprooting capitalism and the political class that sustains it – was quixotic and highly energizing, pulling tens of thousands of people to participate in the town hall meetings across the country.

The Oaxaca state local of the National Union of Education Workers, known as Section 22, was next to rise up. On May 22, the union went on strike – something it does every year – to demand better pay and a higher budget for state schools. This year, however, PRI governor Ulises Ruiz Ortiz sent thousands of state riot police in at dawn on June 14 to break the teachers’ protest camp, sparking a popular uprising that would defeat the state police forces and use coordinated civil disobedience actions to seize the state government and seek the governor’s ouster. The teachers’ union convoked the Oaxaca People’s Popular Assembly (APPO), through which Oaxaca’s historically divided left joined and organized its civil disobedience uprising.

State and federal authorities unleashed brutal acts of repression against both of these movements. On May 3 and 4, police from Mexico State first ambushed a small march of flower vendors in Texcoco, then battled with protesters from neighboring San Salvador Atenco on the highway, and finally joined with thousands of federal police to raid Atenco, brutally clubbing hundreds of people, raping and molesting 45 women, and destroying homes in a targeted act to break one of the most organized members of the Other Campaign, the Atenco’s People’s Front for Land Defense.

In Oaxaca, state police organized paramilitary attack units and death squads to kill protesters. On Oct. 27, after paramilitaries shot and killed New York Indymedia journalist Brad Will as he filmed the paramilitary attack on a protest barricade, President Vicente Fox, in one of his last acts in office, sent the Federal Preventive Police (PFP) to Oaxaca to quell the protests. With the cover of the PFP, the state police ramped up their attacks, detaining and torturing protesters across the city and fueling the rage that would lead the protesters to battle with the PFP in the streets and finally, on Nov. 25, fall to the trap of an open battle in the narrow streets of Oaxaca City’s historic center. The PFP used tear gas grenades, anti-riot tanks and live fire to push the protesters back into an open avenue and then surround, beat and arrest at least 150 people.

The state repression, popular uprisings and continued decay of institutional legitimacy will most likely dominate the coming years in Mexico. Calderon will most likely do little to battle entrenched corruption, while pushing hard to expand the reach of cartel market economics and slamming down the full force of the state against those who stand up in opposition.

Calderon’s first acts in office show an adept public relations campaign coupled with the drive to crush serious resistance movements. During his first week in office, Calderon cut his and his cabinet’s salary by ten percent, said he would raise the army’s salary (he did not say by how much), set up a project to install basic services in Mexico’s 100 poorest towns, grabbed Flavio Sosa (one of the APPO’s most public figures) and three other APPO organizers as they were preparing to hold talks with Calderon’s minister of the interior and sent hundreds of federal police to round up all the guns at the Oaxaca state police headquarters, supposedly to analyze whether or not they have been used in paramilitary activity.

How the resistance movements will respond to Calderon’s heavyhanded style remains to be seen. Will they break out of the model of compliant defiance, of holding endless marches and rallies, to carry out more high-stakes civil disobedience actions such as taking over government buildings and media outlets? Will they expand the vocabulary of non-violent resistance with new unthought-of acts of rebellion?

The APPO called for a march to protest the arbitrary detentions of its members and continue the push to force Ulises Ruiz’s removal from office. The Other Campaign is in the process of conducting a national referendum on the next phase of organizing and preparing a gathering with representatives from international left movements in Chiapas from Dec. 30 to Jan. 2.

After a year of traveling across the country, viewing and listening to those who came to participate in the Other Campaign, those who filled Lopez Obrador’s protests against electoral fraud and those who took to the streets in the unarmed uprising in Oaxaca, one thing seems very clear: The underdogs of the Mexican left are standing up and getting ready to fight.