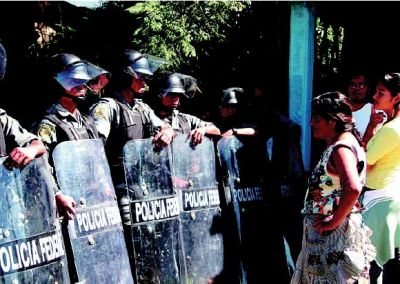 OCT. 29: “I am not from any political party, only from the party of the
oppressed,” said a women identifying herself as Paz, a 48-year-old preschool teacher who stood in the line of women. “And when you have conviction, you won’t be scared by police batons.”

OAXACA—Federal police are continuing to carry out house raids and use violence and other intimidation tactics against members of the Popular Assembly of the Peoples of Oaxaca (APPO) in an effort to crush the ongoing popular uprising against Oaxaca’s governor, Ulises Ruiz Ortiz.

“To belong to an organization or simply to think differently than the government now means that you are committing a crime,” said recent state university graduate María, whose name had to be changed in order to protect her identity. She said that many members of her family are now in hiding because they participated in the popular movement to protest the level of corruption and lack of transparency that has been the hallmark of Governor Ruiz’s government. “They (the protesters) haven’t killed anyone, they haven’t burned down buildings, they haven’t robbed, they have simply protested.”

Following APPO’s seventh “megamarch” on Nov. 25, federal police detained a total of 142 people, 107 men and 35 women including three juveniles. According to the Mexican League in Defense of Human Rights, the arrests were carried out violently and many suffered torture while detained in local prisons. On Nov. 27, the 142 prisoners were taken to an all-male medium security prison in the northern Mexican state of Nayarit. They were taken outside the state supposedly due to their profile as “extremely dangerous.”

The federal troops used the large march and the resulting street fight as the pretext to implement a zero tolerance policy against the movement in order to restore order at all costs before Dec. 1 when Mexico’s new president Felipe Calderon was sworn into office, amidst accusations of electoral fraud. The inauguration did not end the state-sponsored violence.

The following week, federal police continued house raids. Arrest warrants were issued for all members of the General Council of the APPO. Meanwhile, various local and state police departments roamed the city in heavily armed squadrons of plainclothed officers in un-marked trucks without license plates.

The fear and paranoia have heightened to such an extent that the APPO leadership and many people who had peacefully participated in the popular movement have fled the city in fear of being jailed, disappeared, tortured or killed.

María said that a cousin and her boyfriend participated in the occupation of University Radio – the movement’s medium of communication – until they were informed that their names were included on the list compiled by the government. Under the cover of darkness on Nov. 25, María said members of her family pulled up in a car in the back of the university and quickly escorted the demonstrators outside of the city. Upon arriving at her boyfriend’s house in the Isthmus of Tehuantepec, a long drive of approximately eight hours, they found the house burnt to the ground. Other members of her family are now in hiding.

So few people remained in the barricade to protect University Radio that the station was eventually turned over to the federal forces. The Oaxacan governor announced that no amnesty would be granted for anyone involved in the conflict.

Broadcasters on the pro-government Citizen Radio called for the lynching of anyone involved in the popular movement. Listeners called the station to help identify their neighbors who participated in barricades and marches.

The climate of fear and repression intensified as police began to target teachers and search for them in their schools while classes were in session. Armed paramilitaries kidnapped at least one university student at gunpoint in front of the College of Medicine.

María said her uncle, a teacher in the Section 22 of the National Union of Education Workers and supporter of APPO, was recently pursued while leaving school by two trucks of presumably armed plainclothes police officers. Upon leaving the school, a fellow co-worker called him on his cellular phone to alert him to the people pursuing him. The teacher accelerated and made a u-turn in an attempt to escape, but the two trucks did the same in order to follow him. He quickly returned to the safety of the school and later hid himself in a friend’s car in order to escape. Currently he is in hiding in an undisclosed location within the state of Oaxaca.

Another of María’s cousins, a recent graduate from the state university’s medical school, gave medical attention to protesters when the federal police occupied the city. Simply driving an ambulance and aiding the injured was seemingly reason enough for her to be harassed by the government. According to María, her cousins are being pursued by local police and thugs allied with the state government.

While the persecution against the popular movement in Oaxaca continues, the APPO has reiterated its demand for the destitution of Governor Ruiz and the withdrawal of federal troops from the sovereign state of Oaxaca. They claim that although badly beaten, the movement has not ceased to exist in the seven regions of the state and are calling for local, national and international mobilizations in solidarity with the movement.

The repression, which many believe amounts to state terrorism, has had chilling effects on families and communities as political divisions and the fear of reprisals has pushed people to run for their lives. “After seeing what the government has done to other (detained) people for simply speaking out, how they have had their fingers mutilated, been beaten, been tortured as much physically as mentally, and imprisoned, I don’t want to see this happen to my family,” María said. “At stake is not simply their liberty,” she explained, “but their lives as well.”