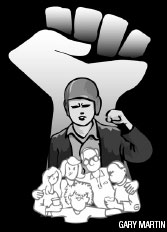 The approach of the American power structure to the history of popular struggle is simple: if they can’t bury it, they tame it.

Yet despite this whitewash, there has been a resurgence of interest in the Weather Underground – the clandestine organization that bombed the symbols of American imperialism in the 1970s. There have been academic histories, memoirs and even a documentary that found success on the arthouse circuit. Outlaws of America, a book by Dan Berger, is the best of the lot. Berger provides a sympathetic but critical account, chronicling the stumbling attempts by white, middle-class kids to forge a revolutionary organization within “the heart of Babylon” that operated in solidarity with the damned of the earth.

The Weather Underground formed as a faction within Student for a Democratic Society (SDS) – the largest student left organization in American history – as it headed towards meltdown. They opposed the efforts of the Progressive Labor Party (PLP) to take over SDS, championing the revolutionary potential of the youth counterculture and the black liberation movement. After SDS’s collapse, the Weather Underground turned to militant tactics and armed struggle as an underground organization.

One of the strengths of Berger’s book is that he puts the actions of the Weather Underground in historical context of state repression and revolutionary ferment rather than judging them with the benefit of hindsight, but this is also one of its weaknesses. He brings out their impressive commitment to solidarity with those caught on the wrong side of imperialism and their unwavering dedication to anti-racism. But while he rakes the group over the coals for their failures to meet their own ideals from opposing sexism within the organization to their later turn to the reductive class analysis they originally opposed, Berger fails to critique them for their effects on the mass movement.

It would be unfair to blame all or even most of this decline on the Weather Underground. Police violence, infiltration and harassment played a far more prominent role. Yet it remains true that, in large part, the crisis of the mass movement was one of leadership and strategy: how do you continue to escalate after mass protests have proven unable to get the goods and stop the war? The Weather Underground’s proposed solution drew on faulty analogies to the Cuban revolution. Hundreds of the most committed and experienced leaders from the student movement withdrew themselves from the mass movement to go underground, leaving it in the hands of the liberals and dogmatic Marxists they had opposed. It is unsure whether an anti-imperialist movement capable of contesting power could have been built in the 1970s – though anti-imperialist politics certainly have far more of a resonance with American political traditions and culture than Marxism- Leninism – but by abandoning mass organizing, the Weather Underground ensured that one was not.