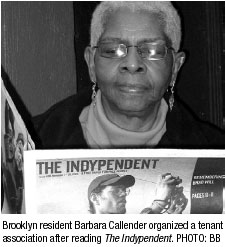 It pays to read The Indypendent – just ask beleaguered Brooklyn tenants fighting mass eviction and the “demolition” of their affordable homes. This past summer, Brooklyn Heights tenant Barbara Callender read a syndicated version of The Tenants’ Voice about phony demolitions, in Tenant/Inquilino, the paper of Met Council on Housing, a city-wide tenant union. The column explained how landlords are increasingly using a loophole in the rent laws to do gut renovations and call them demolitions – allowing the eviction of tenants and de-regulation of affordable apartments.

Once tenants have been evicted from a building, its value skyrockets. Developers are free to remodel apartments and jack up the rents. Phony demolitions are a bureaucratic backdoor to evicting tenants and raising rents. In the past, a demolition meant razing a building. Phony demolitions often leave roofs, walls and even entire floors intact.

The Penson Companies bought Callender’s building along with four other buildings in Park Slope and Brooklyn Heights for $7.9 million dollars. Months later the company applied to the state housing agency, the Division of Housing and Community Renewal (DHCR) to demolish the three buildings on State Street in Brooklyn Heights and the two in Park Slope. Under Gov. Pataki the DHCR has been prolandlord through changing the rent laws and many landlords are taking note; these buildings are the first phony demolition cases in Brooklyn. “I read the demolition papers late at night and I thought, oh my God the landlord is going to get us out of here,” Callender said. “The very next morning I called Met Council.”

Callender and her dozen or so neighbors formed a tenants’ association and devised a strategy. They found a curious name on the mortgage of their buildings and some of the demolition applications – Frank A. Farricker. Farricker, a vice president in the company, lost a bid for Connecticut State Senate in tony Greenwich, CT. He ran as a Democrat who advocated for affordable housing, but what Farricker said in Connecticut was different from his actions in Brooklyn. Numerous newspapers including the New York Times picked up the story and the candidate and his company felt the heat.

“Are we going to turn it into luxury housing? Of course it’s going to be luxury housing. The inference that my company is going to go in with lawyers and tough guys and tell them they have to get out is untrue,” Farricker said in the Greenwich Time.

The heat got so hot that Farricker had to leave the kitchen. Farricker lost the election by a six to four margin and claims he lost his job at the Penson Companies because of the negative press. But the Penson Company isn’t stopping. It filed demolition applications with a sixth Brooklyn building and sent letters to tenants asserting their right to evict and demolish. The Brooklyn tenants, however, are not rolling over. Their newly-formed tenants’ association goes before the community board later this month and elected officials have written letters of support.