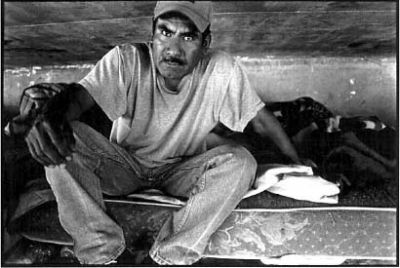 Overcoming the navel-gazing dorkiness too often associated with their respective genres, the best sci-fi and fantasy films successfully tackle universal themes while simultaneously addressing contemporary issues. These films take the shape of imaginative parables, offering instructive lessons on the eternal here and now without slipping into didacticism. The end of 2006 produced two stellar new films in this tradition: Guillermo Del Toro’s horror-fantasy Pan’s Labyrinth and Alfonso Cuaron’s scifi thriller Children of Men. Shining through layers of dirt and blood with an all-too-relevant urgency, these visceral, brutal, gorgeous movies are not only two of the best films of 2006, but perhaps also the year’s most forcefully eloquent examples of politically engaged filmmaking.

It’s no accident that these exceedingly talented directors both made films this year set in not-too-distant eras of fascist rule. The post-WWII Franco-run Spain of Pan’s Labyrinth shows a village dominated by a general who slaughters innocent peasants in the name of suppressing insurgency. Children of Men’s Britain circa 2027 takes “homeland security” to its horrifyingly logical extreme, openly labeling its internment camps for immigrants with this tag. More concretely, both films depict worlds caught up in violent turmoil and revolt that’s made all the more palpable through each director’s tactile sense of pain. These movies bruise their audiences in the best possible way.

Del Toro’s film blends its two worlds of fantasy and reality so that they intersect and continually inform one another as the film progresses. While tending to her ill, pregnant mother amidst a violent conflict between local rebels and Franco’s army, young, book-obsessed Ofelia (Ivana Baquero) follows a peculiar dragonfly into a fantasy world where she meets an elaborately detailed faun, who in turn assigns her a series of tasks to assure her immortality as a princess. As Ofelia’s tasks become increasingly perilous, the dangers of the real world become even greater, with her murderous evil stepfather commanding the local doctor to sacrifice her mother to save his unborn child. All the while, said stepfather commands his troops to hunt down the rebels while he sadistically tortures those captured.

Far from the escapist realm it might appear to be at first, Ofelia’s fantasy world is filled with nightmarish images that echo those occurring in her village. It’s a credit to Del Toro that he never softens his story for a moment – both worlds are filthy, gory, harsh places, albeit beautifully rendered. Most importantly, the senseless murder and unspeakable violence that bridge them are keenly felt through the director’s evocative, unblinking stare. Unlike in Apocalypto or many recent horror films, death in Pan’s Labyrinth has an unmistakable impact.

This tendency to not look away from genuine horror carries into Cuaron’s film (he’s also a producer on Del Toro’s). But the horror on display in Children of Men proves even more upsetting than that of Pan’s Labyrinth, because it’s far too familiar. The world of 2027, or, as we see in an early news broadcast showing all other major cities aflame, the London that remains, is an infertile police state where immigrants are kept in internment camps and terrorist bombings occur with frequency. Theo (a perfectly cast Clive Owen) is the Bogart character, a former activist who, having suffered a horrific loss, has checked out and into a flask in his pocket. Contacted by his former lover Julian (Julianne Moore), now the leader of an underground political organization, Theo is assigned the task of escorting Kee, the first pregnant woman in 18 years, to the mysterious, possibly nonexistent Human Project.

The film follows their journey, as well as Theo’s reawakening, through a violent, wartorn landscape of unrest. The key to Cuaron’s stunning work here is twofold: detail and immediacy. Practically every background is filled with a politically charged image, as in the immigrant cages taken from Guantanamo, or the black hoods from Abu Ghraib. This is the most fully articulated vision of the future since Blade Runner, but for entirely different reasons – it is the nightmare of a Bush without term limits, of Iraq engulfing the globe. And as in Pan’s Labyrinth, every broken limb, gunshot and bomb shakes us to the core. Cuaron’s violence has a blistering poetic charge that’s most evident in two already-legendary, unbroken tracking shots that provide a gutwrenching you-are-there immediacy. Both films end with images of hope undercut with heartbreaking sadness, the right choice not only for their past and future stories, but for the present they so hauntingly reflect.