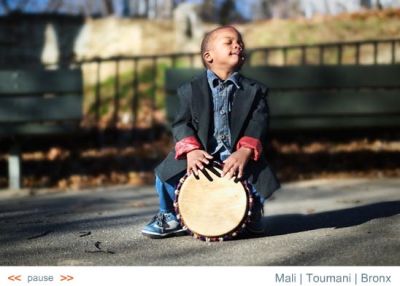 Without stepping foot outside of New York City, Danny Goldfield plans to photograph one child from every country on the planet.

A former art director for films and television commercials, Goldfield has snapped portraits of immigrant kids from 136 countries since founding the project, NYChildren, in 2004. Now, he is working with volunteers to track down 58 more subjects –families with roots in tiny or isolated places like North Korea, Vanuatu, and Seychelles. (A complete list is posted on the project website, www.nychildren.org)

Photo shoots have taken him all over the five boroughs, from a public housing project to a penthouse owned by a wealthy lesbian couple. But many of his subjects are the children of middle class workers –ordinary citizens who are “thriving,” Goldfield says, despite financial struggle. One is the daughter of an Uzbek barber, for instance, and another is the child of a South Korean pastor who recently moved to Tennessee.
While these children don’t seem to have much in common, Goldfield has made it his mission to help their communities find common ground. In 2005, subjects mingled at an exhibit in a Brooklyn cafe, where Goldfield says they danced and played, seemingly unaware of cultural stereotypes. Now, the artist-cum-activist has outlined plans on nychildren.org for a program that will help families arrange play dates for their children. When the project is complete (Goldfield is aiming for next summer), subjects from all 194 countries will gather again at a final exhibition.

In this way, NYChildren is able to transcend its current confinement to the internet and have a concrete impact on what Jacob Riis, the Progressive Era muckraker, called the city’s “other half.” Unlike Riis, though –who used his camera to expose the cramped, squalid living conditions in immigrant tenements on the Lower East Side –Goldfield leaves the harsh realities of political and economic divide almost entirely out of the picture. In less skilled hands, this effect might have come across as stagy and unrealistic –even a bit unsettling. But Goldfield’s beautifully-composed portraits capture poignant, personal moments, and the universally human emotions that come with them: a West African girl wincing as a relative tightly braids her hair, or an Algerian boy bending over in prayer at a Brooklyn mosque.

Because NYChildren lacks broader political context, viewers might find themselves wondering what spurred participants to flee their homelands for New York in the first place, or whether they have faced any obstacles, such as discrimination, to their pursuit of the proverbial American Dream. The project is certainly narrower in scope than efforts for which context is everything –such as photographer Meter Menzel’s brilliant 1994 book Material World, which uses portraits of families surrounded by all of their belongings to address global class differences. Menzel devotes about eight pages worth of photographs and text to each featured family, so that readers can acquaint themselves with the people behind the possessions; Goldfield, on the other hand, insists that his subjects’ stories are not his to tell –and that he isn’t trying to make a political statement.

It is ironic, then, that some of his most fascinating snapshots seem rich with symbolism. One of the most memorable ones shows a Malaysian girl gleefully clutching a plastic spoon with a pair of chopsticks, as if striking an ideal balance between assimilation and cultural pride. Her portrait, and all of the others, seems to suggest that each immigrant is reaching for a distinct and personal human dream –American or otherwise.