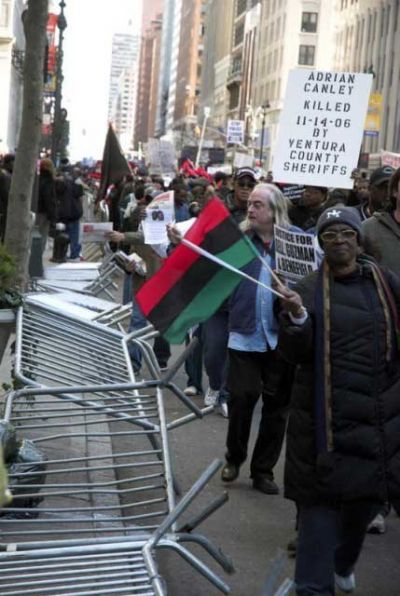 The New Year was a few hours old when Valerie Bell began a 50-day vigil for her son Sean Bell, the 27 year-old man killed by NYPD at a Queens nightclub on the day of his wedding. Family and friends unrolled a banner across the street from the 103rd precinct with the demand “Never Again” printed under Bell’s face. Around his image are 50 bullet holes, each one numbered.

Participants hope the light of the vigil will guide people back to the marches and rallies demanding justice for Bell that were gathering momentum before Christmas and New Year. Black New York came out in the thousands. But headlines of Bell’s murder are now covered by gift wrap and party confetti. The test of this movement is if it can regain the force that was building before the holidays.

“It took thousands of people marching in the streets to get even indictments in the Diallo case but those officers still got off,” said City Councilman Charles Barron. “Now we want more than indictments; we want convictions.”

Reverend Al Sharpton had planned a silent march for Dec. 15. But, the 40,000 people who came refused to keep quiet. They counted out loud the 50 shots. They accused the NYPD of genocide. Many were Blacks who saw themselves in Bell. Some were hard-left groups like the Worker’s World and International Socialist Organization who saw in Bell a martyr.

The signs ranged from “Improve Police and Community Relations Now” to “Stop the Racist NYPD”. The mixed messages fused into rage heard along the affluent Fifth Avenue shopping strip. Tourists stared, some scared, some laughing and many taking souvenir photos of the march.

Marchers became silhouettes on the windows of the upscale stores as their voices thundered down the avenue. The masses of people turned on 34th Street to end at Seventh Avenue. Rev. Sharpton ducked into a nearby hotel. Protesters milled about with no speech to sum up actions into a symbol of progress. The marchers waved signs as police guided them out of the barricades and back to the sidewalks.

Five days later, the December 12th Movement gathered activists on Nassau Street. Only two hundred people showed up. And at first the feeling of power and danger was missing. As they waited, a woman complained, “This pig said I hope I won’t be disappointed, there’s more press than us.”

The march began to move and people yelled “Fight Fascism” and “Kelly Must Go!” Police with bullhorns guided marchers through the streets into a bottle-neck and stopped them before they got near the stock exchange. Frustrated, they chanted louder as march leaders negotiated with the NYPD.

Organizer Roger Wareham bartered with Officer Smolka, his hands pointing to the streets ahead as if trying to part curtains. Smolka held his ground as organizers weighed the threat and the promise. “Go back! Go back!” Marchers turned around shaking their heads.

The march surged up Broad Street as late activists arrived by the hundreds. Scuffles with police spilled into the street like whirlpools. NYPD squeezed the march back onto the sidewalk where it moved to Wall Street and ended at a line of grim-faced cops in riot gear.

The stock exchange was just across the street. Police manned barricades as marchers cursed them. The yelling got white-hot until City Councilman Charles Barron climbed a trash can and focused the fury on the next goal. “We will march to the U.N. on Jan. 29.” he shouted and pointed, as if nailing each word with his finger. “We will be back!”

After the marches and rallies, Queens District Attorney Richard Brown convened a grand jury to review the evidence to see if indictments of police officers are necessary. In the past, convicting cops accused of police brutality has been a near-impossibility. Sustaining public pressure has proved just as difficult. The 50-Day Boycott, called for by Barron and Sharpton and Malik Shabazz of the New Black Panthers did not dent the holiday shopping. After the Sharpton’s march on Fifth Avenue, I asked a black woman if she was committing to the boycott. She sucked her teeth and said, “I ain’t given up Christmas.”

Her reaction was echoed by dozens of others. I asked Barron about the boycott and its relevance. “We don’t know what else to do,” he said in exasperation. “They are still killing us and no matter what we say or do it will be less than what they do to us.”

For now the vigil, along with the dimming media spotlight, are keeping Bell’s face visible. The lamps around the banner show who was lost. Bell had a confident squint in his eye. A smile bends his mouth, but not enough to break his cool pose.

Before sunrise Bell’s mother, Valerie Bell arrived and the family closed around her. She kept to herself and when I gave her my condolences she blinked back fresh pain. “God bless you,” she said. “Thank you for coming.”

Although the first splash of news coverage has come and gone, people still come. “Earlier tonight a man brought us donuts,” said one of attendees at the vigil. Others come to answer quieter needs. A black man stood and stared at Sean Bell’s face, slowly touched it and walked away.