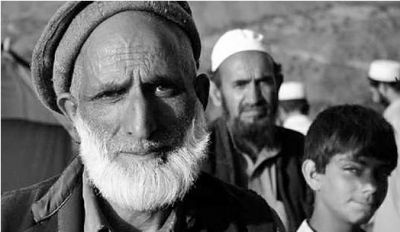 I was in Pakistan for a little over a month last year reporting on the issue of bonded labor and debt slavery in the country. Though Pakistan was only one of the ten countries I visited in an eight-month tour, it looms the largest in my memory. I was fascinated by this country so at odds with itself: as feudal as it is modern, as isolated from as it is harassed by the international community, as hospitable as it is hostile. But the real reason Pakistan is still on my mind is because America won’t let me forget it.

At parties, family dinners and friendly reunions, I’m usually lucky to get a few moments of interest in my trip before eyes glaze over or people drop out to get another drink. But mention Pakistan and people are suddenly rapt. Instantly the bored “uhhuhs” become a barrage of “Ooooooh, Pakistan! Crazy! What was that like? Were they nice to you?” Which a few minutes later turns into the usual, “Were you afraid of getting kidnapped? Were there lots of guns?” and of course, “Did you have to wear the head thingy?”

The media are the same. I could pitch a story about women’s empowerment movements in rural India or the struggling nonprofit sector in Palestine until my last breath, but everything, everything I’ve written about Pakistan has been picked up and reprinted. I’ve been invited onto two radio programs and to at least one conference just because I reported there.

What makes Americans so hungry for a shocking little piece of what we most often see as an anarchic corner of the world full of crowded, dusty cities, oppressed women and angry men? What sort of anecdotes do we crave from that exotic vortex of terrorism, poverty and corruption? Are we looking – or hoping – for proof that the world is as dangerous and sinister as the TV images and frightening news reports would lead us to believe?

Shamefully, I too often oblige these perceptions. There’s the story of being stoned by a group of taunting teenage boys in Lahore, a nasty groping incident in Karachi, a couple of unhappy confrontations where I was denied entry at crucial moments in my reporting because I was a woman – or because I couldn’t pay a bribe.

There was the day my translator basically quit because we were being trailed by the ISI (Pakistan’s Inter-Services Intelligence agency), the ubiquitous guns, the desperate debt slaves, and of course, “the head thingy,” the patched-together burka I had draped over myself throughout the trip, despite brutal temperatures that climbed beyond 105 degrees regularly. In short, I have plenty of material that could happily fuel and reinforce most American stereotypes of the country.

But the truth is, those are not the experiences I most often think of when I recall my time in Pakistan. The country most often comes back to me through the many moments that completely defy the stereotypes.

There were the regular clandestine political discussions, fueled by intellectual frustration, an endless supply of Will’s Classic cigarettes and black-market liquor. It seemed that the ban on liquor, had–for a certain class of Pakistanis at least–made alcohol a requirement at any gathering of people interested in criticizing either the government or the Islamists (and most often both at the same time).

It wasn’t just activists and academics that challenged my expectations. There was a quiet conversation with a young waiter at a downtown Lahore restaurant who dreamt of the gay clubs of New York City. There was a surprise serenade of “Show Me the Meaning of Being Lonely” in an alleyway café by a young man hard at work 60 hours a week in a call center – a spontaneous flirtation that became an instant friendship as he practiced his American accent on me (an accent he was developing so people in Texas and California wouldn’t guess they were being assisted by a guy in Pakistan) and pondered whether Americans were doomed to be unhappy.

And there were the unlikely stories. The epic account of a guide who told me of stealing his sister’s burka so he could sneak into the women-only park in Peshawar just “to be close to so many women at once.” Or the women’s studies major recounting tales of mockery and abuse while he tabled for gay and lesbian rights at Karachi University.

But back in America I’m wondering about our fixation with Pakistan. Why are Americans so obsessed with a country plagued by religious intrusions into politics? A country possessed by a violent gun culture and a ferociously entrenched patriarchy? A country whose development is stifled by a massive disparity between rich and poor, and whose leader is mired in an unpopular and unwinnable war? A country where cultures and expectations for the future clash at almost every turn? A country most often thought of in stereotypes by the rest of the world?

Maybe Pakistan intrigues us because it seems sort of familiar.

It’s funny how easy it is to create an “other” when you’re only willing to see the broad strokes. It’s terrifying how getting a little closer, letting in the details, considering the small stories that make up a culture, and then revisiting those broad strokes feels like looking in the mirror. Maybe we fetishize Pakistan because it feels like a country that has taken our own problems to a frightening extreme.

I’m thankful for the opportunity to write this now. In part, I’m hoping that I’ll redeem myself for all the times I cheaply sold out my experience in Pakistan to entertain and comfort selfsatisfied Americans here at home. I won’t let them, or myself, off the hook so easily in the future.

PHOTO: ALEX STONEHILL, Pashtun cultural independence has been preserved over thousands of years of invasions in part due to a strict code of behavior that dictates everything from everyday interactions and courtship to dress and the settlement of disputes.