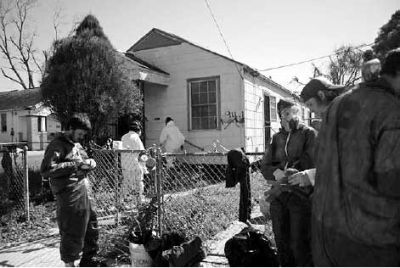 In November 2006 on his blog, solvingpoverty.blogspot.com, San Jose State University Professor Scott Myers-Lipton proposed the government hire 100,000 unemployed and displaced New Orleans residents at a living wage to rebuild their communities. Named the Gulf Coast Civic Works Project, Myers-Lipton’s proposal has been received positively by Congress. “The people that we’ve talked to on the Hill have been incredibly excited about the project,” he said.

Among the project’s supporters in Congress is Zoe Lofgren (D-Calif.). “Working with congressional representatives from the Gulf Coast Region, I hope that we can transform this good idea into an actual plan that may have a positive impact on rebuilding the region and building up the working families of the Gulf Coast who were frozen out of the process by prior efforts,” said Lofgren, in a Dec. 14 press statement.

Myers-Lipton has also helped organize the Louisiana Winter, Jan. 14-20. Reminiscent of the Freedom Summer of 1964, hundreds of college students will travel to New Orleans to put the national focus back on the city.

Rochelle Smarr, a third-year San Jose State student and president of her campus’s Student Homeless Alliance, plans to participate. “I feel we should all be out there trying to help the people in the after effects of Katrina,” she said. “Students have the chance to use their voice as activists. I feel it’s a great opportunity to get out there and see it for myself and see what I can do to help my own people.”

The students can expect to see the worst, according to Sakura Kone of Common Ground Collective in New Orleans, a community activist network that has provided housing and training for hundreds of volunteers in post-Katrina New Orleans. “They are going to learn that the people who are affected by this hurricane were disproportionately Black people,” Kone said.

“They’re going to learn that the political and economic establishment has a vision for this city that is contrary to the original residents’.” The Gulf Coast Civic Works Project expects to pay workers $12 per hour and will cost an estimated $3.12 billion, less than one percent of what has been spent so far on the Iraq War.

Since Katrina, politically connected corporations like Bechtel and Halliburton subsidiary KBR have been largely responsible for the rebuilding efforts in New Orleans. A study by the Institute for Southern Studies called One Year After: The State of New Orleans and the Gulf Coast found evidence that Bechtel, which was hired to provide temporary housing, double- billed for trailer maintenance to the tune of $48 million.

The Senate Committee on Homeland Security and Governmental Affairs has held several hearings since February 2006 that have resulted in similar findings. Last month, chairwoman Susan Collins (R-Maine) said corruption has been the major impediment to rebuilding New Orleans.

“No flaw has been more persistent and more damaging – to effective relief for disaster victims and to public confidence in their government – than the rampant fraud, waste and abuse that have plagued federal relief and recovery programs,” she said. Tracie Washington, director of the NAACP’S Gulf Coast Advocacy Center, said the NAACP will provide logistical support for the Louisiana Winter students, and that she personally will be involved with drafting legislation.

“It really will depend upon whether there is not only Democratic support, but bipartisan support; it’s obvious that the Gulf Coast needs to be rebuilt, it’s obvious that individuals want to return to the region,” she said. “I think that if everyone can agree on the prefatory problems we should be able to come together and support this type of legislation.”

In addition to raising awareness, the Louisiana Winter students hope to get input from residents to ensure that the Gulf Coast Civic Works Project is modeled to the community’s best interests.

“I think one of the main focus points of the Louisiana Winter students is to get to the Gulf Coast region and talk about this proposal, see what kind of support there is, have meetings to discuss the needs of the community, so that there isn’t something being promoted that the community can’t stand behind,” Washington said.

Kone noted that New Orleans residents may not be receptive toward more government involvement.

“They’re very skeptical of the government, but if the government did the right thing – these people need jobs,” he said. “People are starving for employment out here.”

Myers-Lipton said he expects the diverse student population that has signed up for the Louisiana Winter to enter New Orleans with open minds. “We come really humbly, we don’t have all the answers, but we have one answer, and we want to go to Louisiana and share that possibility,” he said.