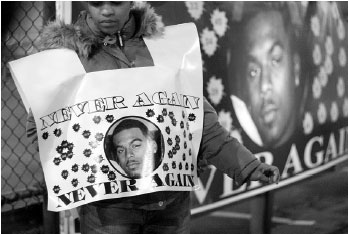 50 SHOTS, 50 DAYS: Outside the 103rd Precinct in Jamaica, Queens, friends, family and supporters hold a 50-day vigil to demand justice for the murder of Sean Bell, who was killed just hours before his wedding on Nov. 25 in a hail of 50 bullets fired by undercover police officers. Photo by Edger Mata

Last night I was out at the 50-day Sean Bell Vigil in Jamaica, Queens, across from the 103rd Precinct. In spite of the rain, the Bell family, friends and folks looking for basic justice were there. It was incredibly moving. It made me think of Rosa Parks in Montgomery, Alabama, in 1955, as well as the lunch counter sit-ins in Greensboro, North Carolina, in 1960. In both instances, it was just a few dedicated individuals and their very simple acts of civil disobedience that brought attention to very serious human and civil rights violations. They made sacrifices of their own comfort and their own safety, and changes did happen, as manifested in the civil rights movement.

Here we are again. The struggle for real justice and real freedom in America never really ended, in spite of what some of us have been led to believe. It has been over a month since Sean Bell was murdered and his two friends, Trent Benefield and Joe Guzman, were badly wounded in a barrage of 50 shots from undercover New York Police Department officers. There is still no indictment, and there is a growing concern, in communities around New York City and throughout America, that these police officers will get off completely, if a trial even occurs.

Let me make it very clear that the Bell family, from my conversations with them last night, understand that there are good police officers. Let me also make it clear that they do not want the rhetoric of violence or revenge or disrespect for the NYPD in general around their vigil. Nor are they interested in having individuals or organizations trying to use the tragedy of Sean Bell’s death for other agendas. They simply want justice for what happened to Sean Bell. And they certainly could use help and support from concerned human beings such as yourself.

I am hoping that churches, church leaders and other religious and spiritual leaders will encourage their believers to support this important effort. Indeed, as we celebrate the life and legacy of Dr. King at this time of year, I think it would be remarkably hypocritical for any church, any mosque or masjid, any synagogue or any religious or spiritual leader to, on the one hand, talk about Dr. King, honor Dr. King, yet say and do nothing in support of this very peaceful and very simple vigil for Sean Bell. Dr. King was a man of action, not just talk, and those of us in leadership positions who have sizable followings need to be as well.

Police brutality toward Black and Latino communities is one of the great issues of our time. If we were to read Dr. King’s “I Have a Dream” speech in its entirety, we would note that Dr. King uses the term “police brutality” twice in that famous address. The more things have changed, the more they have stayed the same.

I am hoping that elected officials, from Queens and from all across the New York metro area participate in this vigil. The people you represent need to see that you care. They need to see you on the frontlines with the Bell family.

I am hoping that civil rights organizations, service organizations, labor unions, fraternities and sororities, activists and organizers will support this effort, mobilize their bases to come out, and spread the word, near and far, to their networks.

I am hoping that college students will participate and encourage their peers to support this important effort. Any time real change has happened in America, or on this planet, young people have been at the forefront. Well, you all are needed now more than ever.

I am hoping that hip-hop heads everywhere, the famous and the unknown, support this important effort. Time again the hip-hop generation, the hip-community, has been knocked and mocked for not caring about social issues. Well, here is our opportunity to make a difference in historic way.

I am hoping that professionals and professional organizations will support this important effort. Your skill sets and access resources are sorely needed to sustain this vigil. I am hoping that men, especially Black and Latino men, will support this effort. duly noted the number of women present last night. Women, as usual, are holding down, but we need men to step to plate as well. Men are especially needed the late night to morning shifts, around 11 p.m. to 6 a.m.

As I said to young Black and Latino men driving by last night, Sean Bell is YOU. Sean Bell could have been YOU.

Kevin Powell is a Brooklyn-based writer and community activist. This was excerpted from a letter posted on http://nyc.indymedia.org.

How You Can Support the 50-day Sean Bell Vigil in Queens:
There is a need for people of all backgrounds and all persuasions to participate in the vigil in shifts, day and night, weekday and weekend. Even if you can only participate for an hour or two each week, please come out.

TIME: 24 hours, 7 days a week, begun on Monday, Jan. 1, and concluding on Monday, Feb. 19.
LOCATION: Directly across from the 103rd Precinct on 168th Street, off Jamaica Avenue and 91st Avenue, in Jamaica, Queens.
PLEASE CALL 1-866-695-2992 IF YOU WOULD LIKE TO PARTICIPATE IN THE VIGIL OR OFFER SUPPORT.
If you cannot physically participate in the 50-day vigil, here are items needed to support the Sean Bell Vigil through to its completion:
> The donation of at least two portable toilets for the duration of the vigil
> Food, lots of food
> Drinks (bottled water, juices)
> Paper towels
> Toilet paper
> Comfortable folding chairs for the elders who are participating
> Portable, battery-operated heaters
> Portable, battery-operated outdoor lights
> Batteries for heaters and outdoor lights
> Tents or tarp covering in case of bad weather
> Blankets
> Thousands of copies of the one-page flier promoting the vigil
> Individuals willing to pass out the vigil flier around New York City
> Write letters to your city councilperson, your state assemblyperson, your
state senator, your district leader, your community board president and
your congressperson, inquiring what each of them is doing to fight for procedural
and behavior reform within the New York Police Department, via
the legislative process.