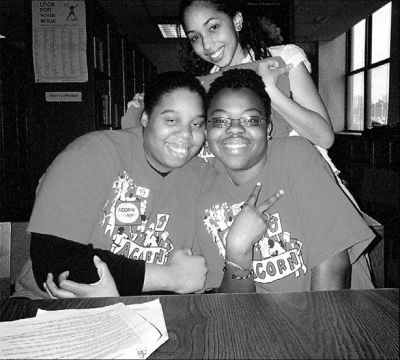 For students at the Benjamin Banneker Academy for Community Development in Brooklyn, Black History Month will be a chance not only to study examples of civil rights activism, but also to put these lessons into action.

“Black History Month celebrates the Black leaders whose struggles and sacrifices gave us the rights and freedoms we cherish today,” said La-Keisha Towner, a senior at Banneker Academy. “We want to honor their courage by raising money for Katrina survivors struggling to realize their human rights to return and rebuild their communities.”

Banneker Academy students have pledged to raise $5,000 in February for the grassroots social justice group, the Association of Community Organizations for Reform Now (ACORN) New Orleans, and are also planning on traveling to the region for their spring break to aid ACORN in cleaning up and rebuilding family homes and working class neighborhoods.

The students are also issuing a challenge for one thousand other schools, groups, churches, philanthropists or businesses to step forward and launch their own campaigns to raise a $5,000 matching donation to help ACORN New Orleans toward a goal of raising $5,000,000.

“By raising these funds and going down to New Orleans we can not only repair homes but the culture. During Black History Month we remember the legacy that our ancestors have left us; New Orleans is a part of that legacy,” said Banneker junior Beatriz Grullon.

The students kicked off their fundraising effort on Feb. 1, the 50th anniversary of Dr. Martin Luther King Jr.’s first speech in New Orleans, with the goal of helping more Americans to realize their responsibility to support the storm’s survivors in rebuilding their lives and communities.

Led by their teacher, Terry Ann Samuel, who volunteered with ACORN New Orleans for six weeks and brought the groups’ work to her students’ attention, the students have begun selling items at their school store, selling Krispy Kreme Doughnuts and snacks during lunch periods, and taking up donations from the community.

“It is easy for people to look at a problem situation and say, “‘That’s a shame.’ It is quite another to do something about it and provide realistic, meaningful ways of becoming change agents,” said Samuel. “We work with the understanding that every little bit helps; that one is the difference between 99 and 100. This fundraiser is our school’s ‘little bit,’ and we hope, sincerely, that others will join us.”

In New Orleans, thousands of homes still lie in shambles almost a year and a half after the storm, especially in working-class neighborhoods like the Lower Ninth Ward, where many still displaced ACORN members once lived. Federal assistance for rebuilding homes has only reached a handful of families. ACORN has gutted and preserved almost 2,000 storm-damaged homes free of charge, more than any group in the area, with the help of volunteer labor. Gutting is required by city ordinances as a condition for residents to return to their homes, which might otherwise be seized as “blighted properties.” ACORN continues to mount legal challenges to Federal Emergency Management Agency (FEMA) policies and lobby the federal, state and local governments to protect working-class families, many of whom are still displaced. In the midst of this tragedy, numerous community-based organizations have risen to the challenge to tackle problems of housing, jobs and informing those still displaced of their rights.

“How the government treated the victims of the storm generated a lot of emotion out of the Black community,” said Stephen Bradberry, ACORN Louisiana’s head organizer. “But now a year and a half later we need to put some of that emotion into action.” Bradberry is coordinating the Banneker fundraising effort.

“President Bush and other leaders might not make good on their promises to rebuild New Orleans, but together if we can build on the efforts of these kids, bring together a thousand or so groups and raise these funds,” he said, “then together as a community we can still make good on these promises and heal these neighborhoods and the wound this tragedy has left open in our country.”

“No one can help us but ourselves,” said Banneker Academy 11th grader Darian Springer. “We are the future. It’s up to us to try the hardest to make it better.”