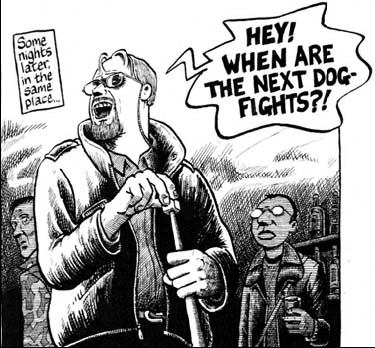 The Fixer: A Story from Sarajevo
By Joe Sacco
Drawn & Quarterly, 2003

Ferociously honest texts that change our perception of the world and ourselves are rare. Steinbeck’s The Grapes of Wrath and Upton Sinclair’s The Jungle are but two examples that create unforgettable worlds focused on the people behind the stories. In The Fixer: A Story from Sarajevo, Joe Sacco continues this tradition in the medium of a graphic novel.

Author of the groundbreaking comic series Palestine, illustrator and journalist Sacco penned a tome of misery and humanity with The Fixer. Sacco returns to a personal, potent yet half forgotten moment of the Twentieth Century – the Bosnian War.

In a deserted hotel lobby Sacco meets Neven, a chain-smoking, hard-drinking native of Sarajevo, Bosnia. Neven guides the author to smoky café bars, pool halls filled with regulars and debriscluttered streets that were scenes of war. A former member of a paramilitary outfit with connections to nefarious figures, Neven was in a ripe position to “find [for] war correspondents the human tragedies that make news editors happy.” In other words, a fixer. From arranging prostitutes for foreign journalists to paying locals with beer to retell their post-war ordeals, the moral implications of a fixer’s job are dubious at best.

The fixer himself serves as the center of the tragic maelstrom, and through him we get to know some of the “defenders of Sarajevo,” such as Ismet Bajramovic, a.k.a. Celo. With a history of drug dealing and explosive violence, he became a charismatic paramilitary leader. We also meet Musan Topalovic, a.k.a. Caco, a former folk musician with no criminal past turned paramilitary leader whose “exploits became the stuff of legend and myth.” The wartorn city is characterized by images of a desolate Holiday Inn splayed against a bombed-out section of the city. Against this backdrop Neven scavenges the terrain for physical and psychological sustenance.

The interconnected stories crisscross through time: from 2001 to 1991 to 1995 with the point of view shifting seamlessly from first person to second and back. At times the panels swim across the page; at others they are bruised photographs tossed in a forgotten scrapbook. The overall effect is a powerful mosaic of exploitation, absurdity, humor and violence. The author’s obsessive attention to minutiae, exhibited through his meticulous crosshatching, is comparable to his drive to “get the story.” He gives as much care to the stitching in a sweater as he does to the sullen faces in a crowd. Although Joe Sacco distances himself from the fullyrendered subject of the book by caricaturizing himself, his constant presence, rendered with simple lines and textures, is a nice change from the “objectivity” that most journalists assume.

In the end this black-and-white graphic novel presents a malleable world of gray where everyone’s goal is survival at any cost. With The Fixer, Joe Sacco reinforces his place as a comics master and journalist, and his work merits examination and celebration.