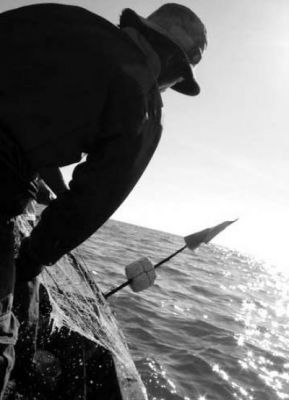 A Nai Lai resident casts his net at sunrise. Fishermen here earn roughly the same amount as local wage laborers, like the ones employed to build resorts, but they work about half as much and are free to set their own hours. Photo: Virginia Leavell

Nai Lai, THAILAND—Halima Singkala, 49, and her neighbors were repairing fishing nets when thirty soldiers marched into their village on a bright March morning nearly two years ago. Residents were still recovering from the massive tsunami that had struck just three months prior, but these officials brought guns, not relief, to this southern Thai fishing village. Singkala and her neighbors were ordered to vacate the property immediately: according to the soldiers, their newly constructed homes were built on land they no longer owned.

“We screamed. We yelled ‘get out!’ Where else could we go?” Singkala recalls, describing how she helped defend the homes with her orphaned grandson on her hip. The women were unarmed, their husbands still out on their morning catch, but their aggressive resistance to the soldiers’ orders to leave saved their homes that day.

The tsunami hit on Dec. 26, 2004 after a seafloor earthquake of 9.3 magnitude forced billions of tons of seawater up from its epicenter and sent sets of mammoth waves onto the shores of South and Southeast Asia and Africa, claiming more than 200,000 lives.

Villagers in Nai Lai saw the wave coming. They gathered their children and ran, and, although their homes and mosques were destroyed, only one villager died. Many attribute the relatively slow onslaught of the wave to a buffer of mangrove trees and coastline forests.

In the aftermath of the disaster, government soldiers weren’t the only new visitors in this sleepy Muslim community. Today, the village is littered with traces of international aid organizations. NGOs have blazed crosses and logos on roadside trash cans, and villagers sport faded tsunami volunteer T-shirts.

Some of the aid efforts have been successful: new houses were built and some families now grow hydroponic vegetables in the many plastic stations donated by a Greek NGO. But along with the blessing of aid has come a new threat which could change life along the Andaman Coast even more dramatically than the tsunami: Disaster Capitalism.

After Hurricane Mitch in Central America, Katrina on the American Gulf Coast and the tsunami here on the Andaman Coast, this opportunistic development model has been spreading.

As Phuket real estate agent Krista Hunter illustrated in an interview with London’s Observer: “[The tsunami] has helped put Phuket and south Thailand on the map. Most of the beaches became more desirable when the old buildings and homes were swept away and replaced with new ones.”

Panon Butakeaw, a legal worker with the Andaman Community Rights and Legal Aid Center, says Thailand’s post-tsunami land issues aren’t unique. “Developers have taken villagers’ land in many coastal communities hit by the tsunami, and other communities are resisting just the same.”

Just months after the tsunami hit, with most recovery efforts still in their early stages, the Tourism Authority of Thailand cheerfully reported that the country was “open for business.” But the government’s promotion of tourism development has no pretense of livelihood preservation. The disaster instead opened up many new avenues for corporate investment in the south. Many fishing communities like Nai Lai have lost ancestral homes to eviction and government land sales to developers since the disaster.

“NONE AS FREE AS THIS”

Singkala’s neighbor, Naisuthin Leebumroong, is a fisherman and part-time community organizer. He leaves home in his boat at 5 o’clock most mornings, guns through the hanging mangrove forests, and rides out to sea. He catches crab, fish, squid, rays, and sometimes sharks. He doesn’t bring in as much as before the tsunami, but he can earn enough to help support his family.

Besides, other work just isn’t as appealing. “I’ve had a lot of jobs”, he says, “but none as free as this.”

Like most fishermen, Leebumroong marks his sea nets with buoys. Unlike most he ties them with yellow flags that say “Thaksin, get out!”

The recently ousted Prime Minister won few hearts with his disaster response. The official government response in the area sometimes prohibited residents from rebuilding on their original land. While developers were quick to arrive on the scene following the tsunami, government aid was often slow to arrive, if it came at all; this lack of assistance may have motivated the desperate decision some villagers made to sell off their ancestral lands.

In Nai Lai, much of the aid money from international organizations – funneled through local government – has yet to reach survivors. Families that were promised 30,000 baht ($800 US) each plus 15,000 baht ($400) per school-aged child have seen little sign of it. One grandmother, visited by an aid worker, was offered a single 100-baht bill ($2.70). She declined.

The Thai government has liquidated public land holdings in tsunami-affected areas. In Nai Lai, the local government has sold 240 acres of public land to developers, and 1800 acres has been bought from villagers. Many report being tricked into handing over their property to visitors claiming to hold their land titles or represent the government. Singkala and her neighbors are still unsure of how their land was sold out from under them.

In response to questionable land transfers, villagers like Leebumroong have been trained by the Andaman Community Rights and Legal Aid Center to do basic legal education in their villages.

“It’s better if they can teach themselves,” says Panom Butakeaw, who visits villages and organizes regional weekend trainings for community members. The Center’s work, he explains, helps villagers understand their rights and the law so they can organize themselves and determine their own future.

“When villagers see their common problem and begin to struggle together,” says Butakeaw, “they are stronger.”

Since surviving the tsunami, villagers have struggled to preserve the lives they knew before. In the face of abandonment from their government, many communities have joined the Assembly of the Poor, the network behind Thailand’s people’s movement. Nai Lai regularly sends villagers twelve hours north to Bangkok for meetings and protests.

From Bangkok, a solid alliance has sprung up between southern survivors and Thailand’s national slum network which represents other portions of the population who feel they must champion for themselves. Representatives from the network trucked down after the tsunami to help rebuild, and have since joined forces in protesting for land rights. One Bangkok organizer moved down to Nai Lai for the year after the tsunami to help the community rebuild and move forward.

“We have the same goals,” Kovit Boonjear, a slum community organizer in northeastern Thailand, says of the alliance. “It makes sense that we fight together.”

If they don’t, Nai Lai might start looking a lot like Phuket. Sixty kilometers away the city of Phuket is brimming with luxury hotels. The whole area is a busy construction site for expensive homes and resorts, where many villagers now work as builders and landscapers. The industry welcomes the labor of villagers who have lost access to the sea or have been otherwise pushed out by tourism. Most have no idea what companies are behind the construction, as usually only local middlemen are on the ground. Amari, a five star resort and spa chain in Thailand, is one company organizers have reason to think is looking to build in the area.

“Thais build the resorts, but only foreigners live in them,” says Leebumroong, who has had odd jobs doing landscaping for the new subdivisions. He worries about the often-overlooked impact of newcomers on the local environment and fisheries. “Our two worlds can’t coexist,” he says. “One destroys the other.”

Newly politicized, many villagers find themselves fishing a little less and meeting a little more. Though the military has returned three times in the past year, the Nai Lai villagers have made sure not to be caught off guard again, and they’ve succeeded in staving off the soldiers each time. Many residents are optimistic that last September’s coup against Thaksin Shinawatra’s government will mean that the soldiers won’t return, or if they do, they won’t be prepared to use force to evict villagers.

There are even rumors of the government being of some help, but villagers are skeptical. They know what they’re up against, because they know how high in demand gorgeous corners of the world like theirs are. Nai Lai’s postcard beach, with its white sands, shady mangroves and glittering turquoise sea, is not one easily overlooked by the Thai government’s development schemes and business relationships.

To outsiders, it might seem that the tsunami waves would have washed away these coastal communities. But on the ground, a movement of fisherfolk and their allies grows stronger and unites around clear demands. In nearby Nam Khem, fifty residents are currently fighting in court for the right to return to their land. The Nai Lai villagers promise that developers can expect to meet a well-organized resistance to any village-removal schemes. Naisuthin laughs at the prospect: “We’re not going anywhere.”