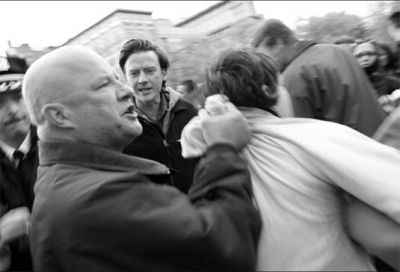 Girlbeater: Assistant Police Chief Bruce Smolka manhandles a female cyclist at the April 29, 2005 Critical Mass bike ride. As he rose through the NYPD’s ranks, Smolka gained notoriety for his tough tactics including a penchant for pummeling young women activists. Photo: © Antrim Caskey
A scandal-prone NYPD assistant chief’s abrupt retirement this month has many video activists wondering if they’ve helped topple a giant. Bruce Smolka, the Manhattan assistant chief responsible for carrying out the city’s heavyhanded crackdown on protest, announced that he is leaving this month in the midst of several lawsuits and online videos of him roughing up protesters.

“The question is ripe,” said I-Witness Video’s Eileen Clancy, “he’s a powerful chief who loves his job, but he knows the trials are coming up and that the videos are going to be seen more widely. Did we help usher him out?”

One of the more widely seen videos in question is from a 2003 action at the Immigration and Naturalization Service (INS) against both the war and the government’s persecution of immigrations. Smolka can be seen toward the back with several other officers arresting a nonviolent Cynthia Greenberg. But after a moment of grabbing, Smolka clearly knees her in the face.

As Greenberg is escorted past the camera, she shares, “One of the officers just called me a cunt and kicked me in the face,” before being hustled away. “He came over, cussed at me and screamed at me. After I fell over, he continued to cuss at me and kick me,” Greenberg, now 37, told The Indypendent. “What was so shocking about it was the police knew about us in advance; we were peacefully sitting there, they had complete control and then this happens.”

Smolka’s notoriety is longstanding: He headed the NYPD’s notorious Street Crimes Unit, whose members’ shirts quoted Hemingway (“There is no hunting like the hunting of man and those who have hunted armed men long enough and like it never care for anything else”) and boasted of “owning the night.” The unit was ordered to disband after members gunned down Amadou Diallo, an unarmed immigrant returning home, in a hail of 41 bullets. Smolka’s punishment was a promotion. As the commanding officer in Southern Manhattan, he has since orchestrated that borough’s harassment strategy against the monthly Critical Mass bike rides and was responsible for leading numerous arrests during the 2004 Republican National Convention.

Smolka, 54, is, or is about to be, listed in at least four lawsuits and has been captured on video in plainclothes and without identifying himself as a police officer, grabbing a bicyclist off her bike. “He has a history of bullying women,” says the bicyclist, Adrienne Wheeler, who was serving as an observer for the National Lawyer’s Guild, “but he’s the perfect scapegoat. [Smolka’s commanding officers] know who he is and what he does. Think of all the examples he set, the residue in all the police he led. Why would they want that?”

“One would hope that this sort of zero tolerance toward people who want to demonstrate, this absolute disregard for the First Amendment and civil rights, wouldn’t be the kind of policing that [the police] would allow,” says Jonathon Moore, a civil rights lawyer who has gone to court against Smolka several times. “But they know who he is. He’s highly aggressive against people who aren’t violent or resisting in any way. He’s not an aberration or a rogue bad cop, he’s there to set the tone for the officers under him. I’m happy to see him go, but we shouldn’t think the situation will suddenly improve with him gone.”

Dec. 1980: Smolka joins the NYPD and quickly rises through the ranks.

May 5, 2003: Smolka is videotaped kneeing Cynthia Greenberg in the face during a nonviolent immigration protest at 26 Federal Plaza in Manhattan. In his deposition last month, Smolka explained, “I was moving. She perhaps rocked and that is how her knee, my knee, came in contact with her head.”

Feb. 2006: Adrienne Wheeler claims she was assaulted by Smolka during a Critical Mass rally when he yanked her off of her bicycle.

Jan. 2007: Facing a plethora of lawsuits for violating the civil rights of protesters, Smolka is grilled during depositions by lawyers. Soon after, he announces that he is retiring from the NYPD to take a lucrative job in private industry.