When a convoy of 800 Guatemalan police and soldiers rolled into the tiny villages of La Union and Barrio La Revolución on Jan. 8-9, it was globalization at gunpoint. The village was sitting atop a large nickel deposit. For the Maya Q’eqchi’ residents, the land was their physical and spiritual home and the source of their livelihood. For Skye Resources, a Canadian mining firm, the villages and their people were obstacles to be removed as the company raced to take advantage of soaring metals prices.

Independent photojournalist James Rodriguez chronicled the confrontations that followed over the next two days. No one was killed or injured but scores of desperately poor subsistence farmers and their families lost what little they had. For Skye, whose stock price has climbed more than 600 percent in the past year, it was one step closer to reopening a giant, open-pit mining project it hopes will produce more than 48 million lbs. per year of a metal widely used in stainless steel, magnets, coinage and special alloys.
Canadian mining interests have faced resistance from the people of northeastern Guatemala since they were first awarded this concession in 1965 by the country’s then-military dictators. And they may yet have more trouble on their hands. “They think we’re dumb but we’ll see,” said one woman in La Union. “Just like the company kicked us out of our homes, we’re going to kick the company out of our land.”

For more photos by James Rodriguez, see mimundo.org. For more about Skye Resources and their mining operations in Guatemala, see rightsaction.org. 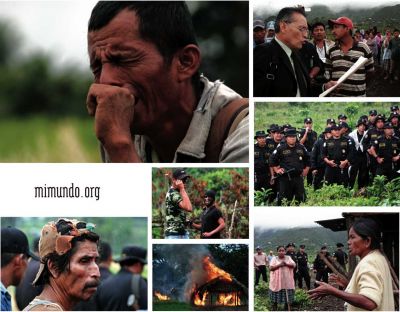 BARRIO LA REVOLUCIÓN: A resident of Barrio La Revolución reacts as his home goes up in flames.

LA UNION: After flying in on a company helicopter, public prosecutor Rafael Andrade Escobar reads an eviction order to the residents of La Union.

LA UNION: Riot police look on as the eviction goes forward. Guatemala’s majority indigenous population has been repressed and marginalized for centuries by the country’s fair-skinned European elite. Tens of thousands of indigenous people were massacred by the Guatemalan military during the 1980s.LA UNION: An older woman speaks out as her home is dismantled by employees of the mining company who are also Maya Q’eqchi’ indigenous peoples, but from a different community. “I am alone. If I die tonight, it will be because they took my home made from sticks which cost 25 Quetzales [roughly U.S. $3].”