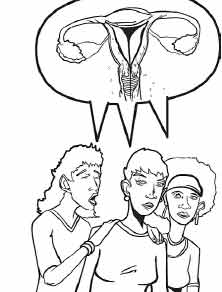 I heard about Gardasil because my friend was in the ‘one less’ commercial, she told me about it,” said 16-year-old Lillian Oquendo from Brooklyn. Lillian has recently undergone the first dose of Merck’s new vaccine, Gardasil, which prevents the four strains of HPV (Human Papillomavirus) that most commonly cause genital warts and cervical cancer in women. “I figured, why not?” she said, “I’m not really stressed about risks. If it will help protect me, it’s probably safe. My mom was cool with it.”
Teenage girls get their sex education from diverse sources. Often, in New York City, the information does not come from their schools, where health classes are either absent or focus only on pregnancy prevention and select STDs like gonorrhea, chlamydia and HIV/AIDS. Much of the current buzz about HPV has come from television ads featuring girls who want to be “one less” – one less death due to cervical cancer. While many girls have seen the ad, which features energetic girls jumping rope while chanting “on-e-l-e-s-s, I’m gonna be one less,” some girls are still confused about the details of the virus and of the vaccine.
Jaene Knight is an 11th grader at Urban Assembly Media high school in Manhattan. She claims that the only sex education that she has received was a single day of workshops at the beginning of her junior year. Students were taught the dangers of HIV/AIDS and the importance of condom use, but did not learn about HPV, despite the fact that 50-75 percent of American men and women will become infected in their lifetime. Jaene’s classmate, 16-year-old Megan Fernandez, also claimed that she had not heard about HPV until she saw the TV ads. “I know it has something to do with cervical cancer,” she said, “but I want to know more about how you get it.”
Although there is no standardized health curriculum that includes education about HPV, many New York City schools do teach their kids about the risks that they face. Beth Israel Medical Center partners with Washington Irving High School to offer a school-based clinic providing mentoring and peer education to students. Washington Irving High School Senior Simmone Leslie, after learning about HPV in a jeopardy game in her health class, worked with other students to petition the city to get the vaccine offered at her school’s free clinic. She has already received the first dose of the vaccine. “I would encourage any female who is a teenager to go out and get this shot,” she said. “It doesn’t hurt to go that extra mile and get that shot done.”

A GREEN LIGHT FOR IRRESPONSIBLE SEX?
Dr. Ed Lewis, a pediatrician in Rochester, New York, has experienced a torrent of interest in the HPV vaccine from adolescent girls and their mothers. He has presently given out several hundred doses, some girls already on their second dose, which is offered two months after the first dose has been administered.
“The most common misconception I’ve heard is that people don’t need [the vaccine] if they’re not sexually active or have been exposed to or infected with HPV. But they should still get it to protect themselves,” Dr. Lewis said.
The vaccine protects girls and women against four major strains of HPV; however, according to the Centers for Disease Control (CDC), there are about 40 strains of the virus. Several healthcare providers have suggested that this number is actually even higher, closer to 90 or 100 different strains. The vaccine protects against the two strains that cause about 70 percent of cases of cervical cancer and the two strains that cause about 90 percent of cases of genital warts.

“Even if a girl has been infected with HPV, she should still get the vaccine to prevent against the type of HPV that causes cervical cancer,” Dr. Lewis said.

“My mom would probably not want me to get it because she’d think it would promote sex or something,” said 17-year-old Che’te Bey from Long Island City, Queens. Christian groups like Focus on the Family have opposed mandatory administration of the vaccine fearing it will promote promiscuous behavior and girls will feel better protected when they have sex early or have sex with multiple partners.
“I wish that I had been vaccinated,” said Sara Edmunds, a woman who currently has a strain of HPV that leads to cervical cancer. “I wish that we all had. I wish that the FDA hadn’t sat on the vaccine for a while before approving it, and I wish that all 11 and 12 year old girls can get vaccinated now.”

“Is the vaccine a green light to go have irresponsible sex? No. It is to protect girls from potentially contracting a serious disease,” said Dr. Gale Blakley, an ObGyn, at the Helen B. Atkinson Center in Harlem and the Associate Medical Director for Women’s Services at the Community Healthcare Network in New York City. She also warns that just because someone has been vaccinated, they should not forget about the dangers of cervical cancer altogether.
While the vaccine is effective in preventing the two main strains of HPV that lead to cervical cancer, there are still 12 or more other strains that can result in the disease. Dr. Blakley estimates that close to 99 percent of all cases of cervical cancer are caused by some kind of HPV infection. She urges patients to get vaccinated, but to also get pap smears on a regular basis (1-2 times per year). Pap smears can detect cervical cancer in its early stages and consequently save lives. “Now with this vaccine coming on board, the vaccine along with the Pap smear, we’re going to see even fewer cases of cervical cancer in the near future,” Dr. Blakley said.
WHO IS COVERED AND WHO IS NOT?
Gardasil is the most expensive preventative vaccine on the market. At $120 per shot –$360 for the three-shot regimen – questions arise as to who can afford the vaccination and who cannot.
“A lot of physicians are concerned about the costs of the vaccine. Insurance companies might not cover the full cost of [Gardasil],” said pediatrician Dr. Ann Hellerstein. The Federal Vaccines for Children program (VCF) will provide the vaccination free to females under the age of 19 who are either uninsured, on Medicaid, or who are either American Indian or Alaskan Natives. Doctors and the FDA are recommending that Gardasil be administered largely to 11 year olds, as they are also getting vaccinated that year for Tetanus/Diphtheria among other immunizations.
While the recommended age for administration is 11-12, Gardasil has been approved up until the age of 26. Unfortunately for the 3 out of 10 women age 19-26 who are uninsured, trying to protect oneself against cervical cancer could mean some hefty out-ofpocket expenses.
Many, but not all, public and private insurance companies plan to cover the HPV vaccine, and policies about who will be covered and to what extent has yet to be determined. Presently, Empire Blue Cross Blue Shield has confirmed that they will cover the costs of the Gardasil vaccine for teenagers. Additionally, Merck offers a little-known patient assistance program for women aged 19-26 who are uninsured or underinsured. The program requires an application process and forms demonstrating income. To qualify, women must be low income (below 200 percent of the poverty line), be uninsured and see a private physician who already distributes other Merck products.
Currently in New York City, Planned Parenthood and New York State Department of Health-run clinics do not offer the vaccine for free or reduced prices yet; however, both organizations expect to offer the vaccine in 2007.

The Facts on HPV and Cervical Cancer
HPV is a sexually transmitted disease that causes up to 70 percent of cervical cancer cases in women. The vaccine is effective in preventing the two main strains of HPV that lead to cervical cancer. However, a dozen or more other strains exist that can result in the disease.
Condoms significantly reduce many HPV transmissions, but cannot protect against open sores located in areas not covered by a condom. It is possible to contract HPV without engaging in unprotected sexual intercourse. Clinical tests have shown that the HPV vaccine will only provide protection for four years. It is administered in a three-shot regimen, spread out over a time period of five to seven months.
The HPV vaccine introduces particles of the dead virus into the bloodstream, and the human body develops antibodies to these particles. Women never run the risk of accidentally contracting the virus through the vaccine to because the virus is never alive in their system.
Women should get Pap smears, which can detect pre-cancerous cells, one to two times per year. The American Cancer Society and the American College of Obstetrics and Gynecology suggest that women begin having Pap smears three years after their first sexual contact and no later than the age of 21.