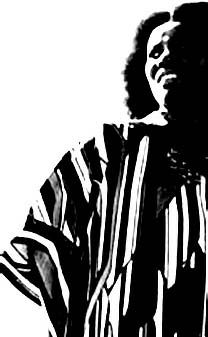 Alice Coltrane, who died Jan. 12 at the age of 69, created some of the most furiously chaotic and serenely spiritual music in the history of jazz. Although best known as the widow of the great John Coltrane – she played piano in his last band – she also recorded at least one masterpiece on her own, her 1970 album Ptah the El Daoud.

Along with Sun Ra and her fellow Coltrane collaborators, Pharoah Sanders and McCoy Tyner, Alice Coltrane was one of the key musicians who brought Indian, African, and Middle Eastern tonalities and rhythms into jazz. She was also one of the rare women instrumentalists prominent in jazz, a field that has had fewer women actually creating the music than even the notoriously macho genres of hip-hop and heavy metal.

Born Alice McLeod, she grew up in a musical family in Detroit, also playing organ, harp and vibraphone. “She could have been one of the true giants on vibes,” said bandleader Terry Gibbs, with whom she played in the early sixties. She met John Coltrane in 1963, when the Gibbs band opened for him. They were married in 1965, and she joined his band after Tyner left the next year.

John Coltrane at the time was playing some of the most intense and dissonant music ever created by a significantly popular American musician, both leading and following the free-jazz revolutionaries blowing out of the Lower East Side. Yet it was also intensely spiritual, questing music; his 1966 album Meditations roils and howls furiously for almost 20 minutes before settling down into a track called “Serenity.” Struggling hard to achieve peace seemed to be its message, one that resonated with Black activists, post-beatnik and ghetto poets and the more adventurous white psychedelic-rock musicians.

The Coltranes’ music overall seemed to be settling into such a hard-won serenity on the last recordings they made before John’s death in 1967, and Alice continued in that vein on her first solo albums. A Monastic Trio (1968) brought the screamingfor- freedom quality down into a frame of raga reflectiveness and modal jazz-gospel swing. Ptah the El Daoud is my personal favorite, with Coltrane’s rippling, beautiful harp on “Blue Nile” and Ron Carter’s descending bassline walking under Pharoah Sanders’ sax on the title track. Journey in Satchidananda (1970) blended the apartment- at-winter-dusk warmth of jazz piano with the hypnotic drone of the Indian tanpura and the meditative plucking of the Middle Eastern oud.

After she became a follower of Indian guru Swami Satchidananda, her music became more exclusively devotional. “Everything I do is an offering to God,” she told Jazz & Pop magazine in 1968. Two years later, she’d write of trying to create “an ancient, sacred sound.” She eventually quit the commercial jazz world to dedicate herself to religious music, though she returned in 2004 for a last album, Translinear Light, recorded with her saxophonist son Ravi.