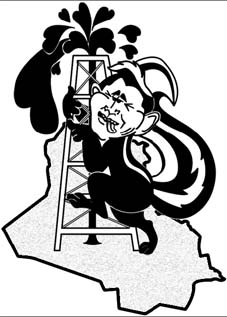 For almost four years, Western oil companies have waited at the altar for Iraq, eager to get their hands on its proven reserves of 115 billion barrels. Iraq has the third-largest reserves in the world behind Canada and Saudi Arabia, but this just scratches the sand. After almost 30 years of war and sanctions, large parts of Iraq remain little explored and there may be more than 200 billion barrels of undiscovered oil under its desert.

Despite its promise, Iraq has been unable to develop new production under the U.S. occupation and has instead seen exports plummet. To boost oil output, the Iraqi government has been wrangling over a new hydrocarbon law for almost a year. Until issues over regional control and revenue sharing are ironed out, the majors, as the big Western oil companies are known, are stuck on the sidelines.

The law, which may be unveiled in March after months of delays, has the Bush administration’s fingerprints all over it. It’s being sold as the best way for Iraq to increase its oil revenues, but, probably to no one’s surprise, it’s designed to benefit oil companies.

U.S. officials contend that the law “will be a model for cooperation in the country,” according to United Press International (UPI). But this is dubious. The law has been held up by Kurdish parties keen to annex the oil-rich city of Kirkuk in the north. The Kurdish Regional Government maintains that it must be allowed “to negotiate and sign new contracts within the region and to receive its fair share of Iraq’s oil revenue.”

If the Kurds get their way it would give them an economic basis for an independent state and possibly lead to the breakup of Iraq. Shia parties in the south, where oil reserves are even more abundant, are also looking to form a breakaway region.

A breakup of Iraq would lead to more warfare, legal disputes over the oil and possibly even a regional war that could prevent access for years. The Bush administration wants central government control over the oil so Western companies can get easy and undisputed access. Ironically, the White House’s greed is the one reason Iraq hasn’t disintegrated.

In January, The Independent (UK) reported that it had “obtained an early draft which was circulated to oil companies in July 2006.” The proposed law would be a bonanza for the majors. According to The Independent, “While the costs are being recovered, companies will be able to recoup 60 to 70 per cent of revenue; 40 per cent is more usual.” The majors could thus receive nearly twice as much revenue during the cost-recovery phase as normal. Iraq’s draft law also allows for a 20 percent profit rate once costs have been recouped, as opposed to a 10 percent norm for production sharing agreements (PSAs).

Iraqi oilfields currently in production would not be affected by a new law, but only 17 of 80 known fields, representing 40 billion barrels, are pumping oil. This leaves more than 70 billion barrels in known reserves that may be gifted to the majors, plus all the undiscovered fields.

The majors would gain control through PSAs, which grant generous terms to oil companies to develop new fields. Many analysts are critical of PSAs; one analyst with the International Energy Agency estimated only 12 percent of the world’s reserves are subject to such agreements.

Greg Muttitt, author of Crude Designs: The Rip-Off of Iraq’s Oil Wealth, notes that while PSAs are “quite common in countries with small oil reserves and/or high extraction costs… PSAs are not found in any other country comparable to Iraq.”

Countries with enormous reserves of oil, such as Saudi Arabia, Kuwait and Mexico, do not allow PSAs. In recent years, some of the few large oil producers with PSAs, like Russia and Venezuela, have moved away from them because of the unfavorable terms. The trend has been toward re-nationalization of oil, which the majors are fighting.

Getting access to Iraq’s oil would be the prize of the century for the majors — at least 10 percent of global reserves and perhaps as much as one quarter.

Before the U.S. invasion, some oil companies were licking their chops. In Feb. 2003, the Financial Times reported that the “unusually blunt” chairman of ConocoPhillips commented about Iraq, “We know where the best reserves are [and] we covet the opportunity to get those some day.”

The amount of profit depends on the specifics of Iraq’s oil law. Using “conservative assumptions,” Muttitt estimated in Crude Designs that Iraq could lose up to $194 billion over 30 years from just “12 of Iraq’s oilfields that have been listed as priorities for investment under production sharing agreements.”

These numbers were based on oil at $40 a barrel. With a barrel of oil averaging more than $60 in the past year, this could mean more than $300 billion in profits for the majors from the 12 Iraqi oilfields alone.

In 2004, former U.S. Treasury Secretary Paul O’Neill revealed to 60 Minutes that barely ten days after Bush was inaugurated, invading and occupying Iraq was the top item in White House and National Security Council meetings. “From the very first instance, it was about Iraq. It was about what we can do to change this regime,” O’Neill claimed.

Weeks later, in February 2001, Dick Cheney’s Energy Task Force began meeting with Exxon Mobil, BP, Conoco, Shell and other majors. The task force was supposedly drawing up a national energy policy, but at the time, Cheney was poring over a map of “Iraqi oilfields, pipelines, refineries and terminals” and charts detailing “foreign suitors” for Iraq’s abundant oil and gas reserves. It’s not known what was being discussed by the task force and the oil companies, but it probably wasn’t solar power.

Little came of this until Sept. 11. Then the Bush administration swung into action almost overnight. On Sept. 13, Donald Rumsfeld ordered Army planners “to sketch a plan to seize and hold Iraq’s southern oilfields,” according to New York Times reporter Michael Gordon and Gen. Bernard E. Trainor, authors of Cobra II: The Inside Story of the Invasion and Occupation of Iraq.

Then in April 2003, the Future of Iraq Project, set up by the Bush administration to plan for the occupation, finished a report recommending privatizing Iraq’s national oil industry. It also suggested issuing “vouchers to all Iraqi citizens” and proposed PSAs as the cure-all for Iraq’s limited oil production, social ills and revenue shortfalls.

Gaining access to oil has been slowed by the lack of a legal framework. Once a permanent Iraqi government was seated in June 2006, a new oil law was the White House’s top priority. Bush visited Iraq days after the new government took power. According to a June 15 report from Platt’s Oilgram News, “Bush said energy in Iraq was a central topic of discussions during his meeting earlier this week with Iraqi Prime Minister Nuri Kamal al- Maliki.” Bush also announced that he was dispatching Secretary of Energy Samuel Bodman to Iraq. Bodman said “he would bring technical experts from the Department of Energy to help the Iraqis develop” a new hydrocarbon law.

The following month Bodman delivered a message to Iraq’s oil minister “from senior U.S. oil executives.” The newsletter Inside Energy reported the message was “We are interested. … There are a lot of reserves there, but we cannot think about investing.” Bodman added that the executives told him they wanted “a more secure environment and the establishment of a hydrocarbon law. Both are required. Both are necessary.”

Also involved in drafting a new oil law is BearingPoint, Inc., a Virginia-based firm that received a $240 million U.S. contract for Iraq to develop “a competitive private sector.” UPI reported on Dec. 28, 2006, that BearingPoint had been “contracted by the United States” to negotiate “a federal oil law.”

According to Muttitt, the Iraqi oil legislation has been made available to outside groups, but not the Iraqi public. Muttitt told The Independent, “The draft went to the U.S. government and major oil companies in July, and to the International Monetary Fund (IMF) in September. [In December] I met a group of 20 Iraqi MPs in Jordan, and I asked them how many had seen the legislation. Only one had.”

The struggle over Iraq’s oil is about who it is for. For the Bush administration, the oil should serve as a profit stream for Western capital. It appears that many in the Iraqi government, who stay in power only with U.S. force behind them, agree. But like the grand plans to privatize Iraq’s economy four years ago, it may remain a pipedream. The armed resistance has shown that chaos is the only constant, and it will be a long time before anyone gets their hands on Iraq’s oil.

As The Indypendent goes to press, a new version of the Iraq oil law was published on the web by Iraqi bloggers. It appears even more favorable to the major oil companies than previous reports indicated. The public version is nearly 30 pages and doesn’t yet include key appendixes that outline the specifics of Iraq’s oilfields and reserves and who will control them.

How Much Blood for Oil?

Sources: icasualties.org; Lancet Report *Estimated Iraqi casualties as of February 2007, based upon the research of scientists at the Johns Hopkins Bloomberg School of Public Health (The Lancet, 10/11/06)