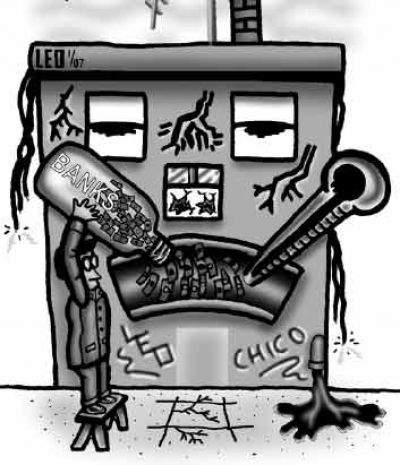 For residents of 443 Cyrus Place in the Bronx, securing repairs for the everpresent leaks, mold and broken mailboxes in their 16-unit building was always a fight. But in September 2005, a fire forced the relocation of the majority of the tenants and left the rest to live in charred apartments without security or heat.
Infuriated by the deteriorated conditions, the remaining tenants organized with the Northwest Bronx Community and Clergy Coalition (NWBCCC) and Housing Here and Now (HHN), ultimately negotiating with the mortgage lender, Citibank, to secure repairs.

“We had a meeting with the tenant association, Citibank officials and the landlord in my living room,” said tenant leader Ramona Santana, “And it was only then, after we got the landlord and the bank involved, that the situation improved.”

THE GOOD REPAIR CLAUSE
As individual landlords and the City of New York prove unable or unwilling to respond effectively to tenant concerns, banks, which often underwrite loans to landlords of properties in disrepair, are positioned as attractive tenant organizing targets.

The “good repair clause” – a common mortgage clause that requires the borrower to maintain the building well – can be used as leverage to engage lenders in forcing repairs. “Mortgage lenders have to be held accountable for building conditions – until the loan is paid off, the building is their collateral. It’s common sense for them to care about the conditions,” said James Staton, an activist with the NYC AIDS Housing Network.

Most mortgages outline obligations of the borrower and the lender and punitive actions that the lender can take if the borrower defaults on obligations. These obligations commonly include timely debt payment, adequate maintenance and registration of rents. Lenders often reserve the right to inspect the property without notification, raise the interest rates, perform repairs without the borrower’s knowledge or consent and foreclose.

If they are making their expected profit, banks are hesitant to take action, however, and courts – the institutions that facilitate the foreclosure process – are not sympathetic to efforts to foreclose based on maintenance.

LAUNCHING A CAMPAIGN
HHN’s Fix It Now campaign was launched in July 2005. One goal was to ensure that banks make building conditions a key consideration in all stages of their multifamily lending business.

As part of this campaign, residents at 552 Academy Street in the Inwood neighborhood of Manhattan, along with organizers from ACORN and HHN, held vigils and press conferences during the summer of 2005. The actions culminated with a protest in the lobby of the luxury residence of the then-landlord, Gadi Zamir, in Battery Park City.

In response, Citibank, the building’s mortgage lender, brought the landlord to the table to discuss repairs and began a more extended series of negotiations over their multifamily lending policy. Zamir eventually sold the building. Since summer 2005, significant work has been completed by a new landlord, including the installation of new stoops and structural stabilization. Hoping to build on the success with Citibank, in January 2006 HHN began a grassroots effort targeting New York Community Bank (NYCB), the biggest multifamily lender in the city, with hundreds of distressed buildings.

The campaign included tours of NYCBmortgaged buildings with politicians, protests at the home and office of the CEO, Joseph Ficalora, and ultimately face-to-face negotiations that resulted in a written commitment from NYCB to improve conditions in its mortgaged properties. Since then, HHN has secured similar agreements from several other lenders.

“When we went to Ficalora’s house we brought tenants from all over the city together and really held the bank accountable,” said Shirlene Cooper, the lead organizer of the NYC AIDS Housing Network and tenant in a building with many repair needs. “Some banks still act like they just want to meet with us without taking real action, but we will make progress as long as we keep the pressure on.”
THE NOTORIOUS MOSHE PILLER
2654 Valentine Avenue in the Bronx is owned by the notorious landlord Moshe Piller and mortgaged by NYCB. Piller has been singled out as uniquely problematic by the New York City Department of Housing Preservation and Development through housing court litigation and the Targeted Cyclical Enforcement Program, which identifies particularly distressed buildings. Despite protests at his Borough Park home, tenant-landlord negotiations and press conferences, Piller refused to make significant repairs.

With organizing support from NWBCCC, tenants then secured NYCB’s full engagement. The bank performed monthly door-to-door property inspections and corresponded regularly with Piller regarding repair work. It was only then that more significant work, such as repavement of the front courtyard, was completed.

“We have come a very long way in the past year and a half and the inspections from NYCB were one of the best strategies against Piller. But still we have a very long way to go,” said Xiomara Mejias, a tenant leader. Tenants do not yet have full confidence that Piller will undertake the more substantial and expensive rehabilitation work, such as upgrades of the plumbing system or boiler replacement. Getting NYCB to take more drastic and costly action against a borrower who is meeting his debt obligations and making some repairs will be a challenge.

Since spring 2006, dozens of buildings in the four major boroughs have received inspections from mortgage lenders at the request of HHN groups, resulting in many repairs. But whether the increase in repair activity continues or simply constitutes a token effort intended to demobilize angry and exhausted renters depends on the extent to which tenants stay united and ready to mobilize.

For tenants at 552 Academy Street in Inwood, there has been slow progress on repairs, and residents will likely soon be confronted with Major Capital Improvement (MCI) rent increases.

The Cyrus Place tenants have been successful in securing substantial work, but have faced their own share of unanticipated obstacles. In the fall of 2006, as the extent of the necessary rehabilitation work became clear, the landlord indicated his intention to seek Major Capital Improvement (MCI) rent increases, relocate tenants to other apartments in the building, and reissue their leases.

When tenants refused, the landlord brought his frustrations to housing court. The landlord submitted papers insisting that the tenants be added as respondents in the litigation HPD had brought against him for housing code violations.

The landlord argued that HPD should name the tenants as a guilty party – along with the landlord himself – in a case in which the crime was lack of repairs. Luckily, tenants were able to exploit the antagonism between the City and the landlord to win commitments from both parties to keep their current leases and refrain from seeking MCI rent increases.

“No matter how much the landlord pressured us, we refused to leave and we refused to sign new leases,” commented Ramona Santana, the tenant leader in the building. “We stayed where we were and we fought. This is why we were successful.”

Chloe Tribich is an organizer with Housing Here and Now. To find out more about the Fix It Now! campaign contact 718.246.7900 x250 or info@housinghereandnow.org.