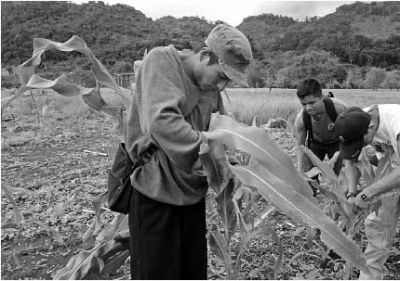 Corn is not just nutrition and livelihood for the peoples of Mexico and Central America. It is also culture and religion. PHOTO: JAMES RODRIGUEZ

The steep jump of tortilla prices in January to as high as 18 pesos a kilo from six in November has unleashed a storm of protest and suspicion. “Someone’s getting rich on my ‘ricos tacos,’ but it isn’t me,” lamented Lupita Perez. Many point fingers at the corn distribution system, which is run by transnational corporations. Rodrigo had another theory. “The tortilla is Mexico, but now they want us to eat white bread like the gringos,” he said. Others see even more sinister motives behind the sudden spike in tortilla prices, which the government of President Felipe Calderón blames on short supply and high prices for white and yellow corn – the opening of the Mexican milpa or corn patch to genetically modified (GM) corn.

World corn prices are currently at an alltime high due to burgeoning interest in ethanol production as a petroleum substitute. Although Mexico is a major oil producer, the price of corn has been pushed upward by the cost of diesel and petrochemical fertilizers and pesticides. Crop failures due to drought, flooding, and even ice storms have contributed to the price surge. Whatever the immediate causes, the dismantling of government agricultural programs and the brutal impacts of the North American Free Trade Agreement (NAFTA) have deepened the crisis in Mexican corn production.

Competition with highly subsidized U.S. farmers is driving their Mexican counterparts into bankruptcy. Whereas south of the border, guaranteed prices for farmers’ crops are a thing of the past, corporate corn growers north of the Rio Bravo can receive up to $21,000 an acre in subsidies from the U.S. government, enabling them to dump their corn over the border at 80 percent of cost. The impact of this inundation has been to force six million farmers and their families here to abandon their plots and leap into the migration stream, according to a 2004 Carnegie Endowment study. This assault on poor farmers will be exacerbated at the end of 2007 when all tariffs on U.S. corn are abolished. Meanwhile, President Calderón seeks to tamp down tortilla prices by importing up to two million duty-free tons to augment what Mexican farmers can or cannot produce. Such a solution is guaranteed to drive more farmers off the land. Even worse is that much of the new influx of NAFTA corn will be transgenic.

A great deal of the 36 million tons of corn Mexico has imported from the United States in the past six years is genetically modified – 40 to 60 percent – estimates the environmental group Greenpeace. For U.S. producers, barred from selling GM corn in Europe and Japan, Mexico is a dumping ground for the grain.

Although Mexico imports millions of tons of transgenic corn, it remains a crime to plant genetically modified seed. In 1998, the National Biosecurity Commission, an interdisciplinary body that involves the health and agricultural secretariats, declared a moratorium on planting genetically modified corn until its impact could be determined. The ban remains in place although under heavy attack from big biotech and agribusiness and transnational grain purveyors, like the Cargill Corporation, which now controls much of Mexican corn distribution. Despite the prohibitions on planting, there is plenty of transgenic corn tassling up in the Mexican milpas these days. Some of it is accidental. Massive import of NAFTA corn distributed in rural regions through state-owned Diconsa warehouses threaten vast swathes of the Mexican campo. Diconsa trucks are old and the roads rough and the GM corn blows off into the wind contaminating cornfields for miles around.
Despite the prohibitions, big corn growers have been sowing transgenic maize without government permission for years. Roberto Gonzalez Barrera, El Rey de la Tortilla, whose Maseca-Gruma, now one third owned by the Archer Daniels Midlands conglomerate, rules between 60 and 80 percent of the corn flour and tortilla market. He once boasted that he had thousands of hectares under transgenic corn. Maseca-Gruma is indeed a major player in the “transgenization” of the tortilla industry. During the administration of the now-reviled Carlos Salinas (1988-94), Gonzalez Barrera began marketing an instant corn flour mix milled from both genetically modified and natural corn. Taco shells milled and confected by Gruma and marketed by Kraft were found to contain Starlink (the Novartis brand) corn, then not yet authorized for human consumption. The Starlink corn resulted in the largest call-back of any transgenically contaminated product in U.S. history.

The Maseca mix has largely supplanted the traditional Indian way of preparing corn for tortillas – in which the kernels are put to soak overnight in a brew whose main ingredient is quicklime. As payback for market domination, the King of the Tortillas flew Salinas into self-exile in his private jet in 1995 after the ex-president’s brother was arrested for murder.

Barrera and his ADM partners and their transnational associates at Cargill-Consolidated Mexico and Mimsa-Corn Products now control the Mexican maize market. When ex-President Ernesto Zedillo (1994-2000) closed down CONASUPO, the state grain distribution system in 1997, the transnationals moved in and took control, said Luis Hernandez Navarro, op-ed editor at La Jornada, the national left daily, and a writer intimately familiar with agricultural issues. “When Mexican corn is in danger, so is Mexico,” he cautions, echoing the old refrain “no hay pais sin maíz” – there is no country without corn.

Hernandez and other veteran observers of the Mexican campo strongly suspect that the current corn crisis is being manipulated to end the moratorium on planting transgenic corn in Mexico. “The transnationals want to end the moratorium and are using this madeup crisis to pressure the SAGARPA [Agricultural Secretariat] to do away with it,” said Antonio Serratos, an investigator at the prestigious College of Mexico think tank. “It is part of their strategy for taking control of the entire agricultural sector.” As if to confirm Serratos’ hunch, Big Agro is already petitioning the Biosecurity Commission to permit widespread planting in 2007. “Bio-tech is the only solution to growing more corn and keeping the tortilla affordable,” advises Jaime Yesaki, director of the National Agriculture and Livestock Council (CNA), the principal agri-business federation in the country.

The CNA was joined in its petition to the secretary of agriculture to vacate the ban on growing GM corn by the National Association of Supermarkets and Retail Stores, which is controlled by the U.S. transnational Wal-Mart. Wal-Mart is now Mexico’s number one retailer of tortillas and other foodstuffs and, with 700 megastores, the nation’s largest employer. The subtext of the corn conflict is control of the seed market. “We have been patiently waiting to end the moratorium for ten years now,” complained Eduardo Perez Pico, director of Monsanto-Mexico, the St. Louisbased conglomerate that dominates world seed markets. “Meanwhile Mexico is falling behind the rest of the world in applying new seed technologies that can better feed its people,” the magnate recently told the Mexican newspaper, La Jornada.

The Mexican geography produces hundreds of varieties of corn that have adapted to the country’s myriad bioregions over millennia. The introduction of transgenic seed will work to homogenize these strains, according to Dr. Ignacio Chapela, the University of California-Berkeley biologist who was the first to locate GM contamination here while doing fieldwork in the tiny Oaxaca Sierra town of Calpulapan in 2001. “Millions of years of biological history will be lost if transgenic seeds are allowed to be planted in the Mexican milpa,” Chapela affirms.

Corn is not just nutrition and livelihood in Mexico, it is also culture and religion. Maíz came from the gods and the Aztecs and Mayas nourished those gods with sacrificial victims to keep it coming. The transnational attack on corn stirs passions and paranoias among the descendants of Mexico’s first peoples. At a meeting of NAFTA scientists charged with investigating allegations brought by 17 Mexican NGOs that GM corn was a threat to the nation’s 57 distinct indigenous peoples, an Indian farmer from Oaxaca seized the mic and accused the scientists, some with deep ties to big biotech, of practicing genocide by pushing transgenics. “First you killed your own Indians and now you want to kill us!” the farmer shouted angrily. The Zapatistas are Mayans, and the Mayans are the People of the Corn. According to their sacred texts, they are actually made from maíz. Manuel, a member of the ecology-agricultural commission at Oventik, venerates these roots.

“We are the corn – if it is poisoned so are we,” he insisted during this New Year’s gathering of the Zapatistas and their supporters from around the world. Now the Zapatistas are freezing their seed corn to preserve pure Mayan germ plasma so that there will never be a world without it.

John Ross is currently on the road with his latest work Zapatistas! Making Another World Possible – Chronicles of Resistance 2000-2006.

This article originally appeared on counterpunch.org.