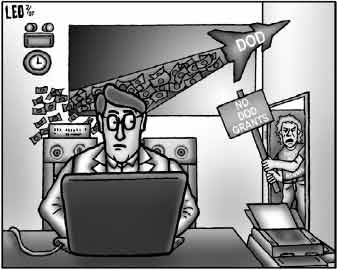 Imagine a search engine vastly more powerful than Google that could display the results as an interactive map in real-time. A $6 million Department of Defense (DOD) grant was awarded to the Parsons Institute for Information Mapping (PIIM), a research institute at The New School, to develop such a computer program to aid homeland security efforts at home and abroad.

Students are troubled by the relationship forming between the Pentagon and The New School, an institution founded in 1919 by pacifists and progressives. “The student body is concerned because a semi-autonomous department bearing the university’s name, and under the university’s flag, is doing business with the agency of American imperialism in a historically liberal institution and refusing to be accountable to that university’s students,” said Alex Cline, a New School student and member of the school’s Students for a Democratic Society chapter. The 2006 fiscal year funding supports a partnership between The New School and DOD’s National Geospatial-Intelligence Agency to develop and implement the Geospace and Media Tool (GMT), a complex search engine program with artificial intelligence capabilities that can rapidly search open data sources and then present the information geographically, in real-time. The technology would enable intelligence and law enforcement officials to sift through large amounts of data and news sources to map “hotspots of activity,” such as political groups, as a way to deploy resources more effectively.

In protest, Cline and four other students presented a “search warrant” to PIIM Feb. 9. PIIM employees allowed the students to walk through the office and take pictures. The students also issued an order for PIIM to “cease and desist from all work on projects commissioned by military entities and end cooperation with other military contractors until such projects have been approved by a joint commission of students and faculty.” The demands were backed by the Parsons Student Government, among other student groups. “I think [the students] would have a legitimate concern if we were building bombs,” said William Bevington, PIIM executive director, who was not present the day of the protest. “We are very proud of what we do. Their concern is that we would be using the money for military development, and that’s not the case.” Bevington noted that currently half of the work being done at PIIM is for the DOD.

The PIIM website lists partners that include Raytheon Co., the fifth largest military contractor in the world and responsible for developing missiles, aircraft and knowledge-based computer programs for the Defense Intelligence Agency. Bob Kerrey, President of The New School and founder of PIIM, has a long history of involvement in military affairs. He became interested in geography while in the U.S. Navy, and as a U.S. senator and vice chairman of the Senate Select Committee on Intelligence, was responsible for the development of the National Geospatial-Intelligence Agency, whose primary function is collecting, analyzing and distributing intelligence and maps in support of national security. Since coming to The New School in 2001, Kerrey has been a keynote speaker at a variety of intelligence and private sector seminars. According to the PIIM website, Kerrey “set out to find new ways to bring The New School’s substantial intellectual resources to bear on real-world problems in a more immediate way.”

“I watched our military use, analyze, enhance and distribute these new [GMT] images in order to prepare our war fighters for battle and to help our peacemakers avoid the battle in the first place,” Kerrey said last August at the 26th Annual International User Conference held by ESRI, a leading global information system company.

With the increasing military budget under the Bush Administration, universities receiving DOD grants is old news. However, students were shocked to learn the progressive New School was leaping into the military-industrial-academic complex.

Since World War II, more educational institutions have become engaged in developing war technology. The DOD awarded $91 million to support “academic research” in 1958, a minuscule amount compared to the $66 billion allocated for “research and development” in 2004. “There is not a lot of money for anything anymore, with a military budget of $500 billion,” said Frida Berrigan, senior research associate at the Arms Trade Resource Center of The New School’s World Policy Institute. “Where else are public or private institutions going to get funds from? It is forcing people to make militarized arguments for what research they are doing.” “Throughout history, the argument has been made that advances in warfare technology would produce peace,” explained Marie Skoczylas, an activist organizing against war robotics research at Carnegie Mellon University in Pittsburgh. “And yet inventions such as the cannon, the rifle, the nuclear bomb – none of them has led to long-term peace or security.” The New School grant was part of $11.5 million DOD dollars awarded to New York City institutions, including Columbia University Medical Center/Mailman School of Public Health Northeast Biodefense Center Completion Project, New York Structural Biology Center, New York University’s Center for Catastrophe Preparedness and Response and Consortium on Preparedness and the American Museum of Natural History’s Institute for Comparative Genomics.

“As the men and women of our military bravely serve our country all over the world, the funding for these New York City defense projects will vastly improve national security technology and will give our armed forces an even greater edge,” said Senator Charles Schumer Dec. 19, 2005, the day the grants were announced.

Amy Wolf and Leijia Hanrahan contributed to this article.